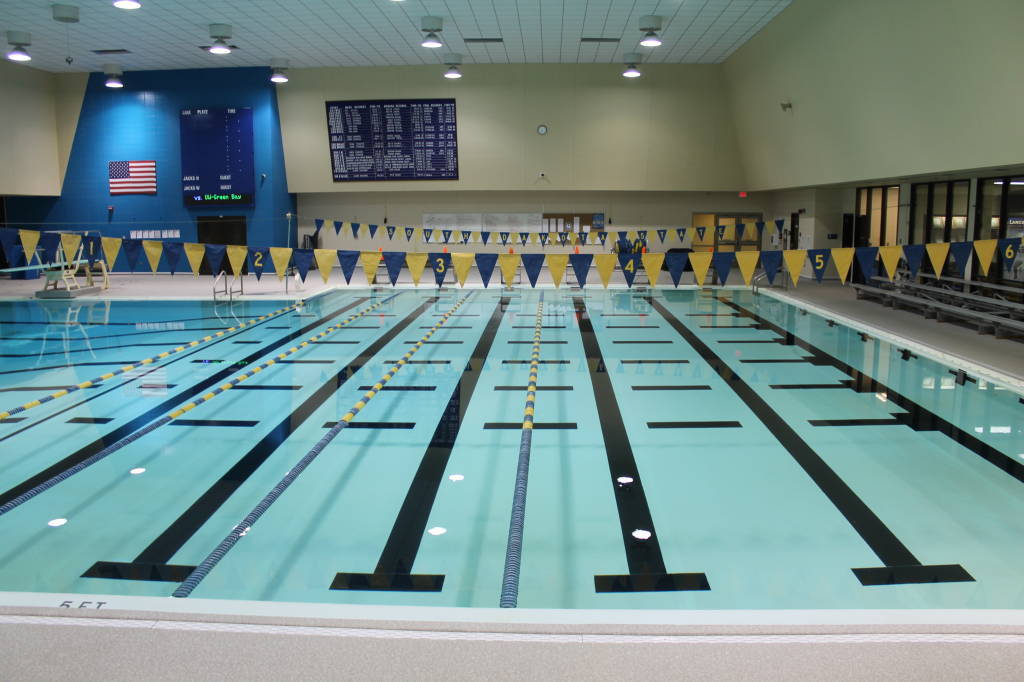 After falling to North Dakota on the road in October, the home team triumphed yesterday in what turned out to be a very close meet. The final score of the meet was 161-139.

The South Dakota State Jackrabbits gained an early lead by nabbing the 400 medley relay in 3:29.15. The team of Daniel Jacobson, Wyatt Rumrill, Garth Wadsworth, and Ben Bolinske finished over three seconds ahead of North Dakota’s A team, who touched in 3:32.20.

North Dakota retaliated in the next event, with Jacob Wielinski of North Dakota finishing over a full lap ahead of South Dakota’s Chris Angerhofer. The freshman’s time of 15:57.02 not only puts him second in the Western Athletic Conference but also moves him up to 35th in the country this year. Angerhofer touched in 16:28.83. Angerhofer put up more of a fight in the 500 but still fell to Wielinski by three and a half seconds. Wielinski put up a 4:45.03 to take the victory.

Shortly after swimming the fly leg on the winning medley relay, South Dakota State’s Wadsworth won the 200 free in 1:43.89, a time that puts him seventh in the Summit League conference this year. North Dakota sophomore Cal Mouritsen finished second in 1:45.49.

Rumrill, a freshman, took the 100 breast by touching out North Dakota senior Ian Ballantyne, winning 59.52 to 59.94. Rumrill was about half a second off of his season best of 59.04. The 200 breast featured a showdown between Rumrill and teammate Josh DeDina. Rumrill broke away to take his second individual win of the night in 2:12.53.

In a very close three-person race, freshman Sam Marlow of North Dakota took the 100 back in 53.32. His teammate Louis Belley placed third in 53.54, while South Dakota State’s Chase Peterson touched second in 53.41. Marlow, however, fell to his teammate Nick Lawson by a small margin in the 200 back. The pair finished in 1:54.80 and 1:55.32 with Lawson punching in a season best to take the win.

North Dakota landed a one-two punch in the 200 fly, with Matt Koken and Martin Pozniak narrowly shutting out South Dakota State’s Matthew Carpenter. Koken and Pozniak clocked in at 1:56.14 and 1:56.76, while Carpenter finished in 1:57.29. The pair were just off their season bests which currently rank them 17th and 18th in the Western Athletic Conference. Koken returned to win the 100 fly in a season best time over South Dakota State’s Tony Mikrut, beating him 51.68 to 52.29.

Ben Bolinske of South Dakota State was the only sprinter to crack 21, winning the event in 20.90 over North Dakota’s Colin MacQuarrie (21.25). Bolinske’s swim cut a quarter second off his season best and also bumped him from third to second in the Summit League rankings, sitting only behind Denver’s Kyle Robrock.

Joey Weber swept the diving events for South Dakota State, winning the one-meter with 282.30 points and the three-meter with 275.10 points.

North Dakota kicked things off by handily winning the 400 medley relay over the Jackrabbits. The team of Maddie Derby, Steph Frey, Danica Dutt, and Marlena Pigliacampi touched a full three seconds over South Dakota State’s A team, winning 3:54.68 to 3:57.83. They continued their streak in the 1650 free, where Gabi Liedy, Ali Church, and Katie Stover took first, second, and third to shut out South Dakota State’s Emily Rosenthal. The trio clocked in at 17:55.64, 18:06.25, and 18:10.58. Liedy was mere hundredths off her season best of 17:55.33 which currently ranks her third in the Western Athletic Conference.

South Dakota State’s first win of the night came when Katya Vakshteyn touched out North Dakota’s Gracie DiMeo by three hundredths of a second to take the 200 free. The pair, touching at 1:58.10 and 1:58.13, were followed closely by South Dakota State’s Hadlie Overhue, who finished third in 1:58.50.

North Dakota, however, retaliated by taking the next four events in a row. Maddie Derby won the 100 back in 58.40, nearly a full second ahead of South Dakota State’s Sam Prasher (59.31). Despite the win, Derby was nearly a second off of her season best of 57.66, which ranks her second in the Western Athletic Conference. Steph Frey followed up Derby’s performance with a victory in the 100 breast, touching in 1:05.09 to win easily over South Dakota State’s Kayce Smith. Smith clocked in at 1:06.21.

Smith also won the 200 breast with a 2:24.83, a time that bumps her up from sixth in the Summit League to fourth. She beat North Dakota’s Nicole Stevens (2:27.60) by nearly three seconds.

Marlena Pigliacampi put up a dominating performance in the 200 fly, winning by over five seconds with a time of 2:05.92. Danica Dutt (2:12.02) and Teresa DiGregorio (2:12.66) helped secure another one-two-three punch for North Dakota. Pigliacampi’s easy win was over a second and a half off of her season best which ranks her second in the league. Dutt returned later in the meet to win the 100 fly, finishing easily over South Dakota State’s Kristin Erf. The pair touched at 57.93 and 59.57. Dutt is currently ranked second in the Western Athletic Conference in this event.

Olivia Olesiak finally broke the North Dakota streak midway through the meet in the three-meter diving event, taking the victory with 305.71 points. Olesiak also won the one-meter event with 275.85 points.

Alli Schwab and Courtney Funk secured the 50 free for North Dakota by touching in 24.40 and 24.65 to shut out South Dakota State’s Abby Zenner (24.75). Frey and Pigliacampi did the same to complete North Dakota’s sweep of the sprint events, finishing in 53.42 and 53.81.

After the second dicing break, Maddie Derby and Kayce Smith went head to head in the 200 IM with Derby coming out victorious in 2:11.01. Smith touched just behind with a season best of 2:11.76, cutting nearly two seconds off her previous mark.

North Dakota wrapped things up with a victory in the 200 free relay. The team of Courtney Funk, Alli Schwab, Joelle Borchers, and Cassie Walth threw down a 1:38.53 to hold off South Dakota State’s top two relays. South Dakota State’s B relay narrowly out-touched the A relay, 1:39.05 to 1:39.13.

North Dakota State is back in the pool tomorrow at 11 am where they will face off against the University of South Dakota on the road. The Jackrabbits will compete again December 4-5 at the Jean Freeman Invitational in Minneapolis. Full results for tonight’s meet can be found here.