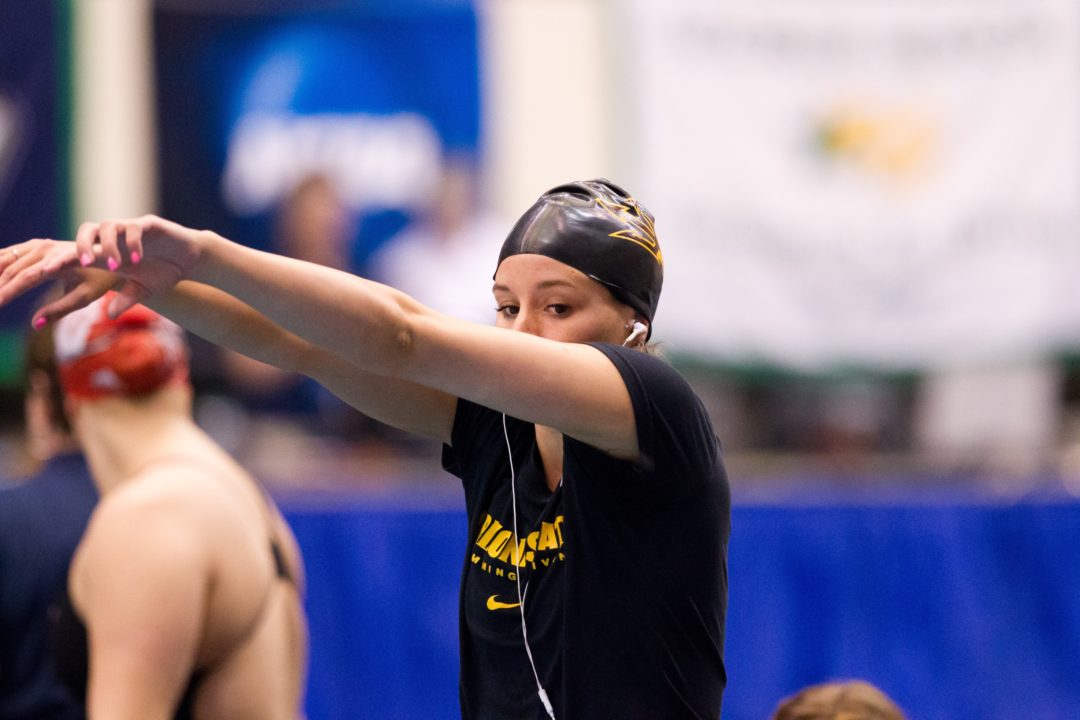 2011-2012 Overview: The Arizona State Sun Devils finished 12th at NCAA’s in 2012, which to many was a big revelation. Afterall, their 123 points more than doubled their total from the year before.

But upon closer inspection, this jump was not as big of a surprise as it may have seemed. This team has been together for a few years on the verge of a breakthrough like this, but eliminating costly mistakes, and rounding out the lineup with a few key transfers really brought the squad together.

Among the biggest improvements was Rebecca Ejdervik, who was 3rd at NCAA’s in the 100 breaststroke after DQ’ing her junior year. She was the secret weapon of the Sun Devils’ medley relays, and was able to focus specifically on the sprint breaststrokes this year, as compared to previous seasons where she pushed for the 200 and freestyle sprints as well.

Though Ejdervik is graduating, head coach Dorsey Tierney-Walker is returning an under-recognized piece that had a huge season last year: butterflier Caroline Kuczynski. She made the A-final at NCAA’s in the 100 fly, peaking with a 52.2 in prelims. As good as she was individually, she was a monster on relays – splitting a 51.2 on the medley in prelims. She’s rolled that success into a great summer of swimming, including a third-place finish in the meters version of that same event at the Canadian Olympic Trials.

She’s really going to have to step up and be the anchor of this team next season. If she can do that, these medley relays could continue to be stout, as Arizona State has brought in a huge transfer for her senior season: Taylor Wohrley from Indiana. She didn’t have a great junior season in 2012, but she is a former Big Ten Freshman of the Year, and her best time in the 100 back is a very-quick 52.2. Even with the graduation of Kelli Kyle, Wohrley should be an outstanding one-season fill-in.

Hopefully, by the season after, Juanita Barret0,will be ready to take over. Barreto, from Iowa, didn’t race for the Sun Devils last year, but is still listed on their roster. She could be a very good collegiate backstroker for this group. She was a 54.3 in high school, but focused on long course racing last year as she tried to qualify to represent Colombia in the Olympics

The struggle will be finding a replacement breaststroker. Their top three from last season all graduated in both the 100 and the 200. That leaves British senior-to-be Robyn Matthews, who was a 1:03.01, as their top returning option, and no new big-time breaststrokers incoming that we can find. One swimmer who could step up is Tory Houston, who will be a sophomore. She only swam a 1:03.9 in her first year at Arizona State, but was a 1:02.0 in her senior year of high school. Remember that as a swimmer, Tierney-Walker was a world-class breaststroker, so we should see a particular expertise in developing another one of those this coming season.

The biggest surprise last year was the 800 free relay that broke the school record by four seconds. That group of Shannon Landgrebe, Cassie Morrice, Tristin Baxter, and  Michigan transfer Mattie Kukors, and finished 13th at NCAA’s last season. With all four swimmers returning, and three of them as seniors, this looks very much like a top-8 relay in 2013.

Sprint Depth, Recruiting Plug: The team’s real weakness last season was depth all-around (they had a very small roster for a women’s program, only 21 swimmers and divers combined). But the real downfall was sprint freestyles. They didn’t score in either the 200 or 400 free relays at NCAA’s, and at Pac 12’s their 200 free relay was the slowest among all A-relays, and was slower than four B-relays. This team couldn’t buy a 22.

But next year, they’re getting big help in that department as the whole of their recruiting class, as well as a big transfer, is focused on sprint freestyles.

Melanie Busch comes in from the axed Maryland Terrapins squad and will have three years of eligibility remaining. She has a best flat-start time of 23.38 in the 50 freestyle, which she did in her senior year of high school, but focused a lot on the 100 and 200 backstrokes in her first year of college swimming. The glimmers of sprint potential showed, though, when she anchored Maryland’s 200 free relay with a 22.74. That wouldn’t have been enough to make the 200 free relay NCAA-worthy, but it would have helped a whole lot.

She’ll also add even more depth to the backstroke group, along with Barreto and Wohrley, with a best time in the 100 of 54.84.

More sprint relay help, though, will come in the form of freshman Jamie Friderichs. She comes from a Kingwood High School/Blue Tide program in north Houston that has a strong reputation in the sprints (though they’ve also turned out great middle-distance swimmers like Matt Barber). Friderichs has best times of 23.47/50.91 in the 50 and the 100, and split a 22.9 on a relay anchor at the 2012 Texas State Championship meet. In both cases, that would knock another few tenths off of the Sun Devil relays.

Wohrley didn’t do much freestyle at Indiana, but with a best of 50.2 in the 100, she’s another great option.

The other big recruit is Savannah Fernandez from Bolles. She’s a 1:06.8 breaststroker who should again benefit from swimming under Tierney-Walker.

Distance Stars Break Out: One of the best college swimmers in the country that most have never heard of is Arizona State’s Tristin Baxter. She is a member of the United States Open Water National Team after finishing 5th at the Open Water Olympic Trials 10k in April. That marked the first time that Baxter was a part of the lead pack throughout in a major open water event.

There’s no 10km race in NCAA swimming, but that result was the continuation of a fantastic sophomore season in the pool. Baxter placed 8th at the NCAA Championships in the 1650, and found a little bit of speed with a 1:47.2 on the aforementioned 800 free relay. She also had the best 500 of her career, peaking with a 4:43 at NCAA’s for a top-25 finish. With the benefits of National Team support behind her, she should grab another top-8 finish in the mile this year, as well as big points in the distance-weak Pac-12. With some focus on even just a bit more speed, her 500 could be a scorer too: her closing 50 of 27.22 in the 500 was one of the best closing splits at NCAA’s. A 4:12 in the 400 long course in 2010 indicates that there’s more to come in the shorter of the distance races.

Meanwhile, the aforementioned Cassie Morris is the school record holder in the 500 with a 4:41, though she tends shorter toward the 200.

Diving: Diving will be a spot with a big need next season, as Elina Eggers and her 22 NCAA points have exhausted their eligibility. Canadian Hailey Casper, who narrowly missed NCAA qualification last year, will be the best bet to fill that role for the Sun Devils. Her best event is the 3-meter, where her scores have topped-out in the 320 range – certainly worthy of NCAA points if she can hit that point consistently.

This diving program, under the direction of Mark Bradshaw, is one of the better in the country, especially on the men’s side, so expect a few high-profile recruits to start coming their way.

2012-2013 Outlook: The three big losses will hurt. There’s no doubt about it. The incoming transfers, though, should almost make that up. There’s a lot of pressure on a few pieces to perform if the Sun Devils want to repeat a top-12 placement, but these swimmers seem much more confident after their success last year. Tierney-Walker is one of the hottest coaches on the college scene right now, getting buzz for just about every gig that opens.

But maybe the most important part of the Sun Devils’ season will be in the fall. They have a big senior class this year, and they need to capitalize on their recent success. What’s more, the Sun Devils are now back to a full coaching staff for the first time since landing in the cross-hairs of getting cut. That gives them a lot more minds and bodies to put toward recruiting.

Expect another finish in the 12-14 range next season.

Interesting the lack of interest in the schools 200 free record holder. Shannon Landgrebe was 7th in the A final of the 200 free and swam in the B final in the 100 at NCAA’s.