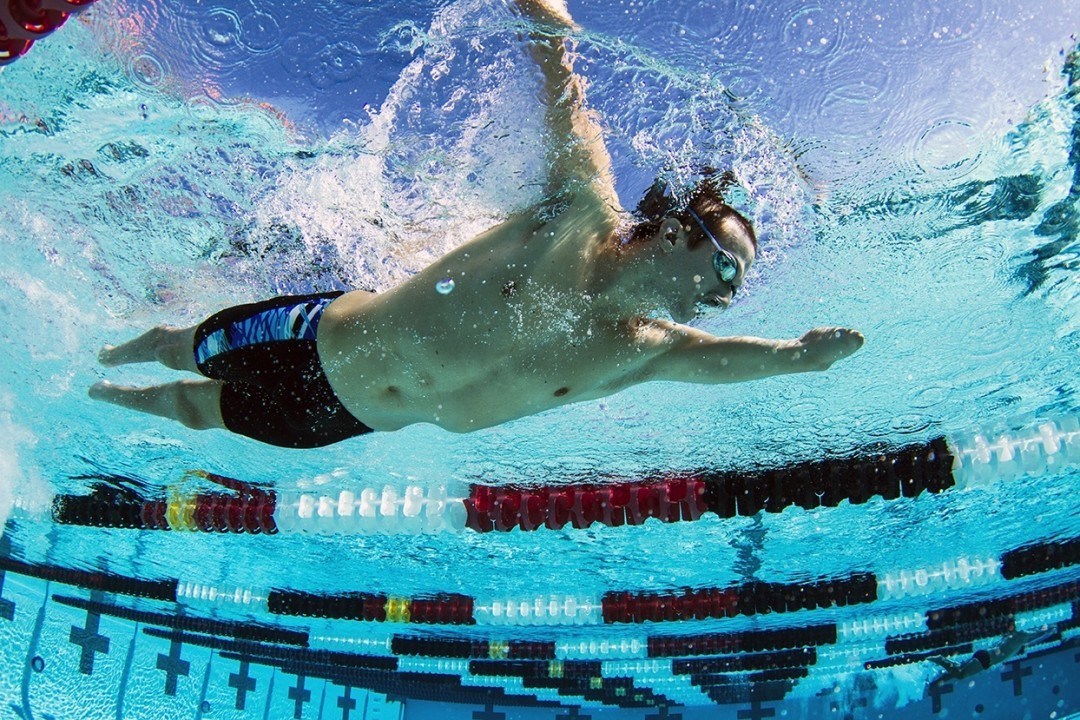 Paralympian Roy Perkins shared heated thoughts about Meyers sitting out of the Tokyo Paralympics after being denied her mother as her personal care assistant. Archive photo via Dolfin Swimwear

Three-time Paralympian and 10-time Paralympic medalist Roy Perkins disagrees with the public’s “outrage” after U.S. Para swimmer Becca Meyers was denied her mother as her personal care assistant in Tokyo.

He shared his heated thoughts to social media on Friday:

“It is an insult to all the athletes who have gone through their own hell over the years and either got through it or had to quit silently and without excuse, to see somebody essentially play the public sympathy disability card because she didn’t want to follow same rules as everybody else,” he wrote.

Six-time Paralympic medalist Meyers announced she was leaving the U.S. Paralympic team on July 20th after being told she could not bring her mother as her personal care assistant to the Tokyo Olympics.

“I was bothered by this lack of information and proper context driving public outrage and impossible expectations,” Perkins told SwimSwam via email a few days after his initial thoughts.

“Most of the negative responses toward USOPC and the expectations for what they should or shouldn’t be doing, stem from a lack of understanding about how a team of 30-40 athletes at the Games actually functions.”

“The outrage over USOPC’s denial of a PCA for Becca Meyers is being driven in part by well-intentioned-but out of touch- disability rights advocates whose expectations do not match the logistical realities of the Paralympic Games,” Perkins continued.

There was a wave of public support for Meyers, or outrage towards the USOPC and Games organizers, after she announced she would not compete in Tokyo.

This took the form of statements from sources including:

The  United States Olympic Paralympic Committee’s statement to Washington Post reiterates these “logistical realities” Perkins mentioned which have been heightened due to the coronavirus pandemic:

“We are dealing with unprecedented restrictions around what is possible on the ground in Tokyo. As it’s been widely reported, [the Tokyo Organizing Committee of the Olympic and Paralympic Games], at the direction of the government of Japan, is not permitting any personnel other than operational essential staff with roles related to the overall execution of the games, into the country.”

The USOPC further explained that there was already a designated Personal Care Assistant (PCA) with “more than 27 years of coaching experience, including 11 years with para swimmers” assigned to the U.S. Paralympic swim team.

“Because of the complex nature of these games, the role of the PCA has been filled by a qualified staff member who is able to serve in dual roles and who can assist the team as a whole when needed.”

But, Meyers told ESPN that “No one on the [Team USA Paralympic] swimming staff was equipped to handle a deaf-blind person out of the pool. They’re swim coaches.”

She explained that since the 2016 Rio Olympics, where she did not bring a PCA and said she struggled to find the dining hall, she has brought her mother as her PCA to international meets.

“Safety is a priority. Comfort and routine are not,” Perkins stated about Meyers’ decision to leave the U.S. Paralympic Team after the USOPC denied her request to bring her mother to Tokyo as her PCA.

“We’re talking about thousands of disabled people and staff converging into a segment of the most populous city on Earth during a pandemic. To come up with solutions for any kind of personnel addition, you’re going to have to compromise for less than the best-case-scenario for the comfort of every athlete.

He explained that physically adding more people, meaning allowing personal care assistants to accompany athletes, can lead to safety issues “both in terms of Covid and just having mobility impaired people packed into one place. Not to mention that there is only so much space in lodging, buses, stands, and dining.”

“There could be real, performance-altering consequences to prioritizing personnel volume over making efficient use of a smaller number.”

“The actual sentiment among many of us [former and active Para swimmers],” Perkins said, “is that Becca Meyers‘ plight is really just a personal beef between herself and USOPC, stemming from them pulling the special treatment she received from them for years, which was always resented by her teammates in the first place.”

“I think that the media campaign surrounding her story was reckless,” Perkins continued. “As were some of the journalists who prioritized sensationalism over facts.”

“One story claimed that Becca would have had to navigate Tokyo by herself- an outlandishly untrue statement, as in the absence of a PCA she would be surrounded by teammates and coaches accustomed to helping each other in all manner of ways.”

The other “misunderstood point” Perkins pointed out was the “notion that USOPC or anyone else is trying to dismiss the needs of any type of disability or athlete by denying them a PCA.”

“The PCA is a limited resource,” he explained. “This year there is only one (a limit set by Tokyo) plus an additional 10 coaches to fill a similar role. In most years there are more, but even then there are limits.”

“So those who are calling for a particular athlete to get a PCA need to understand that it would come at the price of depriving another athlete of theirs. At that point you are making the same judgment call that has brought so much criticism to  USOPC.”

“While I am heartbroken for Becca and not readily inclined to speak out against a former teammate, it is even more important to me that the public not feel needlessly negative about the Games about to take place or those working to make them happen.”

Perkins iterated that he is part of “a large contingent of current and former para swimmers understand and accept the tough decision made by USOPC to deny her a PCA.”

“The premise that certain swimmers will get a PCA while others must instead lean on teammates and coaching staff depending on their level of need, is seen from within as an uncontroversial and pragmatic solution.

“Para swimmers compete in a sport where the international governing body literally adds up points based on your disability and decides how capable you are of moving through the water.

“Becca is not responsible for every turn this national media wildfire has taken or every extreme reaction that stemmed from it,” Perkins clarified. He urged journalists to “do better research and get the other side of a story that they should have discerned as being incomplete.”

“The negativity is felt by the athletes currently preparing to compete; I’ve been in that situation and nobody wants it hovering over them,” Perkins said. “It’s even worse when you know that the accusations being levied are wrong.”

SwimSwam reached out to Meyers for comment but she did not respond.

Thank you SwimSwam for including the additional perspective of the para-athlete, “on the ground” points that must be considered by the swim family when assessing the Tokyo situation. Perkins’ response is reasoned and well-delivered with details and perspective. I appreciate his taking the time to address the issue so close to his own competitions in a few weeks.

I very much appreciate your posting of this contrarian perspective (contrary to the prevailing media narrative of the situation). Mr. Perkins raises some valid and pertinent issues.

his statement just seems unnecessary. i understand the frustration but a “suck it up” attitude about an inherent flaw in USOP rules seems weird.

Thanks Roy for the detailed response on this situation. Now I want everyone to apologize for criticizing my comments in the other article. She is a Diva case closed.

I’d also like someone on the Rio team to tell us about situation of her “starving” in the Olympic village. I’m guessing she slept through lunch one day and called her mom crying so her mom went and bought her a meal and brought it to her. She had teammates/roommates do you think they purposely would leave her in the room to starve for days? If they did that they must have really hated her. I admit I don’t know the exact story however I can recognize that it was another… Read more »

Wow. How outrageous. “Things have been bad for all of us, but since she has highlighted it and elected to withdraw from the games due to it, she’s a diva.”

Way to support your teammate. Rather than try to get the care that all Paralympians need from the USOPC, you try to vote her off the island. That’s exactly what we try to teach young athletes about sportsmanship and team camaraderie.

As any semi-competent labor organizer would tell you, the way to improve working conditions is not to throw coworkers under the bus in defense of management.