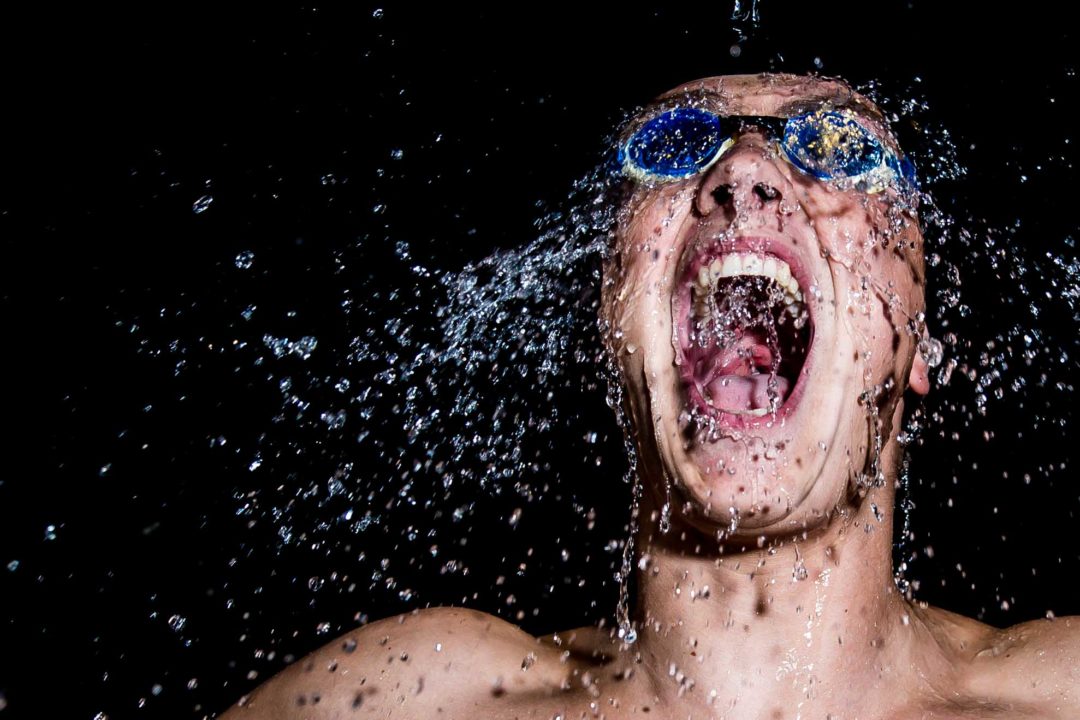 Years ago, I wrote an article debunking 10 of the most common myths I know of in the sport of swimming. Today, I want to revisit those myths. Current photo via Jack Spitser/Spitser Photography

Years ago, I wrote an article debunking 10 of the most common myths I know of in the sport of swimming. Today, I want to revisit those myths (some are still prevalent) with my thoughts about them in 2019.

Myth #1 To go faster in swimming one must push out the back of the arm pull.

Thanks to Pressure Meter technology, I have learned that the peak force during the propulsion phase of the pulling arm occurs at different points, depending on the technique of the swimmer. The peak force of the pulling arm is profoundly influenced by the coupling motions, as well as the strength of the arms. The coupling motion of body rotation occurs at two different times separated by about 2/10 of a second. The peak shoulder rotation velocity occurs first, as the recovering hand enters the water, and the peak hip rotation velocity occurs later, as the pulling hand finishes the pull and exits the water. Depending on where the swimmer puts the emphasis on the pull and how energetic the two parts of the body rotation are, the peak force of the pull can occur in the front quadrant, just in front of the shoulder, back quadrant behind the shoulder or at the end of the pull, pushing out the back. Swimmers can definitely increase their distance per stroke (DPS) by pushing longer and harder out the back, but it comes at a cost by slowing the stroke rate (SR). The relationship between DPS and SR is crucial. The multiple of both determines a swimmer’s speed. Pushing out the back may increase a swimmer’s speed (particularly in events longer than 50 meters), so long as the SR doesn’t slow too much.

Myth #2: Aside from shaving, wearing a cap and a high-tech suit or wetsuit, the only way to reduce drag is by streamlining off the start and turns.

If there is one thing that I have learned in 15 years of coaching swimming technique, it is that frontal drag forces in water are way underestimated and underappreciated. In a medium some 800 times denser than air, the frontal drag forces of a swimmer are profoundly affected by very small changes in our body’s position in the water, including the head, body, arms and legs. Using our Drag/Propulsion Meter in Florida, we have been able to measure exactly how much certain errors in technique will increase the frontal drag force at race speed. Here are some examples of how much increased drag we found with each of these errors: Biceps over ears streamline 11% (compared to streamlining with arms behind the head), thumb sticking out on streamline 11%, fingers separated widely on streamline 18%, feet hanging 41%. You get the idea.

We live in a detailed sport where winning and losing is determined by hundredths of seconds. As swimmers and coaches, we need to pay more attention to the details, in particular, ways to reduce frontal drag at all times while moving through the water.

Myth #3: The reason one should rotate the body along the long axis in freestyle is to reduce drag.

While giving a short talk on physics (fundamentals) in swimming at each of our camps, I still find that this is a common answer to my question, how does a swimmer reduce frontal drag? Body rotation is extremely important in augmenting propulsion, but not in reducing frontal drag forces. The drag forces on the human body on its side or stomach are very similar. Thanks to our Pressure Meter technology, we have found that the speed of the body’s rotation, whether at the shoulder or hip, can profoundly increase the propulsion force of the pulling hand.

Myth #4: The reason you keep the elbows high on the underwater pull is to increase power.

Myth #5. The reason we pull freestyle underwater with a high elbow is to increase the surface area of our pulling arm.

Thanks for leaving the comments section open.

I’ve watched your video of swimmers kicking with the arms vertical and at right angles and performed the drills myself and clearly feel the difference in drag.

What if your drills were performed deeper below the surface? Would the drag forces begin to even out?

While the drill with arm straight down vs bent 90 degrees to the side is a good ‘drag demonstration drill’, it doesn’t replicate exactly what is happening during the pull. It does a good job of subjectively being able to feel the difference in drag caused by altering the shape of an object. If you were to take a 6 foot pole and hold it straight out of the window of your car driving 60 mph you will find there is much more drag than bending the pole in the middle, so 3 feet out and 3 feet up. Same surface area, same speed, different shape and different drag force. That is physics. The density of water does not change… Read more »

Gary, I love your posts, and these points are excellent. I always did wonder why it was inefficient to extend the elbow completely in the pull and this makes perfect sense. I completely agree about rotating the body not altering drag – all the body is still in the water. But I am still somewhat confused about the high elbow. In this position the upper arm is still facing forward (for an even longer proportion of the stroke than straight arm), so even if it were at the surface it would still create direct frontal drag for much of the stroke. The deeper stroke would only cause that same drag at the point the hand is facing directly down, and… Read more »