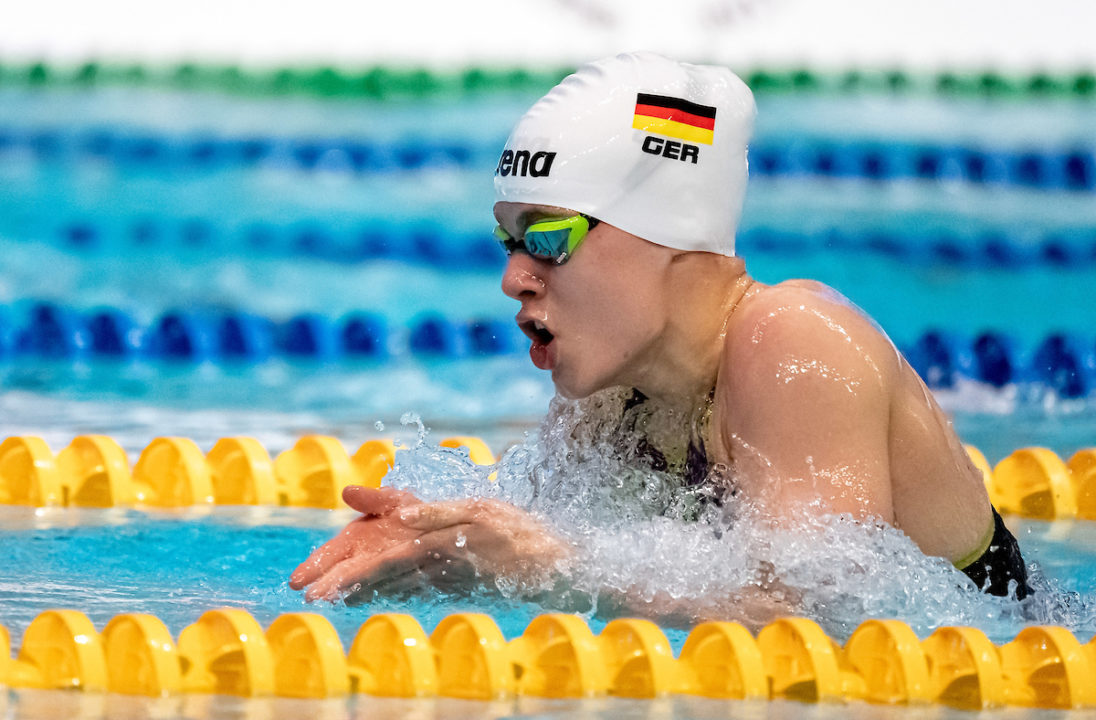 17-year old Zoe Vogelmann swam 4:41 in the 400 IM on Thursday as some of Germany's top teen prospects faced off against Tokyo Olympians. Current photo via G.Scala/Deepbluemedia/Insidefoto

The 132nd German National Championships kicked off in Berlin on Thursday. Over the next four days, some of the fastest German swimmers will try to catch a national title.

Germany has already revealed a 30-strong aquatic lineup for this summer’s Olympic Games in Tokyo, Japan. Qualified Olympians to the tune of Damian Wierling, Lisa Höpink, Christian Diener, Fabian Schwingenschlogel, Anna Elendt and Annika Bruhn will be competing this weeks against the likes of Angelina Koehler, Ramon Klenz and Zoe Vogelmann.

The last German National Championships have been held in 2019. The 2020 edition was cancelled because of the Corona pandemic. Danny  Schmidt grabbed the first title of the championships in the 400m IM with a time of 4:19.02. His personal best time stands at 4:18,82. Schmidt led the field from the start to the finish and took the win ahead of Cedric Büsing (4:19.77) and Marius Zobel (4:25.98). German record holder Jacob Heidtmann didn’t compete today. Heidtmann is part of the German Olympic roster and trains with Team Elite in San Diego.

On the women’s side, Giulia Goerigk wasn’t able to defend her title from 2019, she finished third in 4:46,15. The gold medal went to Zoe Vogelmann, she had her hand at the wall first in 4:41.32. She improved her lifetime best of 4:43.51 which she set at the 2021 European Championships two weeks ago. The 17-year-old made the final in Budapest and finished seventh.

The final of the men’s 100m fly featured Ramon Klenz as the winner in 52.88. He missed his personal best time by 0,29 seconds.  In 2019, it was Marius Kusch who won the German National title. Kusch is the fastest German 100m butterfly swimmer at the moment and he is qualified for the Tokyo Olympics but he doesn’t compete in Berlin over the next days. Like Jacob Heidtmann, Kusch trains in San Diego with Coach David Marsh.Behind Klenz, Björn Kammann (52.97) and Alex Kunert (53,46) made it onto the podium. One man faced a special challenge in today’s finals: Christian Diener came in with a time of 54.57 and less then 10 minutes later he also took part in the 200m backstroke final.

Lisa Höpink put on some speed in the women’s 100m butterfly final, she led the field after the first 50m with a body length. It was Angelina Koehler who snatched the victory from Höpink shortly before the wall. Höpink finished with a time of 58.68 behind Koehler’s 58.42. Both were slower than her personal best times of 58.07 (Höpink) and 57.85 (Koehler). Lisa Höpink is the lucky one who is qualified for the Summer Olympics, she grabbed a spot for the 4x100m medley and freestyle relay. Angelina Koehler missed the qualification, she suffered a Corona infection before the final German Olympic qualifying event in April.

The gold medal in the 1500m freestyle went to talented Leonie Maertens. The 17-year-old held off the rest of the field with her winning time of 16:34.15. Maertens improved her best time by more than 10 seconds. Maertens trains in Magdeburg where also Florian Wellbrock, Sarah Koehler and Isabel Gose are part of the team of German Head Coach Bernd Berkhahn. Leonie is the sister of Lucas Maertens who reached a spot in the 2021 German Olympic team in the 200m, 400m, 1500m freestyle. Perhaps in three years the sibblings will both join the German Olympic team in Paris. The team from Magdeburg is currently in an altitude training camp in the Sierra Nevada, Spain,  in preparation for the Olympics, also Franziska Hentke is among them. Behind Leonie Maertens, Marlene Sandberg came in with the second fastest time of 16:47.55 ahead of Evelin Edel in 16:58.10.