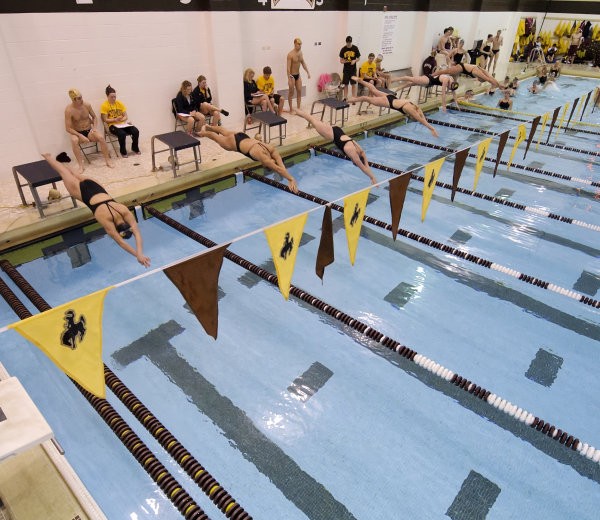 The University of Wyoming Swimming and Diving program is proud to announce the signing of 11 swimmers to National Letters... Current photo via Wyoming Athletics

The University of Wyoming Swimming and Diving program is proud to announce the signing of 11 swimmers to National Letters of Intent for the 2017-18 season. This class, comprised of eight Cowgirls and three Cowboys, draws swimming talent from all across the nation and the globe.

Find information about each new Cowgirl and Cowboy below.

Mia is the daughter of Kevin and Amy Bailey. She competes for the Claremont Club and is a leader on the Alta Loma High School team. In 2015, Bailey dropped significant time at the CIF-Sectional IV Championships, placing top-three in two events. She is a seven-time CIF medalist and two-time league MVP. She will look to add depth and improve in the middle-distance and sprint freestyle events.

Wyoming swimming assistant coach Dave Denniston: “Mia is a well-rounded student that shows leadership qualities in and out of the pool. She will help us with relays as well as the shorter freestyle events. Her rate of improvement in the last year has really shown us that the sky is the limit.”

Wyoming swimming head coach Tom Johnson: “We are thrilled to have Kate, join us next fall.  She is a terrific middle distance freestyler but is also versatile and can help us in the backstroke and the IM. Her coaches spoke very highly of her. She is from a swimming family, her brother Bryce swims at Missouri State, and her Mom runs a swimming lesson program in Wichita. Kate can make an instant impact in our program.”

Coach Johnson: “We are very happy to have Kristyn join the Cowgirls. She was a pleasure to recruit and comes from a terrific family. She will add to a very competitive distance group at Wyoming and will be a tremendous asset to the team.”

Kristen the daughter of James and Susan Covello. She swims for the Tucson Ford Dealers Aquatic. She placed second in both the 50 freestyle and 100 freestyle at the Arizona High School Swim and Dive Championship in November.

Coach Denniston: “Kristen comes from a family that loves the outdoors and she really bonded with our team. She has great closing speed in every event she swims. She is going to help our relays and sprint events. There is no doubt she is a perfect fit for our program.”

Gabrielle is the daughter of Mark and Teresa Limon. She attends and competes for Edison High School and also for the Golden West Swim Club in Huntington Beach, Calif. Limon was a finalist at the 2015 LA Invite, the American SC Championships and CIF High Championship.

Coach Johnson: “Gabrielle is a versatile and talented middle distance freestyler and butterflier. She will add immediate depth in those events. I look forward to Gabrielle’s contributions as a Cowgirl next year.”

Hannah is the daughter of Alan Leonard and Sandra McLean-Leonard. She trains with Petro Nortje at Westville Swimming Club. Her primary events are the butterfly and backstroke. She’s been selected to represent South Africa internationally at a handful of high-level meets, including the 2015 FINA Junior World Championships in Singapore.

Coach Johnson: “We are very excited to have Hannah join us next fall.  One of the South African coaches I know spoke very highly of Hannah and her swimming talent.  Hannah will make an instant impact in our butterfly and Backstroke events”

Tanja is the daughter of Branko and Susan Milanovic. She attends Leander high School and competes with Nitro Swimming. Milanovic qualified for the Texas 5A State Swimming Championship and placed seventh in the 200 IM and 12th in the 500 freestyle. She also competed in the 2016 Summer Future Championships in Austin, Texas. Milanovic is an outstanding student and a member of Leander High School’s National Honor Society.

Coach Johnson: “Tanja is a strong and versatile athlete. She has outstanding background swims for one of the best club teams in the state of Texas. She will make a great impact in the individual medley and add depth in middle freestyle. We really look forward to Tanja’s contributions next fall.”

Ray is a superb talent out of Australia. She has competed internationally for the Dolphins on several Junior National teams. Her highlights include placing first in the 200 backstroke at Australian National Age Championships in 2013, 2014, 2015 and second in 2016. She also placing first in the 100 backstroke in 2013, and second in 2014 and 2015. Rae represented Australia on Junior Australian teams at Trans Tasman 2012, Junior Worlds 2013, where she placed 11th in 200 backstroke and 22nd in 50 backstroke, and Junior Pan Pacific Championships in 2014 where she placed fifth in the 200 backstroke and 11th in the 100 backstroke. She was also named a Junior Sports Star in 2014 and 2015. Rae recently received the Julia Dangar award for outstanding performance of 2016. She already holds a long list of accomplishments and is looking to add to that list as a Cowgirl.

Coach Denniston: “Monique is a fierce competitor with a heart of gold. She is extremely outgoing and her coach in Australia praises her work ethic. She will make an immediate and significant impact on our women’s team.”

Coach Johnson: “Mitch is an incredibly versatile swimmer and a scholastic stand-out who regularly volunteers his time in his community. His exuberance and passion are contagious and we couldn’t be more excited to have him join us in the fall.”

Coach Johnson: “We are very happy to have Brayden join our program. He is a terrific athlete and very versatile and will be able to add instant impact to our butterfly, breaststroke and IM events. We look forward to his contributions to the Cowboys.”

Dylan is the son of Tim and Irva Nelson. He attends Edison High School and swam for Golden West Swim Club under coach Mark Schubert. Nelson is the youngest brother to Cowboy stand-outs Ryan and Wade. He looks to add to the sprint group for relays as well as individual events.

Coach Denniston: “Having another Nelson on the team is something everyone is excited about. We know Dylan will add class, integrity and speed to our program and that says a lot about the way he was raised.”