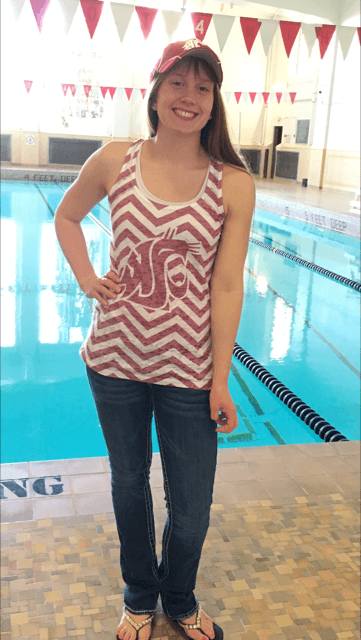 Taylor McCoy of Pullman High School and Gold Medal Swim Club has made a verbal commitment to swim for Washington State University in the fall. Current photo via Anne McCoy

Taylor McCoy of Pullman High School in eastern Washington state, and Gold Medal Swim Club, right over the border in Moscow, Idaho, has made a verbal commitment to swim for Washington State University in the fall. WSU is, in fact, in Pullman, so McCoy is no stranger to the Cougars. She told SwimSwam:

“I am so excited for all the opportunities and resources that WSU has! The coaches and swimmers are amazing and I am looking forward to competing in the Pac-12! Go Cougs!!”

As a high school swimmer, McCoy is undefeated in individual events in Washington State 2A Championships competition. She won the 200 IM and 100 back in each of her three years (2013-2015) and led Pullman High School to its first-ever state swimming title in 2013. In addition to contributing her individual points, McCoy was part of Pullman’s winning 200 medley and 400 free relays. She was named Swimmer of the Meet at both the 2013 and 2015 editions of the 2A Washington State Championships.

A two-time USA Swimming Scholastic All-American, her best times are:

If you have a commitment to report, please send an email with a photo and a quote to [email protected]