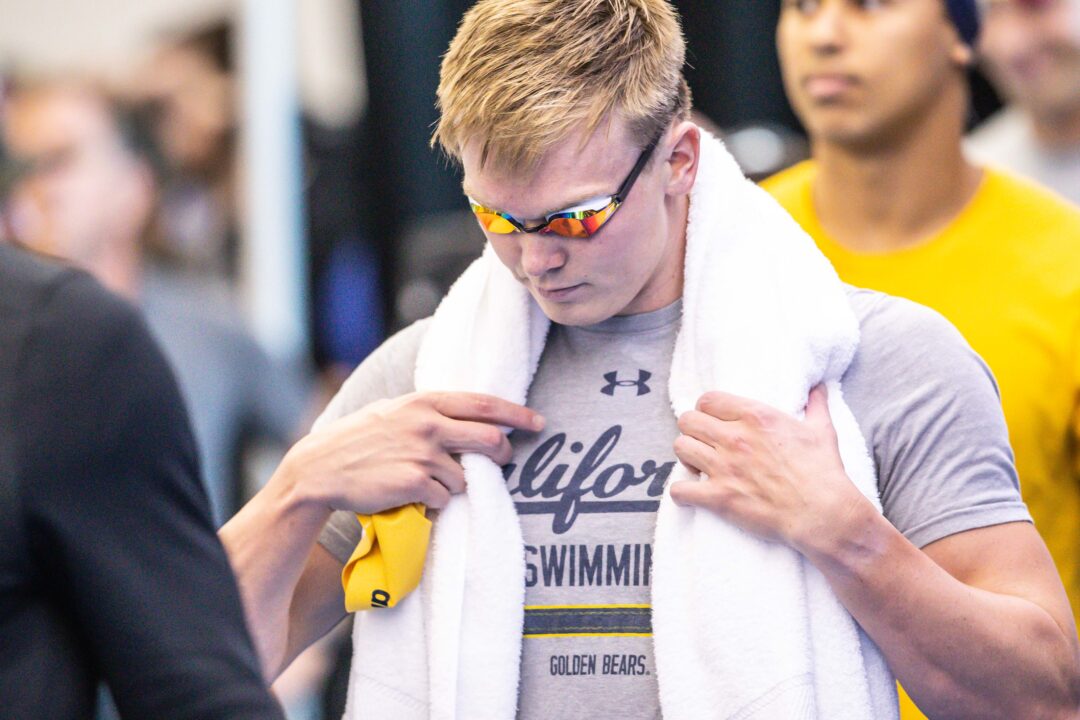 Julian, who just completed five seasons at Cal, will be joining his father Jeff Julian at Mission Viejo after graduation and World Championships in June. Archive photo via Jack Spitser/Spitser Photography

In a press release sent out on May 3, the Mission Viejo Nadadores swim club revealed that four athletes (Justin Ress, Trenton Julian, Taylor McCoy, and David Heron) would be joining the newly-formed Mission Viejo pro group in Mission Viejo, California under head coach Jeff Julian. Ress made the move from NC State to Mission Viejo last month, and qualified for the 2022 FINA World Championships in the 4×100 free relay and the 50 back at U.S. trials. He swam the 50 back in a time of 23.92, which is the third-fastest time in history.

However, the other three athletes included in the press release are newly-announced additions.

Mission Viejo announced in January 2022 that they would be hiring Jeff Julian to lead a brand new professional and post-grad training center at the club, which is titled the 360° Performance Center. Hence why it comes as no surprise that his son, Trenton Julian, will be training in this new pro group starting in June after college graduation and worlds. Julian just finished up a five-year career at Cal, where he most recently won an NCAA team title and finished third in the 200 fly. After NCAAs, he qualified for the 2022 FINA World Championship by finishing second in the men’s 200 fly with a time of 1:54.22 at U.S. trials, which is currently ranked third in the world. In addition, he also qualified to swim on the 4×200 freestyle relay by placing fourth in the 200 free.

Taylor McCoy is another new Mission Viejo addition that just completed five NCAA seasons. McCoy swam for Washington State University and had a career highlighted by 8th place finishes in the 400 IM at both the 2021 and 2022 Pac-12 Championships. Most recently, she won the 200-yard back title at the 2022 CSCAA National Invitational Championship in March 2022. After completing her master’s degree at Washington State, McCoy joined Mission Viejo to focus on the 2024 U.S. Olympic trials. Last year, she finished fourth in the 200 back at Wave I Olympic trials.

Open Water swimmer David Heron will also be joining the pro group. Heron is a native of the town of Mission Viejo, and competed for the club as an age grouper before swimming collegiately for the University of Tennessee from 2014 to 2018. Since his graduation, he has been representing Mission Viejo at national-level competitions. Heron won the 2021 U.S. National Title in the 10k Open Water race, and finished 6th in the 10k at 2022 Nationals to qualify on this year’s U.S. Open Water National Team. He previously competed at the 2015, 2017, and 2019 FINA World Championships in open water.

Hopefully, his dad will teach him to take maybe 5 more easy strokes going out on his 200 fly. When he finally puts together a well-paced 200 fly, it’s going to be terrific, because geez, to do the fly and die time after time you have to have guts (and a very short memory).

not much left in the cal pro group. Its always cyclical anyway. They had a great run.

This is not surprising although I’m sure a lot of thought went in to turning down the pro group at Cal. Hope it works out for him!

Well, your coach is your dad. That’s different.

Speaking of California, does the Stanford Cardinal swimming program even have a pro group anymore?

I’m pretty sure that Drabot is retired and has a job in the real world.

The emperor has no clothes.

Why do people downvote this stuff bruh

The downvotes are Texas fanatics