World Record Holder Cesar Cielo To Swim Until At Least 2018 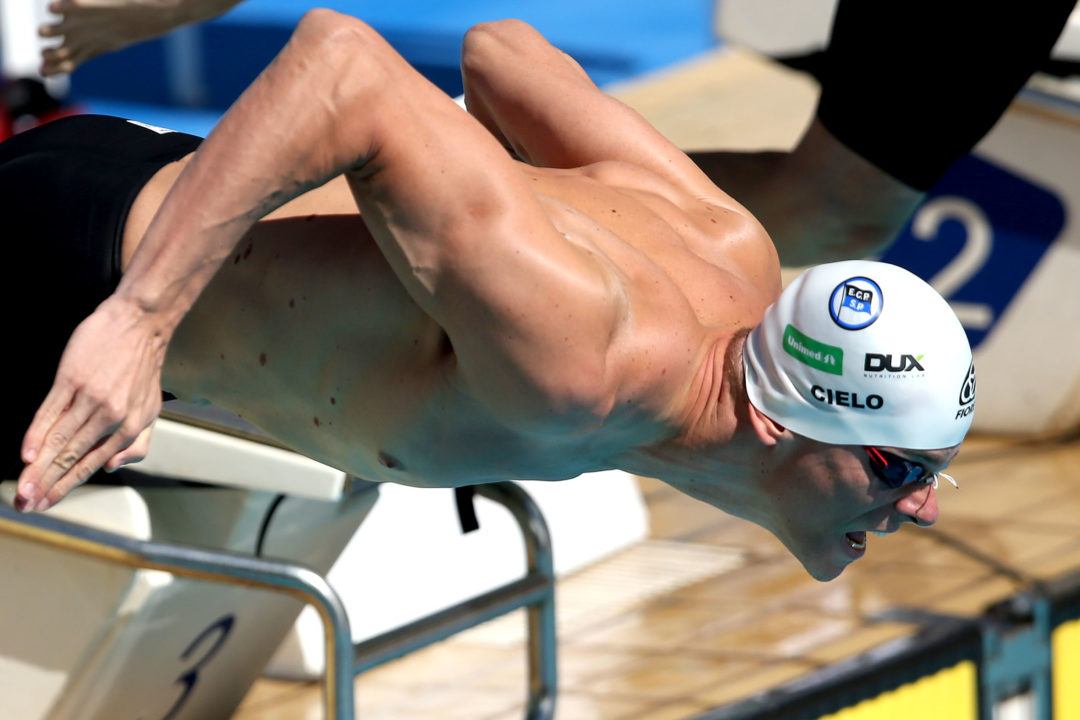 While he plans to continue his swimming career through next summer, he hasn't made any decisions on whether or not he'll swim through the Tokyo 2020 Olympic Games. Archive photo via Satiro Sodre/SS Press

Brazilian Olympic champ and World Record holder Cesar Cielo will continue to compete through at least 2018, the swimming star told Brazilian sports news outlet Globo Esporte. While he plans to continue swimming through next summer, he hasn’t made a decision on whether or not he’ll swim through the Tokyo 2020 Olympic Games.

Cielo is considered the most successful Brazilian swimmer in history, having won 3 Olympic medals. At the 2008 Olympics in Beijing, he became Brazil’s first ever Olympic swimming champion with his performance in the 50 free. He also won a bronze medal there in the 100 free. In 2012, Cielo once again landed on the 50 free podium with his swim at the London Olympics. He took bronze in the 50 free and finished 6th in the 100 free.

Though he missed out on making the 2016 Olympic team to swim in front of the Rio home crowd, Cielo made a comeback to qualify for the 2017 FINA World Championships in Budapest, Hungary. There, he was a part of the Brazilian 4×100 free relay squad that took silver and nearly upset the United States. He also finished 8th in the individual 50 free.

Seeing his Finkel, his start was much better than on Worlds, even going 21,9 he surfaced much ahead of Santos (Who has an amazing start on his own) much like his prime starts (Which were problably the best of the World at his prime), so I would not doubt to see a Cielo going 21,4 21,5 48 low again (47 mid on relays).

He must need the cash ?.

A model wife plus a kid do that to you…haha

Not much on the 2018 calendar is there- no Worlds or Olympics? Strange year to end your career in?

Probably an evaluation year. If he can produce good times at Pan Pacs, keep going. If not, call it a career