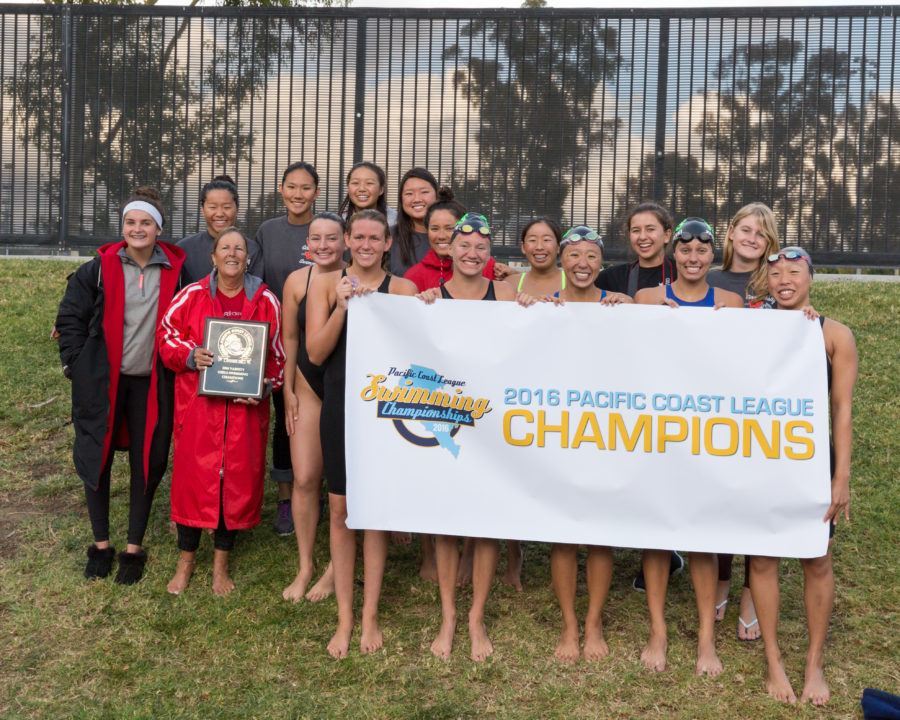 Woodbridge avenged their 38-point loss to Irvine from last year’s Pacific Coast League Championships with a 34-point victory this time around, due in large part to a sweep of all three relays.

The Pacific Coast League is one of the most competitive high school leagues in California’s Southern Section, and it swimmers had the crowd on their feet on Friday night at the championship final at Woollett Aquatics Center. After years of dominance from Irvine’s University High and Newport Beach’s Corona del Mar, it was Irvine’s Northwood High at the top of the 2016 boys’ leaderboard with a sweep of the Varsity, JV, and Open league titles. (You can read about the boys’ meet here.) The girls’ meet was just as exciting, with Woodbridge girls edging defending champions, Irvine, for the win.

The Warriors jumped out to an early lead with a 1:48.53 win in the 200 medley relay, holding off a fast-charging University who came in second with 1:48.80. Irvine took third in 1:50.30. Woodbridge junior Kate Krolikowski (recently featured in WWAGS) was one of the big contributors to the Woodbridge effort with two individual wins and big relay performances. Krolikowski won the 200 free and 500 free with dominant swims, touching in 1:46.89 and 4:48.60, respectively. The former was a lifetime-best by 1.3 seconds, while the latter was her first sub-5:00 (in the USA Swimming database, that is). Outside of high school, Krolikowski swims mostly fly and IM, which, if she made the qualifying times at other high school meets this year, she might in fact choose to swim at CIF-SS Championships next weekend. Krolikowski also led off Woodbridge’s 400 free relay with a new meet record of 50.44.

These girls in some events would have been American record holders when I swam in high school. The Irvine schools have a lot of kids that swim year round. I was in the much slower Garden Grove league as a high school swimmer in the 1970’s and I think I would have won the 100 yard breaststroke and 100 yard butterfly in the Garden Grove district today like I did in the 100 yard fly in 1975. We didn’t have 100’s for girls until 1974, except freestyle and IM..