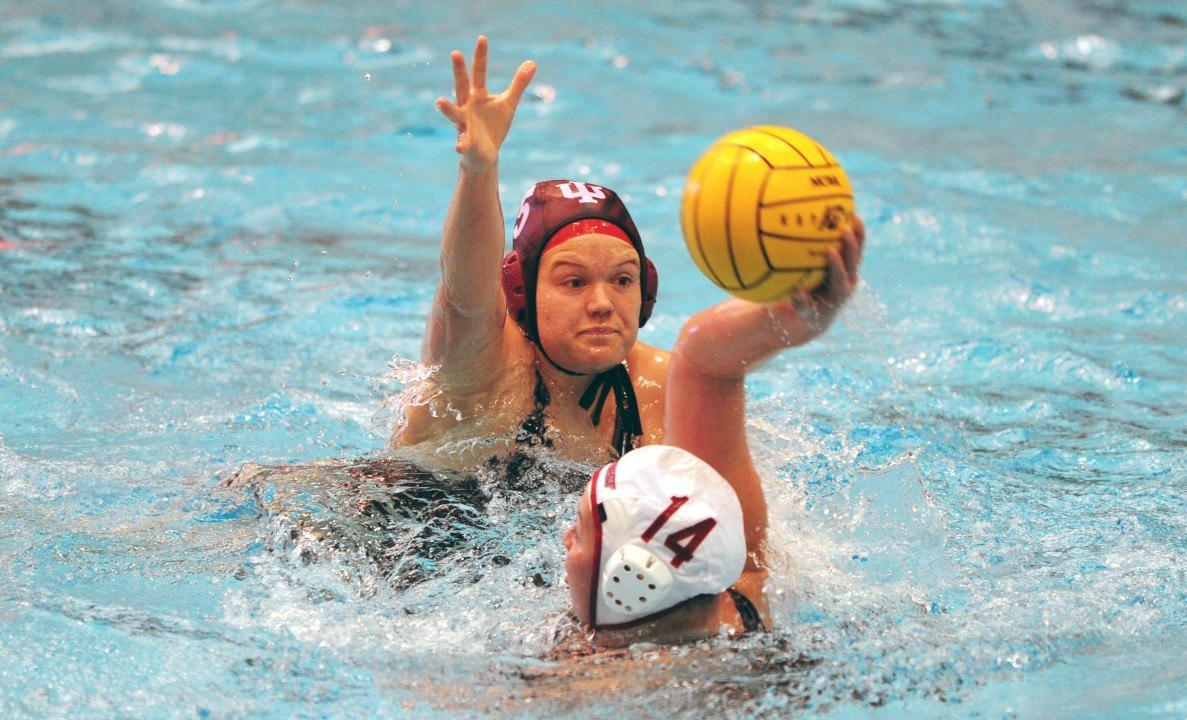 The following is a press release courtesy of Indiana University Women’s Water Polo:

Several Hoosiers led the way in scoring. Summer Creighton,Shelby Taylor, Kelly Matthews, and Rebecca Gerrity each scored two goals in Sunday’s upset win. Colleen McNaughtand Candyce Schroeder got on the board with one goal apiece.

Indiana keeper Mary Campbell was the defensive player of the game for the Hoosiers. Campbell recorded 10 saves in total, and delivered another clutch five-save performance in the fourth quarter.

Indiana knew it would be important to start the game their way if they wanted to beat the Aztecs in their home pool, so they showcased a high level of intensity and efficiency from the beginning. Their efforts paid off, as Indiana scored three unanswered goals from McNaught, Creighton, and Gerrity while playing tight defense in the first quarter. At the end of the first eight minutes, Indiana held a 3-0 lead over the Aztecs.

The Hoosiers were the first on the board in the second quarter as well. Indiana played airtight defense to start the quarter, and culminated with Matthews netting goal on the power play to bring the Hoosiers’ lead to four goals. San Diego State broke their scoring drought with two minutes to play in the half. Indiana took their next possession down the pool for their fifth goal of the half, another conversion by Matthews. The Aztecs took one final shot at the buzzer to try and cut into Indiana’s lead, but Campbell was there to make the save and keep the score line at 5-2 Indiana at half.

San Diego State came alive in the third quarter. The Aztecs started the second half with three unanswered goals to bring Indiana’s lead to only one. The Hoosiers recovered near the end of the third and found two more goals. The first, a shot from Taylor assisted by McNaught; the second, another goal from Taylor assisted by Gerrity. The Aztecs looked to chip into their deficit at the end of the third, but a steal from Creighton ended the period with Indiana leading 7-4.

The game came down to the wire, thanks to a wild six-goal final quarter. Indiana opened the scoring with two unanswered goals to bring their lead to 9-4. The first goal came from Gerrity on the Hoosiers’ first possession, and Taylor was credited with the assist. The second came when Matthews forced a steal, forced an ejection, and then found Schroeder who sent it rattling into the cage. The Aztecs followed with their fifth goal of the contest, but Indiana went down for a goal on their next possession. Creighton’s second goal of the game put Indiana in the lead 10-5 halfway through the final period. San Diego Stats managed to score two more goals, but four huge saves from Campbell prevented the Aztecs from erasing Indiana’s lead. A steal by Creighton on the last play of the game locked the final score at 10-7 in Indiana’s favor.

The Hoosiers (10-8, 1-0 CWPA) have one game remaining in the Aztec Invite, which will take place on Sunday, March 15. Indiana will take on No. 20 UC San Diego at 5:45 pm. Follow @IUWaterPolo on Twitter for live, up-to-date news on the action.