Winnington With Another Upset In Sydney, While McKeon Blazes Butterfly 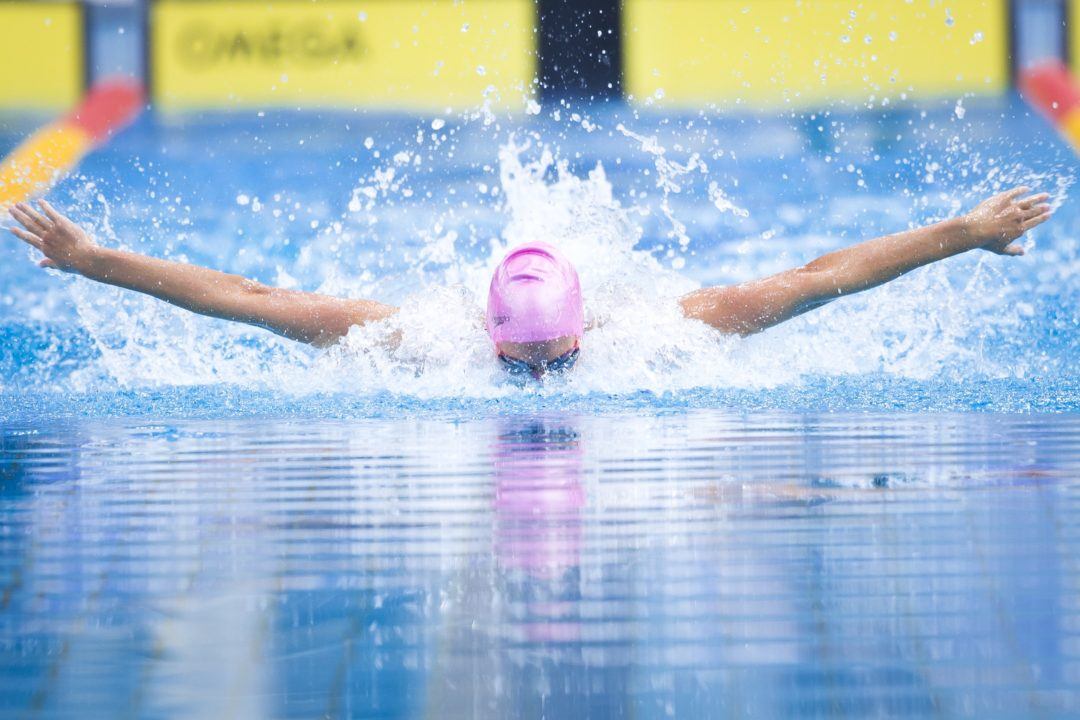 After an impressive win in the men's 400m freestyle on night 1, 17-year-old Elija Winngington broke out a 200m freestyle victory over seasoned competitors. Emma McKeon was also explosive, registering the 3rd fastest 100m fly in the world this season. Current photo via Hason Media

Night 1 in Sydney already saw 17-year-old Elijah Winnington pull an upset against titans Mack Horton and Gregorio Paltrinieri in the men’s 400m freestyle, and the youngster had another win up his sleeve during this evening’s finals. The Bond teen was able to beat out training partner Cameron McEvoy in the 200m freestyle, ultimately hitting the wall first in 1:48.59 for a time that falls within his own top 7 performances of his short career.

1:46.81 is what Winnington produced in Indy last year to claim bronze at the World Junior Championships, so the up-and-comer has proven he more to give at next month’s Commonwealth Trials to give prospective 200m free Trial competitors McEvoy, Chalmers, David McKeon, and others a run for their money.

“There’s an old saying ‘you stick to your own lane’ it doesn’t matter who’s next to you I just went out there and executed my race plan – I couldn’t care if Cam went out two seconds faster or two seconds slower he’s an amazing swimmer and an A class athlete and I can only strive to be what Cam is now,” said Winnington.

“I just stuck to my race plan and it worked out. I normally have a very good last 50, it was the same in the 400 last night. Richard [Scarce] and I have this thing ‘ability can only get you so far it’s the heart you have in the last 50m that gets you where you want to be on the wall.’

“Everyone is hurting equally in that last 10 metres so you’ve just got to give it as much as you’ve got.”

Having already collected bronze in the women’s 100m freestyle and silver in the 50m fly last night, Olympic medalist Emma McKeon wrangled up her first gold here in Sydney, taking the 100m butterfly in commanding fashion. The 23-year-old Griffith University swimmer split 27.05/30.54 to collect a super quick winning mark of 57.59, a time which beats her gold medal effort at this same meet last year by half a second.

McKeon’s outing also checks-in as the 3rd fastest time of the season, sitting only behind 2 Chinese athletes.

Following her 100m freestyle textile Australian record from yesterday, powerful sprinter Cate Campbell was up for the task again tonight in the splash and dash.  The 25-year-old Chandler swimmer scorched a winning time of 24.15, falling just .02 shy of the 24.13 she produced at last month’s Queensland Championships.

Not too far behind was sister Bronte Campbell, who finished in 24.71 to represent the only other swimmer to delve into sub-25 second territory.

The pair, along with teammate Shayna Jack, constitute the 3 Australians among the world’s top 5 in the women’s 50m freestyle this season.

Backstroking beast Kaylee McKeown, just 16, further established herself as a Commonwealth Games-worthy competitor, clocking 59.67 to easily take the women’s 100m backstroke. Tonight marks the first time the World Championships finalist has been under a minute, something her USC Spartans coach Chris Mooney has been on her case about.

“Chris has been saying I should be under the minute for a while now so he’s got to be happy with that,” the teen said post-race. “I’m now happy I’ve done that before heading into the Games Trials. I now have to go back and just work on my skills.”

I think the Aussie 4×200 relay will probably be better than most people are expecting…not just this year but over the next three years. After a period of underwhelming in this I think people tend to completely disregard them in this event the last few years. But Australia has enough depth and youth in swimming that shorter turnarounds are distinctly possible.

Hhmm, for the past 6-8 years the AUS M4X200 has often looked medal contenders at World level “on paper” but has never been able to pull it all together in the water. I DO fully agree that there are some good reasons for optimism that this MAY be about to change given the emergence of a group of younger names (Cartwright, Lewis, Winnington & Chalmers) who look to be 1.46 splitters at minimum. The issues is that 3/4 have very limited intl experience but also how many of these will make the selection cut and will this be diluted by the presence of those with ample intl experience but equivocal records in this relay (McEvoy, McKeon). Horton would probably be… Read more »

every time someone posts something positive about Australia, you respond with something negative or at best neutral

I’m merely a dispassionate observer of Australian swimming (and student of sporting history) who’s 40+ years of observation has taught due caution when it comes to predicting performance at the highest level. Even in peak periods, the “strike rate” of AUS leading contenders at Olympic level has been significantly lower than expected ….. those are hard cold facts. People are still viewing AUS swimming through the lenses of the 00s where AUS MAY have been worthy of the appelation of being No2 swimming power to the USA. However, that has only ever been valid for 2 periods of around 10-12 years apiece during the modern Olympic era ….. and the 2nd such period elapsed nearly a decade ago. Outside of… Read more »

I would say that during the current era from about the 1990s that Australia has cemented 2nd place behind the USA. No other country has as much depth as Australia outside the US, you can see that with our constant medals in the relays in both Men & Women. As per being in 2nd division, I agree, but in 1st division there has only been THE USA, no-one comes close, only the substance assisted East Germans 70s,80s & Chinese 90s were able to come anywhere near the dominance of the Americans. The Aussies despite falling badly short of expectation & totally getting smashed in RIO by the USA, they did attain 2nd place on the medals table.

Kaylee McKeown going to have a big year

Quite possibly so. She has been threatening to break the 1min barrier for the 100 so tonight’s swim was no surprise. The question is whether she can take this PB lower over the next month or so as she may need to do so to ensure selection. Whilst Seebohm looks a “lock” for one position, there are currently 6 other AUS women with sub 1min PBs vying for the other 2 places. In any case, it is likely that sub59 will be required to medal at CG. As for advances in the 200, this will be interesting. She made the great leap forward in this event last year whilst her 100 remained 1min+. Will it be the case that 2018… Read more »