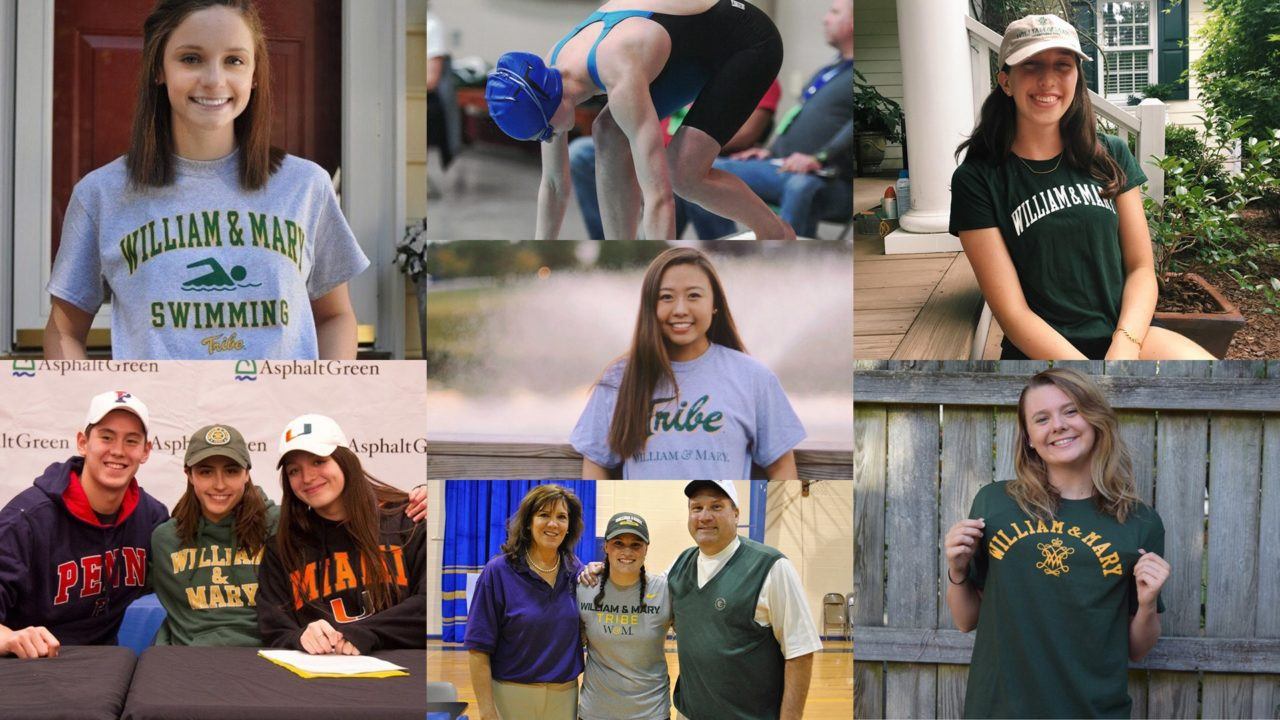 William & Mary Director of Swimming Matt Crispino '02 announced the addition of seven women to the Tribe roster today, who will join W&M ahead of the 2018-19 season. Current photo via William & Mary Athletics

William & Mary Director of Swimming Matt Crispino ’02 announced the addition of seven women to the Tribe roster today, who will join W&M ahead of the 2018-19 season. The class includes five from the state of Virginia as well as standouts from North Carolina and New York, and brings W&M’s roster to 29 for the upcoming season. Between them, the seven women in the Class of 2022 would have accounted for 18 finals swims at the CAA Championships last year, including six championship-finalists.

Prep: Scholastic All-American … Runner-up in the 100 back and third in the 50 free at the 2017 Virginia 5A State Championships … Qualified for Winter Junior Nationals in both backstrokes in 2016 and 2017 … Member of the Spanish Honor Society … Member of the Key Club.

Personal: Daughter of Heather and Jeffrey Cundiff … Enjoys listening to and writing music, and playing the piano … Plans to major in accounting.

Prep: Named All-State as a junior after setting the N.C. Independent School’s state record in the 100 back … Named to the News & Observer All-Met team each of her last three years … All-conference the last three years as well … Named to the NCS Select Camp in both backstroke events in both 2014 and 2015 … Invited to the NASA Junior Nationals in both 2015 and 2017 … Member of the National Honor Society … President of the American Sign Language Club.

Prep: National Catholic School’s meet record-holder in the 100 back … Won national titles in 2014, 2017, and 2018 … Virginia Independent School’s all-state in the 100 back each of the last two years, finished third in both 2017 and 2018 … Finished fourth in the state championships 50 free as a junior and the 100 free as a senior … Prep All-American consideration in the 100 back in 2018 … Named the Swimmer of the Championships at her conference meet as a senior … ISCA Junior National Qualifier in five events … Also played on the varsity basketball team, taking second in the state in 2017 … Member of the National Honor Society … VP of the student government … Dancer at the Boyle School of Irish Dance.

Prep: Four-event finalist at the ISCA Junior Nationals … Finished seventh in the 100 free, 16th in the 200 free, and 21st in both the 50 free and the 50 fly … Took fifth at the New York City Senior Metropolitan Championships in the 200 free … Also helped her team to a fourth-place finish in the 800 free relay … Honor Roll student every semester … Member of the National Honor Society … Member of the Museum Club … Writer for the student paper.

Prep: Consolation finalist in the Virginia 5A state championships in the 100 fly as a senior, taking 13th … Won the district title and finished second in the region in that event … Fifth in the 200 IM at the regional meet as well … Qualified for the NCSA Junior Nationals each of the last three years … Named second-team All-Met by the Richmond Times-Dispatch as a junior … Finalist in the 200 fly at the Virginia Short Course Senior Champs each of the past two years … Member of the National Honor Society … Also a member of the English and Science National Honor Societies … Member of the BETA Club … Represented her class on the student government all four years … Member of the Spanish Club.

Personal: Daughter of Susan and Bryan Rogers … Father graduated from W&M in 1977 … Plans to major in kinesiology.

I’d love to see them get ath. scholarships

Their previous two classes boast multiple men over this height. They also have a 6’7″ giant

Can’t believe the staff roster hasn’t changed yet, was sure Matt or Chris would hve moved on to bigger schools by now.

Shoosh, you. We like them right where they are!!!