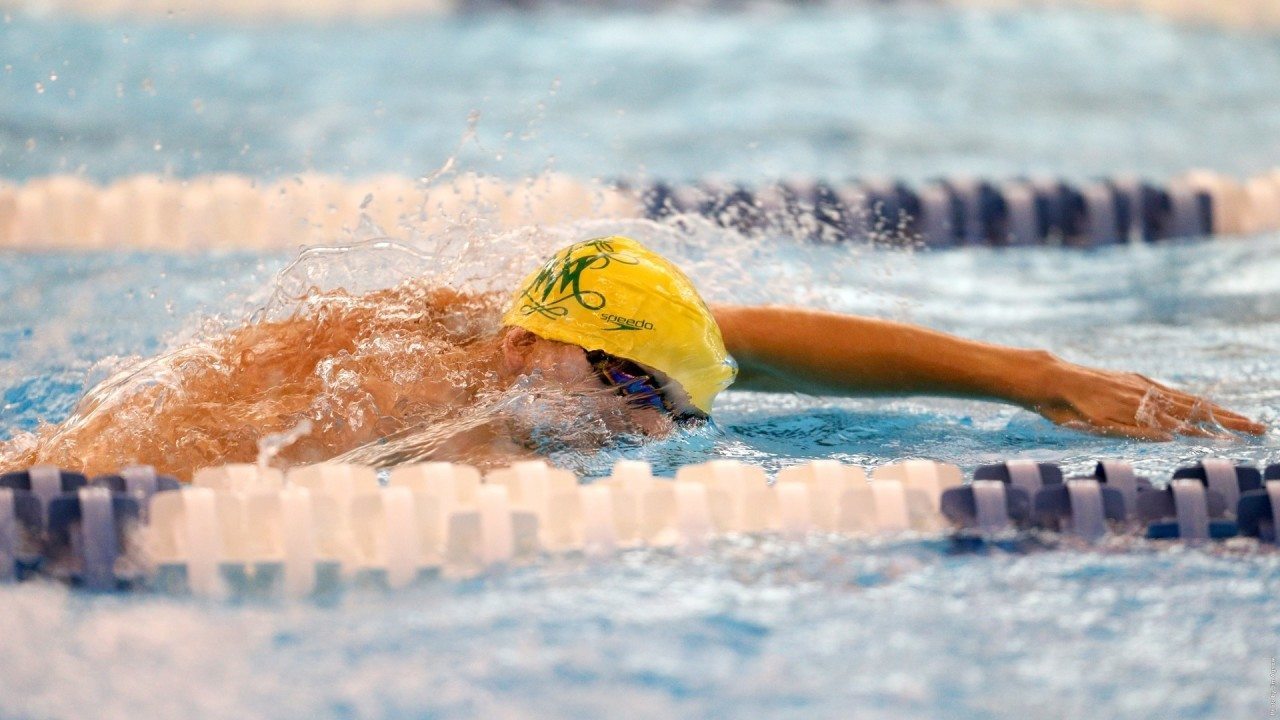 The William & Mary men and women swept the CAA championships for the second year in a row this week in Christiansburg, VA. Archive photo via William & Mary athletics

With 3m diving being technically event #1, the James Madison Dukes led this meet from the opening event until almost halfway through the final session.  It wasn’t until event 35, the 200 breast, that the William & Mary Tribe finally took control of the meet and opened up a 16 point lead on the Dukes.  They continued to build lead their lead, finally guaranteeing a victory with junior Abby Mack’s victory in the 200 fly.  A three second victory in the 400 free relay was the proverbial cherry on top for the Tribe, as they won their 2nd straight CAA championship.

Individually, the Tribe were led by senior Jaimie Miller.  She closed out her college career with a freestyle sweep, winning the 50, 100, and 200 freestyle events.  She also anchored W&M’s 1st place 200 and 400 free relays, while also swimming on the 800 free and 400 medley relays, which finished 2nd and 3rd.

While JMU earned a 2nd place finish, Drexel was the only school to take take meet records.  The Dragons got things started with a conference record in the 200 medley the very first night of the meet.  Freshman Alexa Kutch swept the backstroke records on Friday and Saturday after taking the 100 back in 53.25 and the 200 back in 1:55.12.

This was W&M’s second straight, and third overall CAA championship, having also won in 2007.

The William & Mary men also had to overcome a diving deficit, as the school does not compete in diving.  However, they opted not to make things as dramatic as the women did and took the lead on the first full night after sweeping the top four spots in the 50 free.

W&M won four of the five relays, only dropping the 400 medley relay to Drexel.  Individually, they had a very balanced attack as five different men scored at least 50 points for the Tribe.

Freshman Colin Wright and sophomore Carter Kale scored 53 points each.  Wright knocked half a second off the school record with a 19.62 in the prelims of the 50 free.  That time will put him on the cusp of a NCAA invite, which would be the first for a William & Mary male swimmer in a very long time, if not ever.  Wright won the 50 and 100 freestyles, earned 6th in the 100 fly, and helped W&M to victory in the 200 medley, 200 free, and 400 free relays.

Kale swept the distance events, set a school record in the 1650, and also picked up a 6th place finish in the 200 fly.

Towson sophomore Jack Saunderson set two new conference meet records, winning the 100 fly in 47.01 and the 200 fly in 1:43.44.  That latter time is also right on the bubble for what it should take to earn a NCAA invite this year.

After the aforementioned 1-4 sweep of the 50 free, it was no surprise to see W&M eclipse the conference record in the 200 free relay, taking that event in 1:19.03.

This win was the Tribe men’s third in a row under Coach Matt Crispino.