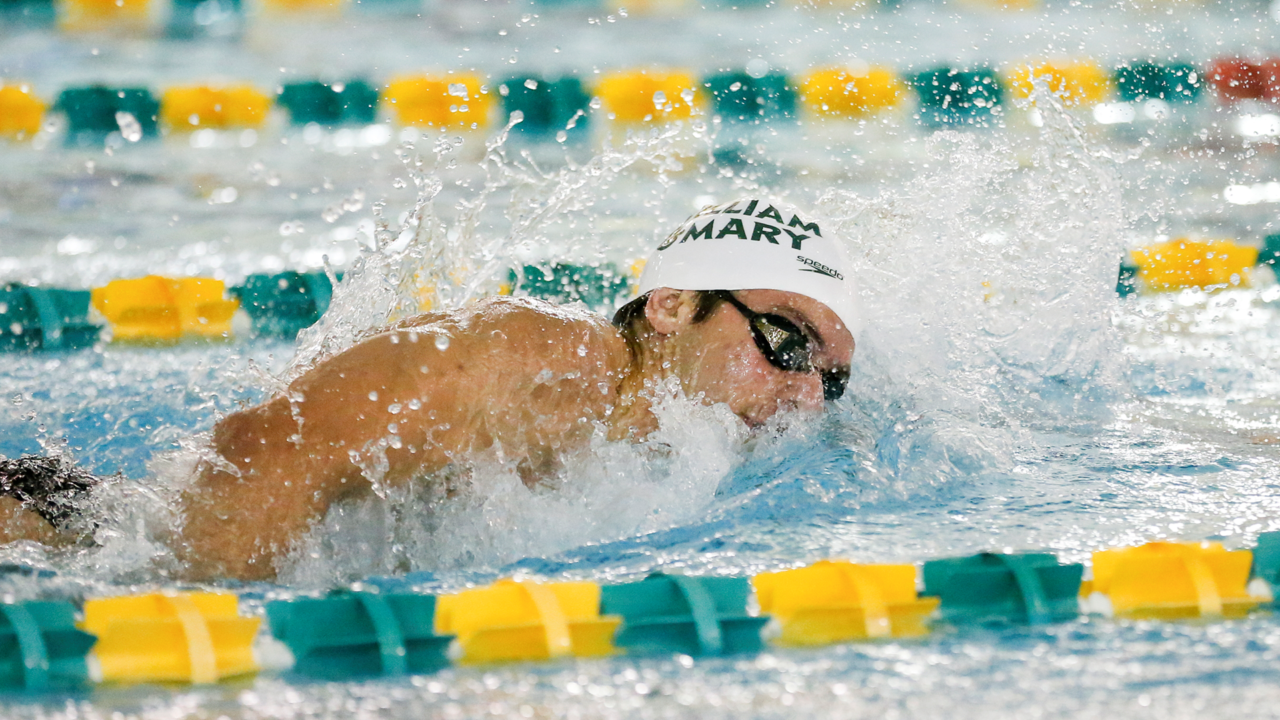 The Johns Hopkins women won the final three events of the meet to come from behind to beat host William & Mary, 135-127, while the Tribe men won 152-110. Current photo via William & Mary Athletics

The William & Mary men’s swimming team opened the 2019-20 season in record-breaking fashion on Saturday, shattering nine pool- and dual-meet records in a 152-110 win over Johns Hopkins.  The Tribe starts the year at 1-0, while the Blue Jays fall to 0-1 overall.

How it Happened
– The record parade got started in the very first event, as W&M won the 200 medley relay for the first of 10 wins on the day.  Senior Colin Demers (Virginia Beach, Va.) led-off the team before giving way to Devin McNulty (Herndon, Va.) and Jack Doherty (Middletown, Conn.), and senior Colin Wright (Williamsburg, Va.) brought the team home in 1:29.21, more than three-quarters of a second faster than the same team went in January of 2018 (1:30.08).  That performance was the eighth-fastest race in school history, and broke both the pool and dual-meet records in the event.
– Next was the 200 free, where Wright swam 1:40.47 for the win, and broke the pool record of 1:40.61 set by Billy Russell ’16 in his senior season.  That was also the first of two individual wins on the day for Wright.
– Demers earned an individual win of his own in the 100 back, timing 50.36 seconds.  He is the reigning conference champion in that event.
– Senior Chris Balbo (Short Hills, N.J.) matched his classmate Wright with two individual wins, the first coming in the 200 fly where he swam 1:51.49.
– Another senior, Ian Thompson (Alexandria, Va.) was the next man on top of the podium, touching the wall in 20.91 seconds to win the 50 free.
– After the first intermission, Wright put on another show in winning the 100 free, swimming 44.36.  While that was shy of his own pool and dual-meet marks of 44.28, it was the 16th-fastest race ever at W&M.  With his second win, Wright moved past Mike Lovett ’00 and into seventh-place on the all-time wins list with 54.
– Johns Hopkins picked up wins the 200 back and the 200 breast, but Balbo put the Tribe back on top in the 500 free, pulling away from the field over the back-half of the race to win in 4:38.62.  That was Balbo’s 50th career win, making him just the seventh man in the last 30 years to reach that mark.
– Next was the 100 fly, where Doherty made it look easy with a 49.13 win.  That was nearly a full four-tenths under the previous dual-meet record, set by Justin Barden ’16 in his final dual meet (49.62).
– Doctoral candidate Ben Skopic (Marriottsville, Md.) added another dual-meet record in the 200 IM, stopping the clock in 1:51.15.  That was 0.61 under the record previously held by Will Manion ’16 since 2015.
– The meet was already decided by the start of the final race, the 200 free relay, but the Tribe made sure it was one of the most exciting races of the day.  Wright started things off with an astonishing 19.95 lead-off split, shattering his own pool and dual-meet records set in the final meet of the regular season last year (20.17).  That was also an NCAA provisional-qualifying mark, and though the season is still young, it ranks Wright third in the country in the 50 free.  Next was Thompson and Doherty, who split 20.09 and 20.17 respectively, before sophomore Graham Hertweck (Greensboro, N.C.) brought the team home in an easy 20.78.  Combined, the team swam 1:20.99, obliterating the pool record of 1:23.23 set by W&M back in 2013, and the dual-meet record of 1:22.12 set last fall against Navy.  That was the ninth-fastest race in school history, and currently ranks No. 2 in the NCAA this season.

Up Next
William & Mary hits the road for the first time next weekend, taking on long-time rival East Carolina on Saturday, Oct. 12, at 1 p.m.

How it Happened
– W&M started the meet with a strong showing to win in the 200 medley relay.  Sophomore Anna Kenna (Chantilly, Va.) started the team off on the backstroke leg, before senior Lauren Freeman (Fairfax Station, Va.) handled the breaststroke and freshman Brooke Lamoureux (Virginia Beach, Va.) the butterfly.  Heading into the final exchange, the Tribe was in second, more than half-a-second behind, but Olympic Trials-qualifier Missy Cundiff (Leesburg, Va.) blew through the water in a 22.86 split and won the touch at the wall in 1:45.96, 0.04 ahead.
– W&M kept the winning streak going over the next two events, starting with senior Norah Hunt (Stuarts Draft, Va.) in the 1,000 free.  Hunt led wire-to-wire, and stopped the clock in 10:31.45 for the win.
– Junior Megan Bull (Hillsborough, N.J.) equally unrelenting in the 200 free, winning the event in 1:51.99 for the first of two wins on the day.
– In the 100 breast, freshman Annie Tuttle (Alexandria, Va.) won her first collegiate race, timing 1:05.85 for the win.  She was just a second off the dual-meet record in the event, despite the team being in heavy training early in the season.
– Cundiff was back in the water in the 50 free, the event she’s the freshman record-holder in, and nearly added two more records with her winning time of 23.28.  That’s less than two-tenths of both the pool and dual-meet records.
– After Hopkins won the next three events and took its first lead in the meet, Bull and Hunt were back in the water for the 500 free and finished 1-2 for the Tribe.  Bull’s winning time was 5:05.57.
– Despite tight finishes in the final three races, including the 200 free relay where Cundiff posted another sub-24 performance in the 50 free, Hopkins was able to win each event and take the meet.  One of the longest-standing pool records also went by the wayside, with Blue Jays senior All-American Michelle Wang timing 2:05.32 in the 200 IM to break the mark that had stood since 2002.  Wang’s time was also an NCAA Division III provisional qualifier.

The Johns Hopkins women’s swim team won the final three events of the meet to come from behind to beat host William & Mary, 135-127, Saturday afternoon. In all, the Blue Jays won eight of the 14 events.

Top Finishers
• Hopkins opened the day with second and fourth-place finishes in the 200 Medley Relay. Sophomore Sydney Okubo, senior Sonia Li, sophomore Rebecca Ssengonzi and senior Kiki Petersen swam a 1:46.00 to finish in second by just four-hundredths of a second. Freshmen Renee Liu and Cali Wilson, senior Michelle Wang and junior Mikayla Bisignani placed fourth with a time of 1:50.06
• Junior Emma McElrath followed with a second-place finish and a time of 10:34.68 in the 1000 Free. Wang then took second in the 200 Free as she touched in 1:53.62.
• The Blue Jays then swept the top three spots in the 100 Back. Okubo led the way with a winning time of 58.01. Freshman Cecilia Cortez took second (58.73) and Liu followed closely in third (58.98). Lin took third place in the 100 Breast as she clocked in at 1:07.74, while Wilson took fifth in 1:10.80.
• For the second time in three events, Hopkins grabbed first through third in the 200 Fly. Ssengonzi paced the field with a 2:06.77. Sophomore Elaine Lipkin touched in 2:07.83 for second and freshman Emerson Davis took third in 2:08.04.
• The 50 Free saw Petersen and sophomore Kristen Alicea-Jorgensen go two-three. Peterson finished in 23.86, with Alicea-Jorgensen following in 24.20. Petersen then beat the field in the 100 Free, touching in 52.52 to win by three-quarters of a second. Alicea-Jorgensen placed fourth in 54.04.
• Okubo finished first in the 200 Back, clocking in a 2:03.63, with Liu following in second in 2:05.30. Freshman Chase Lahr took fourth place with a time of 2:07.84. That pulled the Blue Jays within one point of the Tribe with five events to go.
• Hopkins then grabbed a six-point lead over William & Mary with first and second-place finishes in the 200 Breast. Lin led the way with a winning time of 2:24.71. Freshman Kate Overbey placed second in 2:25.25.
• The Tribe bounced back to take the lead after the 500 Free by taking the top two spots. McElrath finished in third place with a time of 5:10.33, followed closely by Lipkin in 5:10.64.
• Ssengonzi earned her second win of the day by beating the field in the 100 Fly in 57.33. She beat W&M’s Madeline High by more than a second and a half to kick start JHU’s rally.
• Wang then took first in the 200 IM in 2:05.32 – winning by 2.68 seconds. She also broke a 17-year-old pool record and her time was an NCAA B time. Okubo finished in third place with a time of 2:09.25. That swung the lead in Hopkins’ favor as the Jays led 124-121.
• Hopkins secured the win with a first-place finish in the 200 Free Relay. Lin, Petersen, Bisignani and Alicea-Jorgensen combined for a 1:36.16.

What it Means
• This is Hopkins’ first-ever win over William & Mary as the Tribe had won the previous nine meetings.

The Johns Hopkins men’s swimming team won four events in as the Blue Jays opened the dual-meet portion of their schedule at William & Mary Saturday.

Up Next
• Hopkins is back in action on Friday, October 18 as the Blue Jays travel to Annapolis, MD to take on Navy, Towson and George Washington. The quad meet is set for a 4:00 pm start.

Great start for both teams really

What a way to start the season, Go Tribe!!