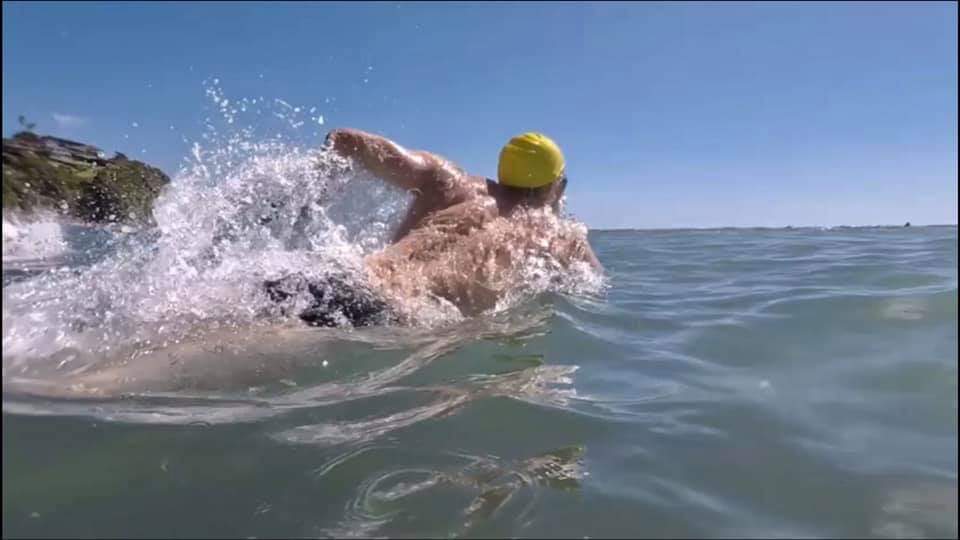 Very often on pool decks around the world you hear the phrase SWIM DOWNHILL. While I think this is to denote ease, quite the opposite is true. Current photo via Paul Ellercamp / oceanswims.com

In 1936, Popular Science Monthly described Ralph Flanagan’s secret to swimming success as lying low in the water with his head and shoulders level with the surface. But that is the opposite of what Sakamoto saw.

“Flanagan kept his shoulders and head high in the water, almost as high as Johnny Weissmuller used to do. Flanagan looked like a hydroplane, his upper body rising like the hull of a boat and then moving faster and higher and gaining momentum until his body skimmed over the obstacles of the waves he himself created as he moved and over the bow wave in front of him, seemingly without effort. In fact, Flanagan was so high in the water, it appeared as though he might take off in the air, although he never did.” Excerpt from The Three Year Swim Club, by Julie Checkoway

Very often on pool decks around the world you hear the phrase SWIM DOWNHILL. While I think this is to denote ease, quite the opposite is true. I had always wondered where this catch phrase originated. At my job in the swim flume at the University of Colorado Sports Medicine and Human Performance Laboratory, a client came in and asked me to teach him Navy Seal Swimming (Sea, Air, Land). I replied that I did not know how, to which he instructed me to watch the following video. At 2 minutes and 38 seconds into this video, I got my answer on swimming downhill. This is where the phrase, the teaching, the misnomer, had been coming from. The man continues to say that if you lift your chest, your legs sink. The last I checked my legs were connected to my core so if I wanted to lift them I could engage my core. Navy Seals are in the water a long time, they are trying not to be seen, and not to get shot.

In open water, we want to SEE and be SEEN; we want to swim fast, easily (at least I do). We want to sight. We want to be aware of our surroundings. Water is much denser than air.  You can swim low but it  is harder. Eight hundred times harder in fact. In open water I want the following:

Dryland exercises to get more out of you core that would allow lift:

At the World Cup 10k swim in Rosario, Argentina, last February where this next video was taken, check out the swimmers’ body positions. Video courtesy of German Vache.

There is so much we can learn from the Navy Seals. Their training is probably the toughest in the world. We can admire their stamina, their leadership skills and their ability to work as a team; but swimming downhill is not one of them.

How does this apply in a pool? Can maybe see this being advantageous in a relay when the waves are pretty wild

terrible advice for the pool. Not sure why navy seals are relevant. Any decent pool swimmer could crush a seal.

I’ve known two people from my club swimming days that have gone on to be navy seals. Both were D1 swimmers. Obviously pretty fast, but only competitive at the conference level. I would naturally guess they’re towards the upper bound of seal swimmers.

Although I agree with what the author is attempting to state he is overlooking the fact that Flanagan had
tremendous what I will call “floatability” or you might term buoyancy. That becomes the reason Flanagan
swam on top of the water. (I have had swimmers that had that trait).

Kiphuth (pg 140 book) He emphasized the importance of buoyancy and flexibility in swimming:
To quote:
” I mean flexibility of ankles, knees, arms and shoulder girdle.” On of Kiphuth’s most astute observations involved an analysis of Japan’s Flying Fish (in part pg 141 book)”but like many great competitors he establishes his own style, which is based finally on his superb condition and balance and power in… Read more »

This is not pool swimming advice. Eney is saying that downhill swimming (hips high in a horizontal line) is not advantageous in Open Water Swimming. An open water swimmer frequently sights and thus lowers hips with each peak forward. A strong core and shoulders/neck will minimize dropping hips and legs. The only pool advantage, I can see, would be the out of season high school football linebacker sighting for the wall at the local summer league champs.

I swam both the Bridgeport Harbor 2 mile swim (set the record) 39min 30 and the New Haven
Harbor 3 mile swim one hour 18 – won both 2 years in a row.
I did not lift my head and peak forward. Those were different days.