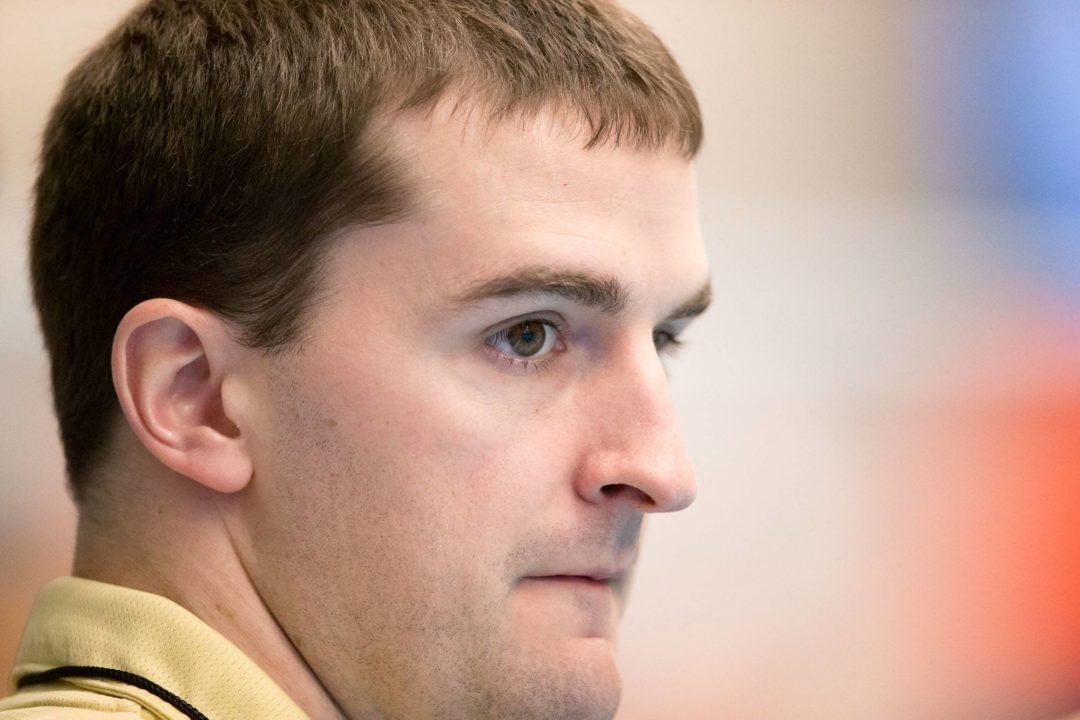 There is a generation of teenage stars, particularly male, in American swimming right now of the likes we have never seen before. (Photo of Chris DeSantis, author, Credit: Tim Binning, TheSwimPictures)

The biggest story of an otherwise toned down World Championship Trials meet is obvious. There is a generation of teenage stars, particularly male,  in American swimming right now of the likes we have never seen before. With the retirement of Michael Phelps, Ryan Lochte stands alone as the last prominent member of the previous best generation in American swimming. While there are some good to great American swimmers right now in their 20s, they don’t match up with the star power that Phelps, Peirsol, Hansen and Crocker et al brought with them at the turn of the century. No, that will fall to this next group. Which of course, begs the question: why? Why all of a sudden are there so many future potential stars in the age group ranks?
One reason I haven’t heard discussed is the impact that the great demographic change in the American national team we’ve seen over the last four olympic cycles. As the ages of swimmers at the top has pushed up and up, the club level has become more and more of a developmental rung in the ladder. This was very disruptive, particularly for coaches who had spent their careers trying to work to the top of the ladder and build their clubs, only to find that college swimming and ultimately post-graduate centers were becoming the new top of the ladder. Clubs also had to adjust their development systems for swimmers that had longer careers. No longer was it was important for a swimmer to max out their potential for an Olympic spot in their teenage years.
This has led to a dramatic increase in swimmers progressing well from age group to age group. The prevailing wisdom used to being a top age group swimmer actually meant you were going to crash and burn later on. That is no longer true. Jack Conger and Ryan Murphy are good examples of this. So is Justin Lynch, who just yesterday took down a Phelps NAG record, two years after putting up a 54 second 100 butterfly at age 14. Missy Franklin is a great example of an age group phenom who went all the way to becoming the best swimmer in the world and continues apace.
One critical factor that pushes these results along is the now very easy ability for swimmers and coaches to compare their results nationally. No one gets to live in a bubble, dominating local age group competition. Everyone knows where the bar is being set and works to reset it. Perhaps no coach has embodied all of this more than Sergio Lopez, who had single-handedly completely rebooted what it means to be a “Club Coach” in America.
Sergio’s teams have performed so well over the last few years that it’s probably time we all consign ourselves to the fact that we shouldn’t even say “maybe” before we say “the best swimming coach in America”. One of the biggest common mistakes people make in evaluating coaches is to only look at their best result and judge them on that. This ignores that there is a lot of volatility and chance involved in one top swimmer. It is far more important to keep digging to see what’s beneath. Sergio Lopez (and the coaches around him at Bolles) are having great results with a lot of swimmers. That’s what truly matters.
It’s comforting to know that so much is changing for the better at the club level. The spectre of centralized post-graduate centers has done much to help that over the last year. With college swimming in as precarious a position as it has ever been, I have a feeling that swimming will need the clubs more than ever in the future.

The answer is the Jammer. The first generation of kids who wore jammers is now growing up and getting fast. In the past, speedos were worn by age groupers and once you got to a certain age you quit swimming cuz boys are self conscious in speedos. Along comes the practice jammer in the 2000s and boom boys stayed with the sport. Thats my hypothesis at least.

I would think that kids nowadays are Much Taller Stronger and hit their growth sput much earlier.. we will have to wait these kids at 20 21 years old to really check it out

I definitely think you have something there, especially for retaining boys in that critical 12-14 period!

Vote Up0-1Vote Down Reply
Lane For

Speedos and being “self-conscious” had nothing to do with it. That was the suit worn back then and no one gave it a thought. Maybe today’s generation feel it was a little too small, but there lies the generational differences.

interesting theory. my 10th grade history teacher talked about swimming as the meeting of the infinite and the infinitesimal

however i notice from personal experience once someone gets to the age of 14, 90% of swimmers wear speedos (often with dragsuits, which i guess is some extra “coverage”)

Speedo would like to know where you would like your royalty check sent? They love when we in the swimming community refer to a brief suit as a speedo;) oh by the way Kleenex just called and wants to know if they can sponsor you? Seriously, good points about ways to overcome being exposed at an awkward time for boys. More likely all of the above (or below ) comments that lead to improvement.

The answer is the Jammer. The first generation of kids who wore jammers is now growing up and getting fast. In the past, speedos were worn by age groupers and once you got to a certain age you quit swimming cuz boys are self conscious in speedos. Along comes the practice jammer in the 2000s and boom boys stayed with the sport. Thats my hypothesis at least.

Jammers have nothing to do with it, there were more male to female swimmers in the 1970’s, because their were a lot more college programs for males. Probably, having kids do underwaters helped younger males become faster but with males aged helps more than with females.

There has always been more girls in swimming since ancient times only at the college level until late 70’s at that level did that change. The ratio of boys to girls has only gotten slightly closer in more recent times.

ok so i agree that sergio is great, but this ignores the fact that a lot of his swimmers come into his program after already proving themselves. On the other hand, NCAP has proved itself to be the premier age group club in the country during this meet. Cassidy bayer, andrew seliskar, janet hu, and katie ledecky come to mind immediately, not to mention swimmers like matt mclean who come from the program. i may be overlooking some other teams, but this seems absolutely ridiculous to me, and very impressive

NCAP is a great club team, but don’t they have a bunch of teams all across the DC area? I don’t have the numbers, but I’d be willing to bet that their overall numbers are astronomically higher than Bolles. Bolles is just 1 team in one location, so there is a big difference between the two.

oh for sure, and im not really trying to compare the two, i think they have five sites in the dc area with senior caliber training groups. But the coaches all work together, and from a developmental standpoint, they obviously have got something figured out. so thats one thing, and the other is that those swimmers have all been developed from a young age on that team, can bolles say the say thing?

they really are two completely different programs with different strengths, and both deserve recognition, but all im saying is that NCAP, in my mind, have proved themselves to be the best age group developmental team in the country right now

They have about 10 sites located across the DC metro region, and each one has a senior level training group. Each site operates as a separate club of sorts, and they all have a different head coach. Top level sites include the Tysons location, home to Andrew Seliskar, Megan Byrnes, and Janet Hu (head coach John Flanagan), the Alexandria site, home to Cassidy Bayer (head coach Jeff King), and the GP site, home to Katie Ledecky, Andrew Gemmell, Carsten Vissering (Bruce Gemmell).

ok i know they have a lot of sites, but which ones are the senior group ones? im aware of tysons, american, prep, burke, and alexandria

Sergio himself came from NCAP (Curl-Burke, at the time).

Bolles has less than 300 kids with one long course pool, one short course pool in one location.