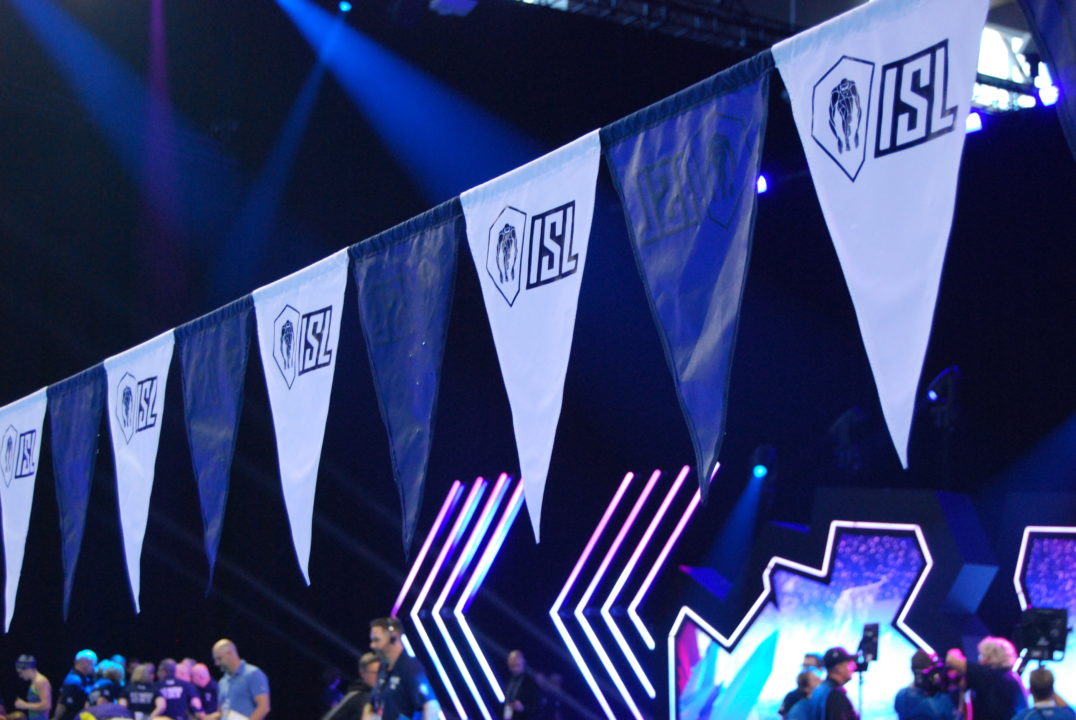 The ISL could stand to pick up a few cues from the rebooted XFL, which picked up significant traction throughout its opening weekend. Stock photo via Janna Schulze/SwimSwam.com

I hadn’t planned to care about the XFL, but it quickly became clear I wasn’t going to be able to look away.

Moment after moment went viral as the first weekend’s games unfolded. Whether it was about the unique plays made possible by the league’s new rules or the timely interviews occurring on-field after them, fans had a lot to say – mostly positive – about the revived league.

As with many things in life, it wasn’t hard to see a swimming connection: the XFL resembles the International Swimming League in more ways than one. And the ISL could pick up a few tips from it, too.

There’s a clear comparison to be drawn between the leagues: the XFL serves as an offseason alternative to the behemoth NFL and is aimed at improving the fan experience. It’s funded by billionaire former wrestling promoter Vince McMahon and features eight teams, playing by alternative rules which are meant to increase excitement and speed up the game.

The obvious distinction between the ISL and XFL’s premises is that many top swimmers are in the ISL, while the best football players in the world play in the NFL (at least for now). So, the ISL would likely not want to be to FINA what the XFL is to football. But hear us out on a couple of tips.

The ISL innovated the swimming broadcast this season – that is indisputable. Yes, they didn’t display times in the way some fans might have wanted, but the graphics were next-level. Further, it introduced the concept of mid-meet (or mid-race) on-deck access to coaches and swimmers.

Personally, I thought the most interesting interaction was when mic’d-up coaches told the lineup runner why they were making changes during a break. Not every coach had real insight to give, but when they did, it was an inside look like we’ve never gotten before.

The ISL was also on to something when it interviewed relay swimmers mid-race. Inconvenient for the swimmer? Yes. But, potential for compelling television? Yes. What it lacked was hard-hitting questions – and that’s where the XFL comes in.

One of the biggest moments of the weekend was when sideline reporter Diana Russini asked kicker Ty Rausa what went wrong immediately after he missed a field goal.

Check it out below:

You miss a kick in the XFL? you're going to have to answer to it immediately on the sidelines by a reporter [in this case @diannaESPN]pic.twitter.com/SuSVUcMicx

Imagine if the ISL could take their on-deck interviews beyond the surface-level jargon we so often get from race winners. A favorite gets upset? Let’s hear from the favorite. Likewise, we might see analysis from a non-contender who had a big swim regardless of where they finished in the field.

XFL players also are just all-around mic’d up, leading to insight into interactions like the one below, too.

Having this kind of authentic moment access will ultimately be what the XFL wants to focus on over generic sideline interview sound bites. #XFL2020 pic.twitter.com/mAJffvRQ8I

How fun would it be to listen in on the candid conversations between swimmers and coaches?

Every XFL game is broadcast nationally (the first four drew 12.47 million viewers), and the opening weekend broadcasts featured live gambling odds to various degrees. In creating the league’s new rules, the XFL reportedly consulted with Las Vegas sportsbook operators to see what would be conducive to gambling.

“We are embracing the spread from the start,” XFL president and COO Jeffrey Pollack said. “This is a core business strategy for the XFL. We understand that for a lot of our fans, betting on the games has become as essential to the game experience as the helmet, ball and jerseys. That’s what we’re gearing up to provide. Our mission and our infrastructure are geared to the sports-betting future that is coming fast. There are incredible opportunities.”

XFL TV partners ABC, ESPN and Fox had the closing spread and total on their scorebugs at the bottom of the screen and broadcasters mentioned betting on-air. Sports betting network VSiN also conducted two live “BetCasts” during games.

With the built-in Vegas tie from the inaugural season, the ISL might consider something similar. In fact, fans from out of the town at the Finale told SwimSwm they had come to Vegas expecting to be able to bet on the race outcomes, and were disappointed when they couldn’t.

Sports gambling is no longer the taboo subject it once was. It’s legal in 13 U.S. states, as well as parts of Europe and Asia. Adding a built-in betting component to the ISL might encourage fans to have a stake in the racing and build a connection to a sport with which they might have little other experience.

This is huge. One thing I do when I want to watch live sports, but can’t due to “life” is to “tape” / PVR the event, then watch it later. I can’t do that with ISL and so I miss most of the events. With so many TV channels out there, surely someone can pick this up?

How about retaining some off-field interviews (an athlete’s story) right before the events? I think that might be a contributor of swimming’s popularity on the NBC Olympics. Those 2-3 minute stories can add a lot appeal to an athlete that’s out of the spotlight for 4 years and have audiences want for them to win.

Also a good idea. There are so many more good stories than the ones that get repeated over and over again at the Olympics.

This is another problem in swimming. In most other sports (tennis, bball, track, baseball), you get to see the human emotions played out in the game itself. Not so in swimming. I think part of the reason many people (swimmers and swammers included) find swimming boring to watch is that there is so little connection to the humans. If anything, swimming needs to overemphasize interviews since there’s little other emotions displayed during races. People love watching relays in large part because you can SEE the emotions playing out for the 3 swimmers on deck.

I propose a moat around the competition pool where a 1500 is raced open-water style. It’d boost viewership immediately

eh I think they should use salt water pools and just dump a bunch of different shark species in it. The gambling would be on which shark would bite which swimmer first.