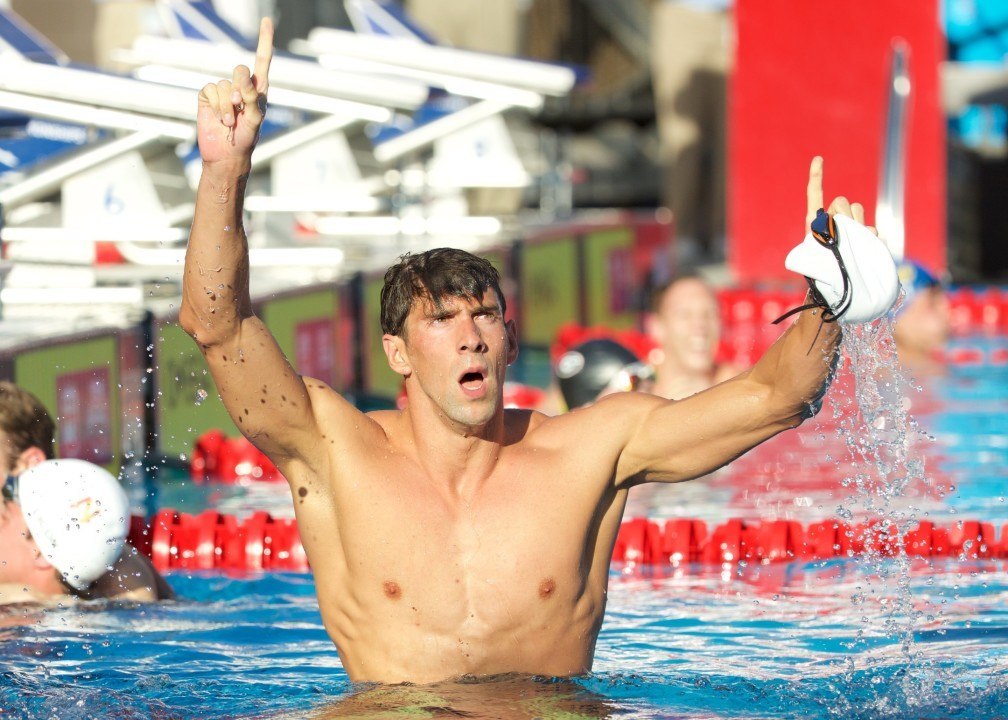 A year has passed since Swimnex released its mathematical predictions for the 2016 Olympics, and the Swimnex creators have tweaked their formula to come up with an updated set of predictions with less than a year to go before the Rio Games. Archive photo via Rafael Domeyko

One of our most popular posts of last fall was a mathematical predictor of exactly what times would be needed to reach each level at the 2016 Olympic Games based on the trajectories of each individual event.

A year has passed since that piece, and its creators have tweaked their formula to come up with an updated set of predictions with less than a year to go before the Rio Olympics.

The predictive model is called “Swimnex,” and is the brainchild of Joshua Neuloh and Thomas Kothe.

Among the touted success of this model at the 2012 Olympic Games included predicting the World Record race by Cameron can der Burgh within a difference of three-tenths of a second and forecasting the way through the stages of the women’s 50 free by an “average error of just .01%.”

Neuloh and Kothe were kind enough to share their data with SwimSwam and our readers, and you can compare the newly-projected times to their 2014 counterparts by following this link to last year’s story.

The predictive formula produces expected times for a range of placements at the 2016 Olympics, including:

While Neuloh wouldn’t reveal his full methodology, he looked at thousands of race results and tried to find patterns and account for various influencing factors. The data going into the predictions is vast, which explains why the changes between the 2014 and 2015 projections are very minimal.

Here are a few of the more notable changes from last year’s numbers:

That would be contingent on both Ledecky & Franklin firing on the same night …. which has yet to happen. Realistically their 3rd & 4th legs have tended to be serviceable at best (1.57 performances and maybe a 1.56 high at best). Schmitt may strengthen the team but, as yet, that is a very large maybe rather than a bankable certainty.

The general scenario for this relay prior to this years Worlds was that the USA was often behind at the final change but a complete “stormer” anchor leg clinched the deal. Whilst AUS MAY rejoin the medal equation in Rio, no one is likely to be inside 7.45 OR challenging USA. Breaking the WR is plausible but the predicted… Read more »

By definition wr happens when everything is going right. I agree with you that USA team will be very careful especially with exchange and 1.5 sec is quite optimistic. Plus I don’t know if this relay can interfere with solo races of Ledecky and Franklin. I just would like to note that breaking a wr is not ridiculous thing if usa coaches will focus on this target.

50FS maybe a tad optimistic for gold, will take sub24 but how far
100/400/800 fair enough, maybe conservative but people need to acknowledge that Ledecky’s WR run, like all such “runs”, must come to an end. Question is whether Rio comes before or after.
200FS gold time probably optimistic
100/200BACK gold and medal times are highly optimistic, the 200 excessively so
100/200 BRS times look reasonable enough as does 100FLY but 200FLY very debateable
200IM times reasonable but 400IM gold & medal debateable
4X100 medal time looks optimistic. Whilst NED could make it, I’m struggling to see USA dropping over 1.7sec from Kazan
4×200 & 4XMED gold and medal times… Read more »

Sjostrom can be faster than the gold time.. but we haven´t see much girls going sub-57 lately, and I find it hard to expect 2 girls (Apart from Sjostrom) going 56,15 or faster

If a man breaks 47 in the 100 free in Rio AND he is clean I will be a very surprised (and pleased) swimming fan. I would not hold my breath though.

And the 200? Even with Agnel in top form, going 1:42 in textile would be an incredible achievement.

Missy can go 1.54mid to high. She’s a good 200free racer (Missy). Usually tactical races produce slower winning times; Pellegrini has won major titles in not so splendid times in view of her tactical prowess in this event. she’l need something special (Pellegrini) to medal in this eveno

Ledecky will have wr at 400 trying to go under 3:58. Nobody but Sjostrom and Ledecky will go under 1:55. They will race against each other but not time. The winner will finish with 1:54 low.

Ledecky will go 3:59 and 8:11 at a long course Pro Swim meet this winter, not at the Olympics.

I know that after this summer, everyone is sure Phelps will break the IM WR, but I really have my doubts anyone goes 1:53 next summer. I fear that Lochte and Phelps would have to 1) be in absolute perfect condition and 2) execute absolutely perfect races. The margin of error is just too small. Phelps was in fantastic shape in August, but how much higher is the ceiling? There’s a lot of “well he’s got another year to put in work…” talk, but Phelps has been back in training long enough that he’s probably close to his physiological limit regardless of how much work he puts in.

Hagino doesn’t quite have the power at the moment. Watching his… Read more »

Do the people who made these predictions believe that Katie’s not going to Rio at all?

Hahaha I was wondering the same thing. I think Katie would be disappointed with her swims if she would do the times they are predicting