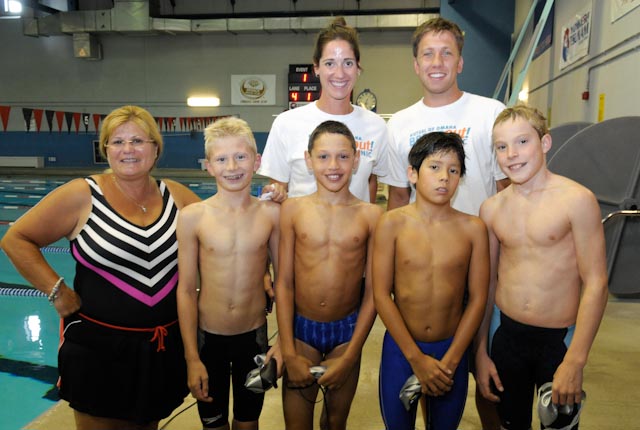 The Westchester Aquatics Club in Yonkers, New York has broken a National Age Group Record in the 10 & under boys 200 yard free relay.

At a Breakout Swim Clinic over the weekend with fomer Olympic medalists and World Champions Mark Gangloff and Kristy Kowal, the group of Nick Torres, Brendan Lee, Yugo Tsukikawa, and Ryan Maierle swam a 1:48.42. That cleared the old mark swum back in 2004 by the Canyons Aquatic Club relay that was made up of Bob Hwang, Riley Mita, Janathan Hwang, and Alex Ngan at 1:48.69.

The group from Westchester is coached by Carle’ Fierro, a former head age group coach at the nearby Badger Swim Club. Fierro spun-off the Westchester Wolverines in 2010, after winning two High School Swimming Coach of the Year awards, as well as the 2008-2009 Metro Swimming “Age Group Coach of the Year” award.

Not all LSC’s recognize Time Trials as records, but USA Swimming does assuming they meet all proper guidelines. This meet had both timers and 4 officials present, with an electronic Colorado Timing System used for the official result.

I will consider them all failures unless this is the Olympic medley relay come 2024.

“Not all LSC’s recognize Time Trials as records, but USA Swimming does assuming they meet all proper guidelines. This meet had both timers and 4 officials present.”

You would think in this day and age, that there would need to be touch pads set up for a USA swimming record (and not just timers…and perhaps there were). Regardless, congratulations to these young boys. I remember Bob Hwang when he was 10 – was definitely a big, strong boy for his age

I believe 3 of the 4 boys from the Canyons relay (are still swimming today in college).

OneWouldThink – to clarify, the timers are required as a backup for a time to be ratified. I don’t know for a fact if touch pads were in place, but can ask.

I was at the time trial and touch pads were used

Touch pads were used I was there! And there where three timers per lane and four officials verified it! Thanks for all the positive support guys
Chris Dewey
Asst coach
Westchester Aquatic Club