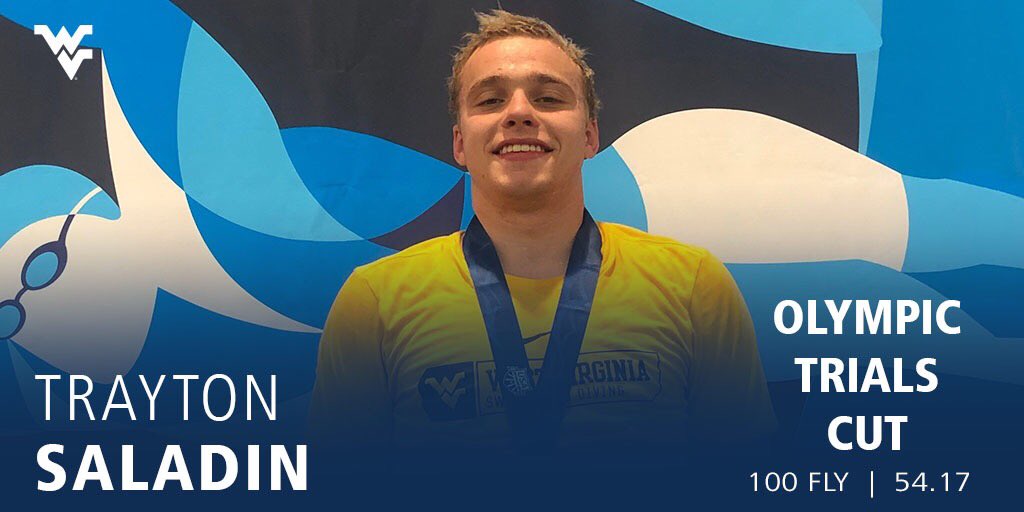 Trayton Saladin was all smiles after hitting his first Olympic Trials cut on Friday - and West Virginia doesn't quite have access to its long course pool yet. Current photo via West Virginia Athletics

When West Virginia University announced the pending construction of a new $15 million 50-meter indoor aquatic facility on campus, head coach Vic Riggs called it a “game-changer,” and fawned at the opportunity to finally give his swimmers a true long course training facility that the school has never had before.

“We’ve talked with the kids and I’ve talked with the staff about this,” Riggs said in 2017 when the project was revealed. “They’re not building this for us to be where we are right now. We need to go in there and produce at the highest level. It affects everything from just walking into your facility, to morale all the way up to being able to compete in a first-rate facility.

While construction of that new facility is in its final stages, and its expected to be open by the time school returns this fall, the Mountaineers have already found ways to make leaps in long course, specifically in the form of rising senior Trayton Saladin, who on Friday at the Geneva Futures Championships swam a 54.17 to mark his first Olympic Trials standard. That slid .02 seconds under the requisite standard to qualify for Omaha.

His previous best time coming into the meet was a 55.28, which qualified him for Winter Nationals but no further. He was the only new Trials qualifier (barring relay leadoffs – splits were not available as of posting) on the day in Geneva.

Finishing in 2nd place in that race was 27-year old Matthew Salig in 54.47. While that was a lifetime best for the former Penn State Nittany Lion, and was a US Nationals cut, it was just short of the Trials cut of 54.19.

While Saladin was the only new Trials cut of the day, his was not the only headlining swim: UNC Wilmington’s Gianmichel D’Alessandro won the men’s 100 breaststroke in 1:03.80. That swim obliterated his old best time of 1:06.04 that was set in 2017. His best time is a 54.28 in yards, and he only dropped a few tenths during the NCAA season, making his big result in the 100 breaststroke even more surprising.

On the women’s side, the highlight was a 4:55.23 in the 400 IM from Duquesne rising senior Emma Brinton. Her best time coming into the meet was 5:02.53 from June of this year. Already one of the most accomplished swimmers in Duquesne program history, she is the two-time defending Atlantic 10 Conference champion in the 400 yard IM, and the conference record holder in the event.