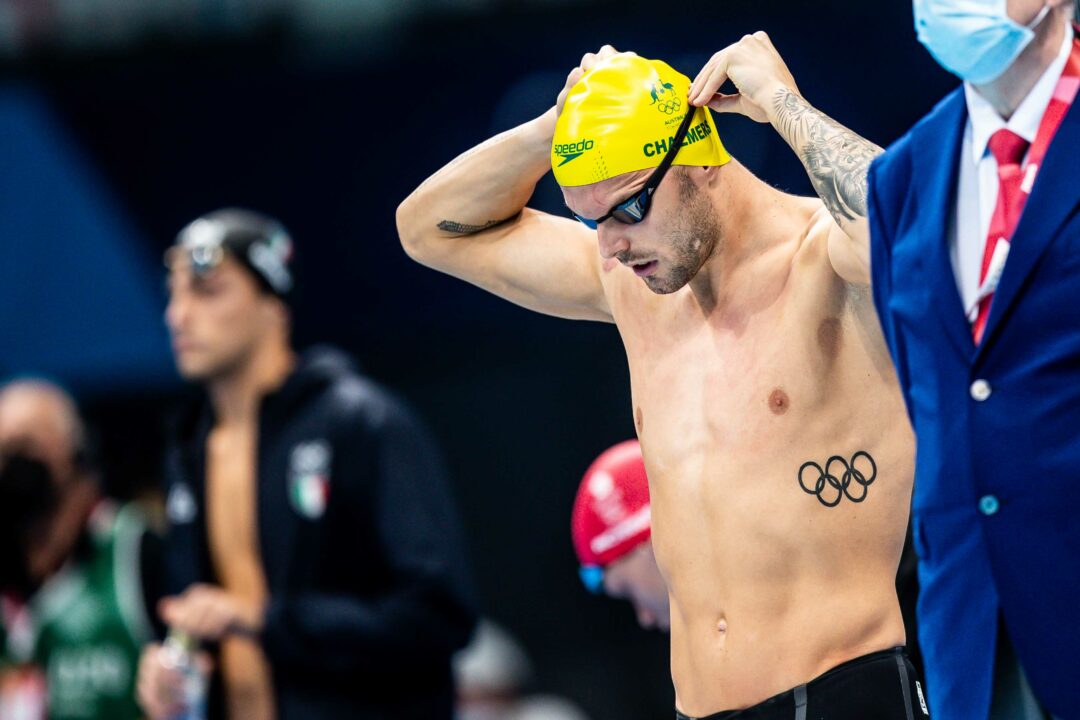 23-year-old Kyle Chalmers of Australia nearly stopped the world on its axis tonight in Kazan as he posted a monster 44.84 World Record in the men’s short course meters 100 freestyle.

His time knocked .10 off of Frenchman Amaury Leveaux‘s WR time of 44.94 that’s been on the books well over a decade since 2008.

Catch the man in action below, scorching an opening split of 21.40 before closing in 23.44 for his monumental achievement.

Watch the full event at the Swimming World Cup 2021 in Kazan.#swimming pic.twitter.com/XTFrWSbs7t

Tonight it was mission accomplished for 23-year-old Kyle Chalmers, as the Australian pumped out a shiny new World Record in the men’s short course meters 100 freestyle.

While competing on day 2 of the final FINA World Cup stop in Kazan, multi-Olympic medalist Chalmers blasted a time of 44.84 to not only stand atop the podium here but also stand atop the list of fastest men ever in the event.

His time overtakes the previous storied World Record of 44.94, a time Frenchman Amaury Leveaux put on the books over a decade ago in 2008. Since then, many have come close, including Russia’s Vlad Morozov who hit 44.95 in 2018 but the record stood tall…until tonight.

Chalmers set the 100m free dominance stage early, having claimed the top seed of the morning in a time of 46.74. That was a relaxed swim from the South Aussie who established a new Australian national record and Oceanic continental record with a blistering 45.03 last week in Doha. That time checked in as the 3rd fastest performance in history.

After registering a new Aussie and Oceanic record in the 50m free yesterday here in Kazan, Chalmers publicly took aim at the 100m free World Record, with his PB standing less than .10 away entering this meet.

Split comparison below shows how Chalmers roared out in the front half, dropping jaws with a big-time 21.40 before clocking 23.44 on the 2nd 50.

Chalmers took the 100m freestyle Olympic gold medal in Rio 5 years ago at just 17 years of age, whereas he settled for silver at the 2020 Games in Tokyo behind American Caeleb Dressel.

It’s important to note that Chalmers has had a series of heart surgeries since Rio, all addressing his Supraventricular Tachycardia (SVT). He also underwent shoulder surgery in November 2020.

Chalmers going out fast is scary

Maybe the Long C is possible now at the Comms.

Agree, especially with his utterly wicked back half. We indeed could see the suited LCM WR go down. Finally!

Well, well. He finally has ONE world record.

Had the junior world record for about 4 years LC.

He has a gold Oly medal though, I think I would settle for that

I don’t mind a bit of the US/Aus rivalry that goes on here. It’s a little silly but I find it entertaining when it’s in good spirit. But there are some people (on both sides) who will just insult any swimmer from another country who does well. It really annoys me. Tony never says anything interesting or positive: it’s always just insulting swimmers who aren’t from USA.

So, he beats a suited WR by going faster in the first half, which is usually the way to beat suited records, but not what you expect from Chalmers.
I wonder how this new front end speed translates in LC.
I bet nobody was expecting these quantum leaps 5 years removed from Rio. Exciting.

KYLE IS SIMPLY A MONSTER. he did what Morozov failed to do by 0.01, and I was so disappointed back then, but now another one GONE. With those health issues not only he is still a champion of this sport, but he gets multiple Olympic, Worlds medals and sets a world record. I’m not overreacting, we are witnessing someone who will go down in history as one of the best.

Yes, this has lifted him up the ranks..an Olympic Gold and WR…they are very hard to come by these days!