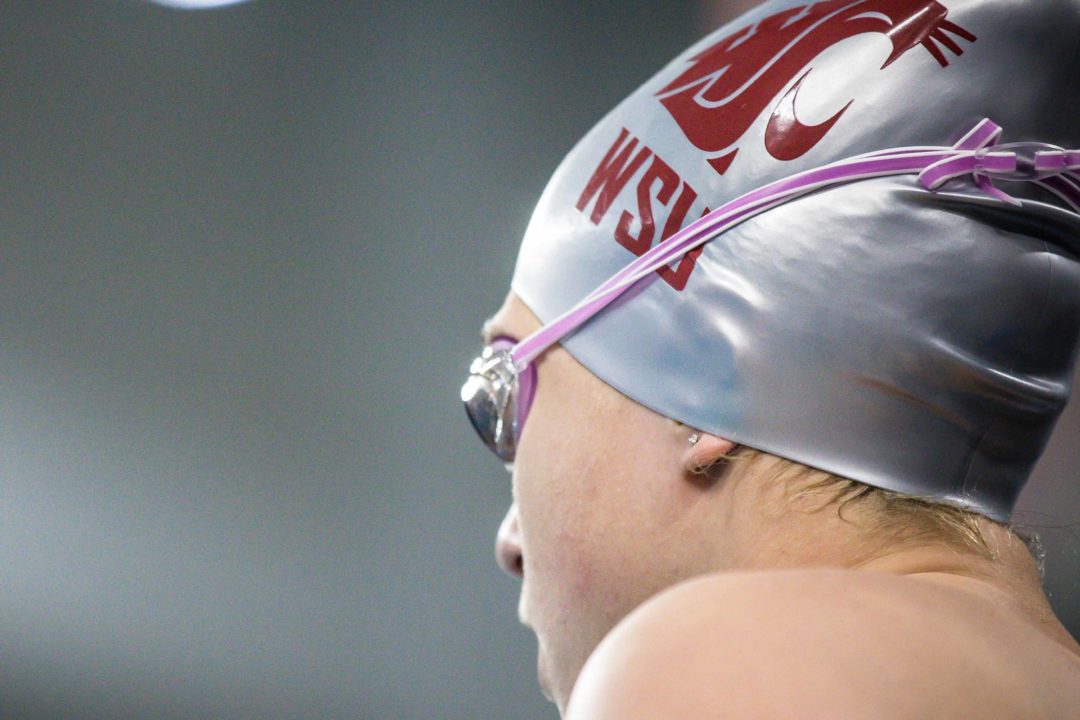 Seniors Mackenzie Duarte, Chloe Larson and Taylor McCoy have been selected as the Cougar team captains for the 2020-21 campaign. Archive photo via Jack Spitser/Spitser Photography

“It is exciting to elect captains again after a two year hiatus. As we continue to grow, we are looking for people that will follow our equation for success of family first, academics second and competing third. Chloe, Mackenzie and Taylor have shown through their dedication that they not only hold themselves to these standards, but also are able to communicate and hold their teammates to the same high standards,” Leach said. “The growth of our Cougar Swimming Family is so important as we continue to set the tone for the 2020-21 season and beyond. We are all very eager to get back in the pool and continue our family’s development in the classroom and in the pool. Congrats Chloe, Mackenzie and Taylor! GO COUGS!”

Duarte is a three-year letterwinner, owns 13 career wins and three WSU Top-10 times including the school-record in the 200 Breastroke. The Walnut Creek, Calif. native had a breakout sophomore campaign becoming the Cougars’ first NCAA Championships participant since 2010 after setting the school-record in the 200 Breast at the Pac-12 Conference Championships. Duarte also earned Pac-12 All-Academic honorable mention as a sophomore before earning a spot in the postseason CSCAA National Invitational and recorded a U.S. Olympic Trial Time in the 200 Breast as a junior.

“Being selected as one of the WSU women’s swim team captains for the 2020-21 season means that I have been given the opportunity to lead our team in and out of the water,” Duarte said. “I hope to inspire my fellow teammates to work to their highest potential and create culture of strong female athletes who can trust and support each other, work hard, and leave behind a legacy of success and family.”

Larson is a three-year letterwinner, owns four career individual wins, 10 winning relay teams, a pair of WSU Top-10 times and was a member of the school-record 400 Free Relay team. The Rapid City, S.D. native is a two-time Pac-12 All-Academic selection and enjoyed a breakout junior season with three individual wins and earned a trip to the postseason CSCAA National Invitational.

“Being selected as a captain for this upcoming season is such an honor and a privilege,” Larson said. “Alongside Taylor and Mackenzie, I hope to continue our family culture and lead this team by example so we can be a competitive Pac-12 team.”

McCoy is a three-year letterwinner, owns 19 career individual wins and four WSU Top-10 times. The Pullman, Wash. native is a two-time Pac-12 All-Academic selection, posted a U.S. Olympic Trial time in the 200 back and earned a trip to the postseason CSCAA National Invitational where she won the 400 IM.

“I’m honored to be a team captain this year alongside Chloe and Mackenzie, and am excited to help continue to grow our team culture!” McCoy said. “Our team thrives on family and challenging each other to be the best in and out of the pool every day. It will be an amazing privilege to help achieve our goals for the upcoming season! Go Cougs!”