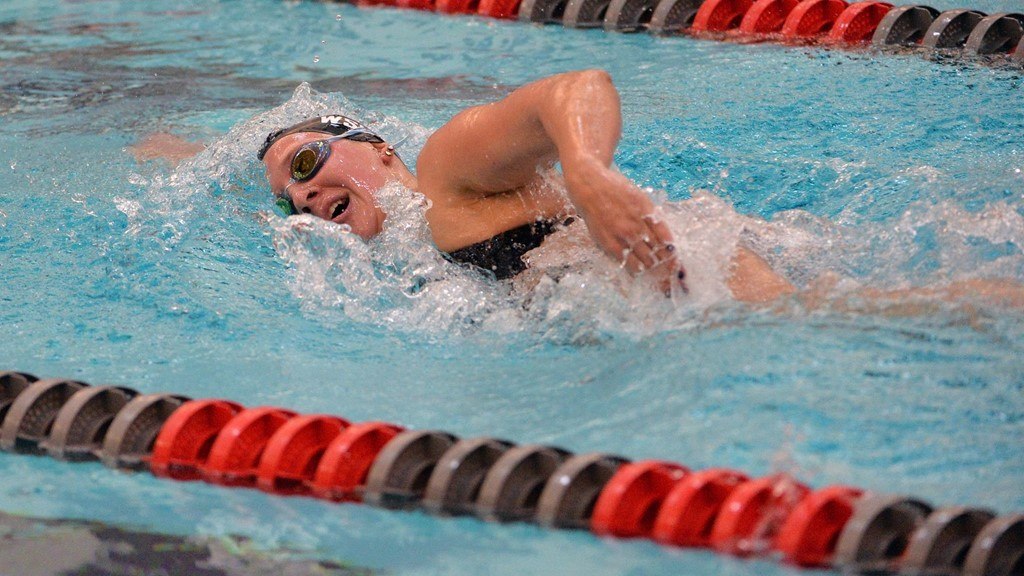 Falk continued her impressive freshman campaign by contributing 18 points to the Cougars’ total. The Portland, Ore., native took first place in the 1000 free with a time of 10:20.76, and later added a first place finish in the 500 free touching the wall in 5:00.02.

The Cougars started the meet with a splash, taking the top spot in the 400 medley relay. The team of Jasmine Margetts, Angela Mavrantza, Anna Brolin and Hannah Bruggman clocked a 3:48.94.

Bruggman notched a win in the 100 free with a 51.66, just ahead of teammate Haley Rose Love who finished second, touching in 52.18. Love recorded her first win of the season with an impressive performance in the 50 free, clocking a time of 23.95.

Washington State also garnered first place finishes in the 200 free and 200 fly. Junior Rachel Thompson finished the 200 free in 1:52.85, out-touching Northern Arizona’s Kimmy Richter by .10 seconds. Senior Elise Locke secured the top spot in the 200 fly with a time of 2:02.01. Mavrantza notched her fourth win of the season with an impressive performance in the 200 breast, touching the wall in 2:19.81.

Washington State next travels to Columbus, Ohio to compete at the Ohio State Invitational. The invite will begin on Friday Nov. 18 and end on Sunday Nov. 20.

PULLMAN, Wash. – The Northern Arizona swimming & diving team stopped in Pullman on Thursday on the first leg of their weekend road trip, but dropped a 129-70 decision to Washington State. The Lumberjacks picked up victories in the final two events and are now 0-4 in dual meets – with two of the four losses coming to Pac-12 foes – this season.

“We had some people in some different events than our normal lineup would be,” said head coach Andy Johns. “We did have some great swims though and we managed the travel today. It was tough to come off the road especially against a Pac-12 opponent, but all in all I’m pleased with the energy we had today. We’re looking forward to racing again tomorrow.”

Senior Urte Kazakeviciute posted NAU’s lone individual win in the 200 breaststroke with a time of 2:20.68, while NAU collected first in the day’s final relay. The Lumberjacks’ all-junior team of Alina Staffeldt, Kimmy Richter, Claire Hammond and Roni Houck collected nine points for NAU in the 200 freestyle with a time of 1:38.45.

Washington State claimed the nine other events in an abbreviated 11-event dual list, but there were a number of other standouts to be found in NAU’s lineup. The Lumberjacks’ ‘A’ 400 medley relay team placed second to open the meet posting a time of 3:54.48, and then Richter clocked a season-best time of 1:52.95 in a runner-up finish in the 200 freestyle. Sophomore Andrea Schmidt then narrowly missed posting a season-best time herself in the 50 free, but did manage to finish second with a time of 24.12 – just .01 seconds off her best.

Staffeldt and Schmidt combined to go two-three in the 200 butterfly and Rouck would place third in the 100 free with her own season-best time of 52.55. Freshman Fernanda Montiel was NAU’s top backstroker in the 200, and was followed by Hammond and senior Sara Lenhoff to occupy the three-through-five spots.

NAU’s divers did not compete on Thursday with Washington State not fielding a diving team.

The Lumberjacks will have the luxury of their divers on Friday when they make the short drive across the Washington/Idaho state border to take on the Vandals of Idaho. The meet will start at 4 p.m. Arizona time and will mark the first time this season that the ‘Jacks will compete on back-to-back days this season.