Washington & Jefferson’s Michael Orstein To Retire At End Of Season 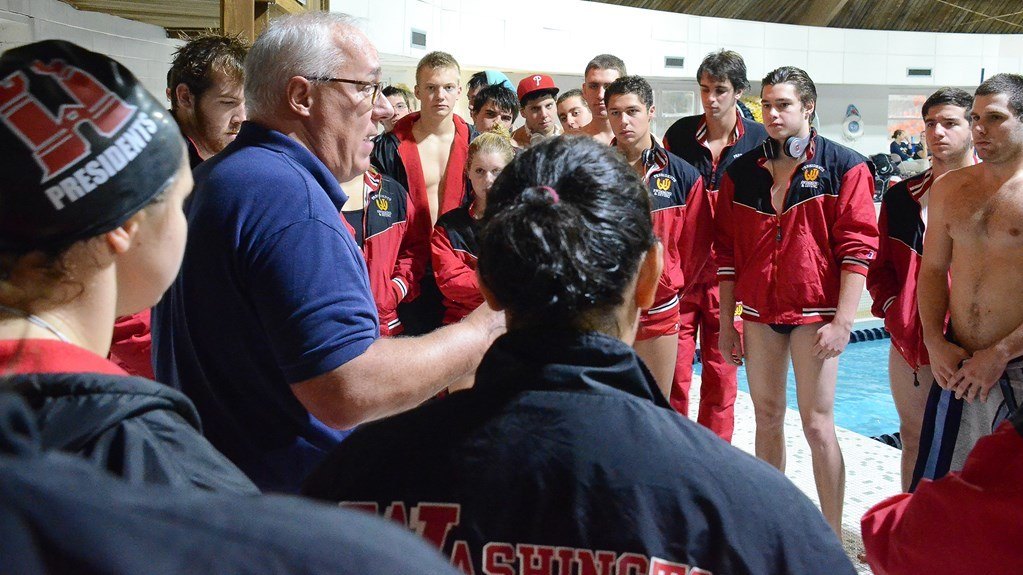 For 30 years, Michael H. Orstein has been an institution at Washington & Jefferson College as head men’s and women’s swimming & diving coach and so much more. But his time at the College is coming to a close as the Hall of Fame coach has announced that he will retire at the conclusion of the 2017-18 academic year.

“It has been a privilege and an honor to represent the 11th oldest college in the United States and I have taken a great deal of pride in doing so,” said Orstein. “To say that I have been blessed to coach at Washington & Jefferson College is an understatement — it has certainly been an unbelievable experience! Both my son, Jepthah, and daughter, Kaitlyn, have graduated from this first rate institution! And I truly hope that I have given back to W&J as much as it has given me throughout the years.”

His accolades stand for themselves: a 34-year coaching record of 545-244-4, while his mark at W&J is 487-219-3; he has received 15 Presidents’ Athletic Conference Coach of the Year awards, produced eight national champions, 17 All-Americans, 36 NCAA Division III Swimming and Diving Championships qualifiers and 251 PAC champions; and he has coached his teams to nine PAC titles, 221 school records and 61 conference marks.

From 2004-2008, Orstein coached his daughter, Kaitlyn, to one of the most impressive careers in the history of NCAA Division III swimming. Kaitlyn won eight national championships and earned 14 NCAA All-America citations. She won 25 conference championships and was a four-time PAC Swimmer of the Year.

But Orstein was more than just a swimming and diving coach at W&J. A mentor and friend to so many, he was honored with the Dr. Martin Luther King, Jr., Distinguished Service Award for outstanding leadership in 2005 by the College. He has also been inducted into two chapters of the Pennsylvania Sports Hall of Fame (Washington-Greene County, May 2014 and Susquehanna Valley in May 2016) as well as the Western Pennsylvania Jewish Sports Hall of Fame in 2015.

He was responsible for the emergence of water polo as a sport at W&J when he secured a $60,000 grant from the United States Olympic Committee in April 1999 to help fund the program’s development. During his four seasons as head coach, both men’s and women’s teams were ranked nationally in the top 10 every year and he produced three All-Americans in that short period of time. In 2002, Orstein was the Division III Tournament Championship’s Coach of the Year and the Collegiate Water Polo Association Southern Division Coach of the Year.

Prior to his helping form the water polo programs at W&J, Orstein served as the head men’s and women’s track & field coach. Under Orstein, Jaimee Heffner became the first W&J female athlete to win an individual NCAA championship when she won the 1997 Division III Championship in the women’s javelin. She ended her career at W&J with honors including being a four time All-American, nomination as one of 10 finalists for the NCAA Woman of the Year Award, and the reception of an NCAA Postgraduate Scholarship Award.

“Coach Orstein is an ethical man who has instilled important values into every student-athlete he has mentored. We will miss his wisdom, his expertise and his leadership. Personally, I will miss his remarkable ability to see the great potential of every individual he encounters. We wish Coach Orstein well and we thank him for transforming our aquatics programs at Washington & Jefferson College.”

From 1979-1982 Coach Orstein gained international experience through his position in Bermuda as the first Aquatics Director at Warwick Academy. During his time in Bermuda, he coached numerous national champions and record holders, and was integral in the revival of water polo through his position as the player/coach for the Belmont team.

He then returned home to Pennsylvania where he served as the Athletic Director at York Country Day School and as the head women’s swimming coach at York College (Pa.). During his tenue, he built the York team into a regional Division III power and rewrote the college’s record books.

Orstein was a four-time All-American swimmer at Springfield College (Mass.), where he completed both his B.S. and M.Ed. in Physical Education. Born and raised in Lancaster, Pennsylvania, he was an all-state swimmer in high school and an all-district track & field athlete at Manheim Township High School.

Orstein and his wife, Heather, have been happily married for nearly 40 years and reside in East Washington. Their son, Jepthah, is a 2004 W&J alumnus and 2008 graduate of the Duquesne University School of Law, while Kaitlyn graduated from W&J in 2008.