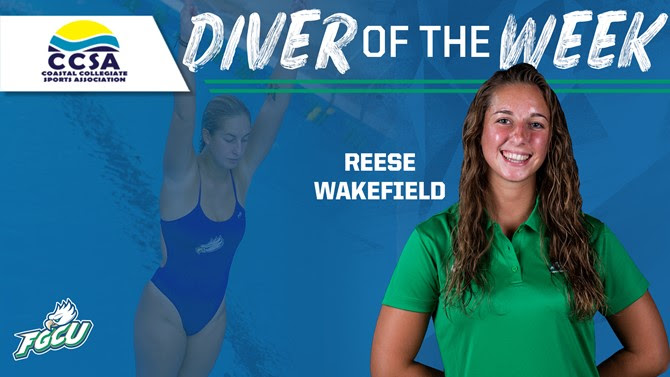 ATLANTA – For a record-breaking fifth time this season, FGCU swimming & diving freshman Reese Wakefield has been named CCSA Diver of the Week. The weekly honor, which was announced by the league on Tuesday afternoon, sets a new CCSA record for the most weekly diving accolades collected by a freshman. The previous record was held by UNF’s Julia Moomaw, who was honored four times during her rookie campaign (2009-10).

During the Eagles’ (7-5-1, 4-1 CCSA) most recent meet against CCSA rival Liberty, Tulane and Illinois State, Wakefield (Guelph, Ontario, Canada/Bishop Macdonelle CHS) cruised to wins on both the 1m and 3m boards. She outscored the runner-up by over 30 points en route to collecting her fourth win of the season in the 3m event and edged Liberty’s Abigail Egolf Jensen by just .40 points in the 1m event to claim her third victory on the lower board.

“It was great to see continued solid performances from Reese this weekend,” head coach Dave Rollins said. “Reese and the rest of our diving squad have helped lift our program every meet. It’s fantastic to be able to have such a strong group of student-athletes working together.”

Wakefield, who has already hit the qualifying mark for NCAA Zones on both the 1m and 3m boards, is just one honor away from tying former Eagle Ashley Wright (2015-17) for the most weekly diving accolades earned by any student-athlete in CCSA conference history. Wright was selected six times during both the 2015-16 and 2016-17 seasons.

After a weekend in which they defeated Illinois State, tied Tulane and fell to Liberty, the Eagles are now gearing up to host Stony Brook this Saturday, Jan. 11. The meet against the SeaWolves (4-4, 0-1 America East) is set for an 11 a.m. start and will be held on Faculty/Staff Appreciation Day at the FGCU Aquatics Complex. Fans are encouraged to participate in a white out.