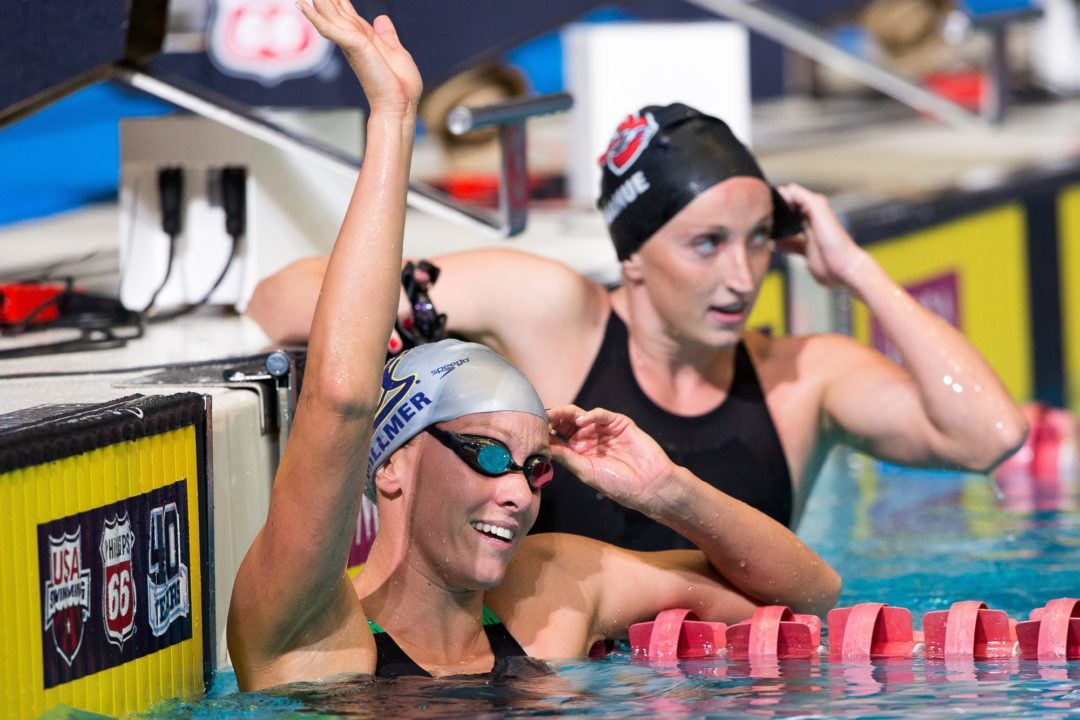 Dana Vollmer can now breath a little easier knowing that she will have a seat reserved for her on the flight to Barcelona. Vollmer took the 100 butterfly in a season’s best time of 57.53 to qualify for her first event at the World Championships.

Vollmer’s time is the third fastest time done in the world this year. Even though she scratched the 50 fly earlier in the meet, this win gives her the option to swim that race as a second event at Worlds, which she’ll likely accept.

Claire Donahue turned at the half way mark nine one-hundredths of a second ahead of Vollmer in a time of 26.63, but she could not stay with the Olympic champion who made an incredible surge in the last 25 meters. Donahue finished second posting a time of 58.32, earning her way to Spain. Those two are the fastest first-50 swimmers in the U.S., and two of the best in the world, so don’t be surprised to see them sitting 1-2 at the turn in Barcelona.

She was followed by Stanford’s Felicia Lee who finished third in a time of 59.21.

As we’ve seen throughout the meet, Auburn’s NCAA Champion Olivia Scott took advantage of a scratch bumping her into finals by flying all the way up to 4th in 59.21.

Very good that Vollmer was asked about her start, underwater and turns. Namely, her start and underwater at the final just doesn’t seem to belong to WR holder. Specialities may be her best opportunity to improve in only a month left.

Mel Stewart, it would be cool if you could catch in interviews a few youngsters who shine this week like Cassidy Bayer or Justin Lynch. And they shine on butterfly. You should love that.