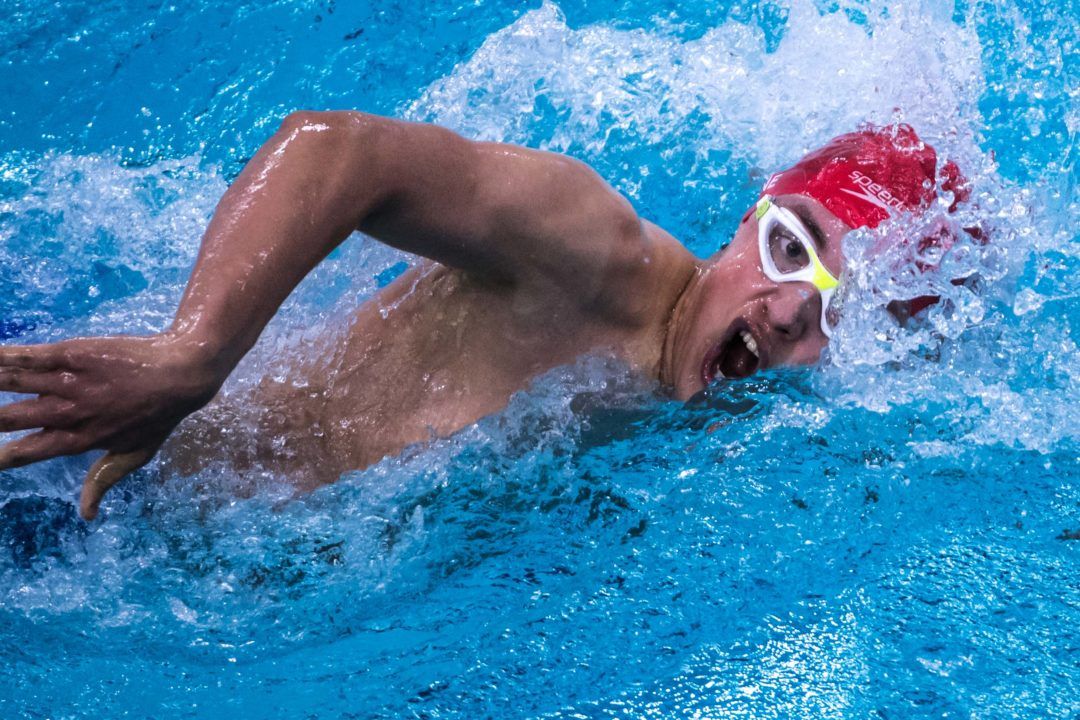 Virginia Tech freshman Lane Stone (above) jumped to 14th in the country in the 500 free on Sunday. Archive photo via Mike Lewis/Ola Vista Photography

Gniotczynski returns to Carroll after numerous head coaching stints in the area, including the head coach at the YMCA at Pabst Farms Swim Team in Oconomowoc.

“These incoming students fit very well with our philosophy and I am very excited to welcome them to the family,” said head coach Nick Wyllie.

What better place to rack-up a last-minute qualification for the NCAA Swimming & Diving Championships than at the pool that will host the upcoming (women’s) NCAA Championships: Ohio State’s McCorkle Aquatic Pavillion. With women’s invites already out, this was a men’s-only meet, where swimmers made a last-ditch effort to earn a spot at the men’s NCAA Championship in Minneapolis from March 21st-24th.

The Virginia Tech men started off the day by coming excruciatingly-close to a qualifying standard in the 200 free relay, swimming a 1:17.70 in the prelims session that is just .08 from the invite-standard. The team cruised through finals in a 1:23, meaning that they didn’t earn a relay invite (though they have the fastest non-qualifying-standard relay in both the 200 and 800 distances).

The Hokies otherwise had a successful day, though. Freshman Lane Stone swam a 4:14.73 in the 500 free, which ranks him 16th nationally and will put him easily into the meet. That makes him now the 3rd likely qualifier for the Hokies. If they had managed a 4th, they could’ve still entered relays via a backdoor that allows teams to swim Provisional Standard relays if they have 4 individual swimmers qualify.

The other swimmer to shore-up his NCAA qualifying on Sunday was Henrique Painhas of the hosts Ohio State. He swam a 1:42.47 in the 200 fly. That improves upon his 1:42.75 from Big Tens, which had him on-the-verge with a 31st-place national ranking. After his last chance swim, though, he ranks 26th, which is likely in to the meet.

Near Misses from Sunday:

Outstanding swim for Lane Stone — From a 4:20.7 in HS to 4:14.7 as a freshman at VaTech. Great swimming in Virginia is not isolated to Charlotteville!

Vote Up32-2Vote Down Reply
JP input is too short

I just have to say… these newfangled goggles look absolutely ridiculous!

And not in a good way?

Who cares how they look if they work well. What looks horrible are those suction marks around all the swimmers eyes from the current googles. Maybe these new googles will be more comfortable and reduce that.

Lane has worn those goggles for a while. I’ve heard he just likes the way they look

Lol he is wearing my Barracuda goggles from 1988