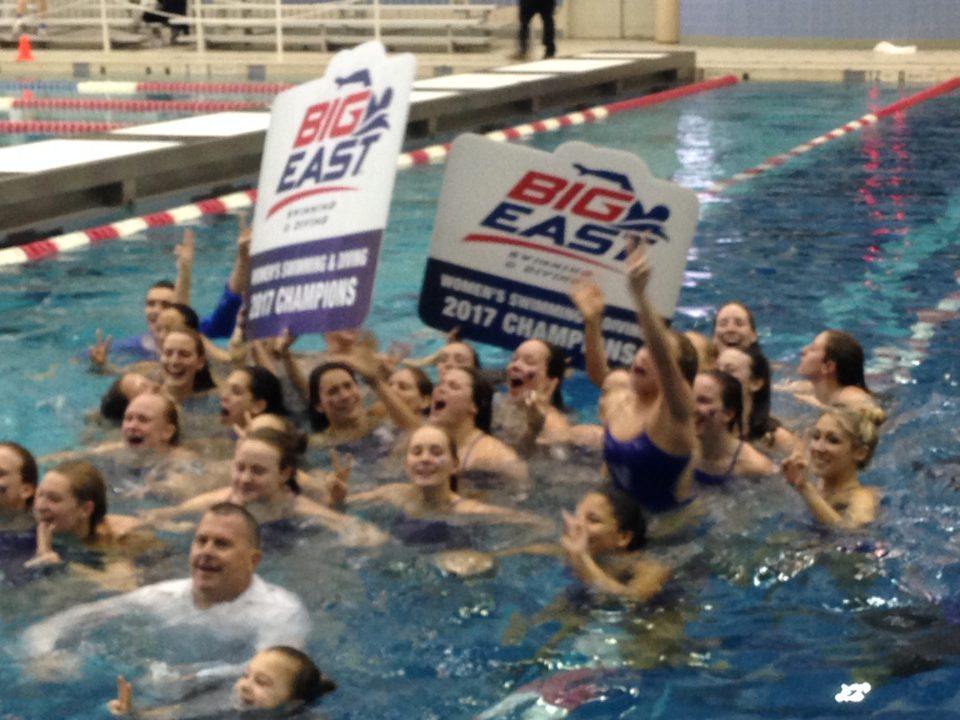 One race after another every one of these athletes gives their all. It is inspirational watching all of them – and to see the sportsmanship and camaraderie between teammates and between teams is just awe inspiring. During preliminaries you could see every kid digging a little deeper to do their best. Current photo via Gerry Dunn

One race after another every one of these athletes gives their all. It is inspirational watching all of them – and to see the sportsmanship and camaraderie between teammates and between teams is just awe inspiring. During preliminaries you could see every kid digging a little deeper to do their best.

200 Backstroke – Darby Goodwin of Villanova continued to impress with a time of 1:55.02 to take gold. Kathleen Duncalf of Georgetown (1:57.85) followed for second and Paxtyn Drew from Xavier (2:00.15) for bronze. Goodwin and Duncalf both made NCAA “B” cut.

100 Freestyle – Alex Fabbri once again showed her prowess in freestyle. She touched the wall in 49.70 for Gold. Teammate Taylor Wilson followed with a time of 50.19 for silver and Emily Conners of Xavier (50.40) for the bronze. Fabbri’s time in this event qualified her for NCAA “B”.

200 Breaststroke – Molly Fitzpatrick of Georgetown continued her strength in the breaststroke events with a gold medal. Her time of 2:11.16 beat Heather Farley of Villanova (2:14.50) to the wall for silver and fellow Wildcat Brooke Bruno (2:16.83) for bronze.

3m Springboard Diving – Preliminaries were exciting with Bridie Dunn, Meg Barnhorst and Elizabeth Miller battling for the lead. An incorrect dive for Bridie Dunn dropped her to fifth – and top three spots were owned by Georgetown. In the finals – Meg Barnhorst of Georgetown continued diving strong and took the gold in the finals with a score of 527.75. Elizabeth Miller of Georgetown was second (511.35) and Bridie Dunn of Villanova clawed her way back to third for the bronze (592.70) and a new Villanova Three Meter Record.

400 Freestyle Relay – Villanova continued its dominance of relays with a gold medal performance. The team of Wilson, Randolph, Goodwin and Fabbri won the event in 3:20.10 – making it a clean sweep of the relays for Villanova. Xavier took silver in 3:22.44 and Seton Hall took third in 3:25.34

200 Backstroke – Andrew Kelly of Villanova sped to gold with a time of 1:46.56. Teammate Justin Cucchi followed for silver (1:46.88) and Henry Hollinshead of Georgetown (1:48:12) took Bronze. Andrew Kelly had a NCAA “B” qualifying time in prelims.

100 Freestyle – In one of the closest races of the evening – Dakota Williams of Seton Hall out-touched David Bunnell of Xavier (44.95) with a winning time of 44.86. Noah Yanchulis of Seton Hall took bronze with a time of 45.03

Todd Michaels of Villanova was the Big East Diving Coach of the Year.

Final Team Scores at the completion of Meet – The Big East Swimming and Diving Championships: