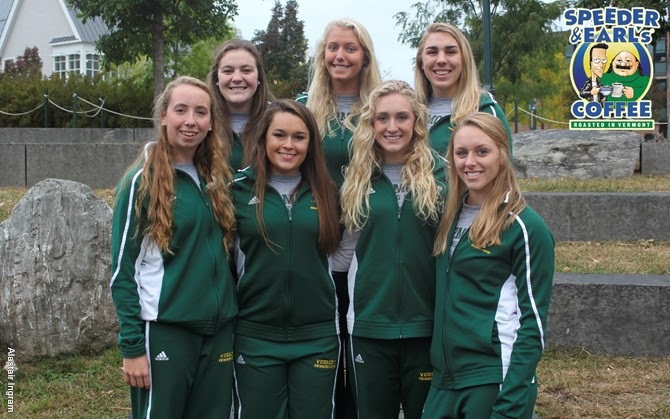 The Vermont women’s swimming & diving team (5-1, 3-0 AE) hosts the Rhode Island Rams on Saturday (Jan. 21) for Senior Day at Forbush Natatorium in the final tune up before conference championships. The dual meet is scheduled to begin at 12 p.m. and the team will honors its seven seniors prior to the meet at 11:50 a.m. Live video is available for free at CatamounTV.com.

SENIOR DAY
The Catamounts will honor their senior class of Carleigh Abromovitz, Molly Condron, Courtney Gray, Abby Holmquist, Sarah Mantz, Ali McClure, and Lauren Punger on Saturday before facing URI. The seven student-athletes have combined to win a total of 26 meets in their collegiate careers. They have helped lead Vermont to three straight third place finishes at the America East Championships, including a program-record point total in 2015.

LAST TIME OUT
The previously undefeated Catamounts suffered their first defeat of the season last Saturday in Boston, falling to the Northeastern Huskies by a final score of 199-101 at Barletta Natatorium. Kelly Lennon finished less than a half second behind winner Megan Clark in the 200 free with a time of 1:53.38, while Mantz took third overall in 1:55.58. Mantz also finished second in the 50 free with a time of 24.95 seconds and was a close second in the 100 free in 52.88 as Kira Hancock placed third (54.44). UVM closed the competition by winning the 400 free relay in convincing fashion with a time of 3:33.75.

SCOUTING RHODE ISLAND
The Rams enter the weekend 4-3 on the season but are coming off back-to-back losses to Wagner last Saturday and UMass this past Tuesday. URI finished last season with a 3-5 record and closed the 2016 Atlantic 10 Championships in seventh place with a total of 204 points. Mick Westkott is in his 40th year as the head coach of the Rhode Island swimming & diving program, leading the Rams to their best A-10 finish in program history with fifth place in 2015. Two years ago, URI fell in Burlington by a final score of 174-123. Rhode Island’s last win in the series came back in 2014 at home.

LAST YEAR’S MEETING
Vermont registered a 164-136 victory over Rhode Island last year in Kingston at the Tootell Aquatics Center as the Catamounts won nine of the 16 events. Lauren Punger was the champion of the 200 butterfly with a mark of 2:09.00 while Alexy Novelli took third in 2:10.84, one hundredth of a second from second place. Punger was also a third-place finisher in the 200 IM with a mark of 2:14.00.

WHO’S NEXT
Vermont will prepare for the 2017 America East Championships, which take place in Worcester, Massachusetts from Thursday, Feb. 9 to Sunday, Feb. 12 at WPI.