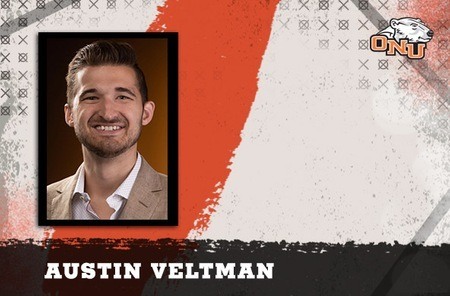 Austin Veltman has been named the head men’s and women’s swimming and diving coach at Ohio Northern University.

Veltman is just the fifth head coach of the ONU swimming and diving programs since 1990 and takes over for former head coach Peggy Ewald, who guided the Polar Bears to 19 Ohio Athletic Conference team titles from 2005-18.

“First and foremost I would like to thank ONU Director of Athletics Tom Simmons and the committee for giving me this tremendous opportunity to coach at Ohio Northern University,” Veltman said. “I feel very privileged to take over a program that is so strong, due to the hard work of former coach Peggy Ewald. I’m excited to be here and thrilled to be a part of such a great institution both academically and athletically.”

He earned a bachelor’s degree in business management from Hope in 2011.

While at Hope, Veltman was a four-year letterman for the Flying Dutchmen. He was a recipient of the Hope College Presidential Scholarship, was a member of the MIAA Honor Roll of Athletes and help Hope win three MIAA Championship titles.

Veltman is not married and resides in Findlay.

Good Man! This guy has worked hard for everything he has and really knows how to relate to people. Great hire by ONU.

Why they gotta call a guy out for not being married? Haha