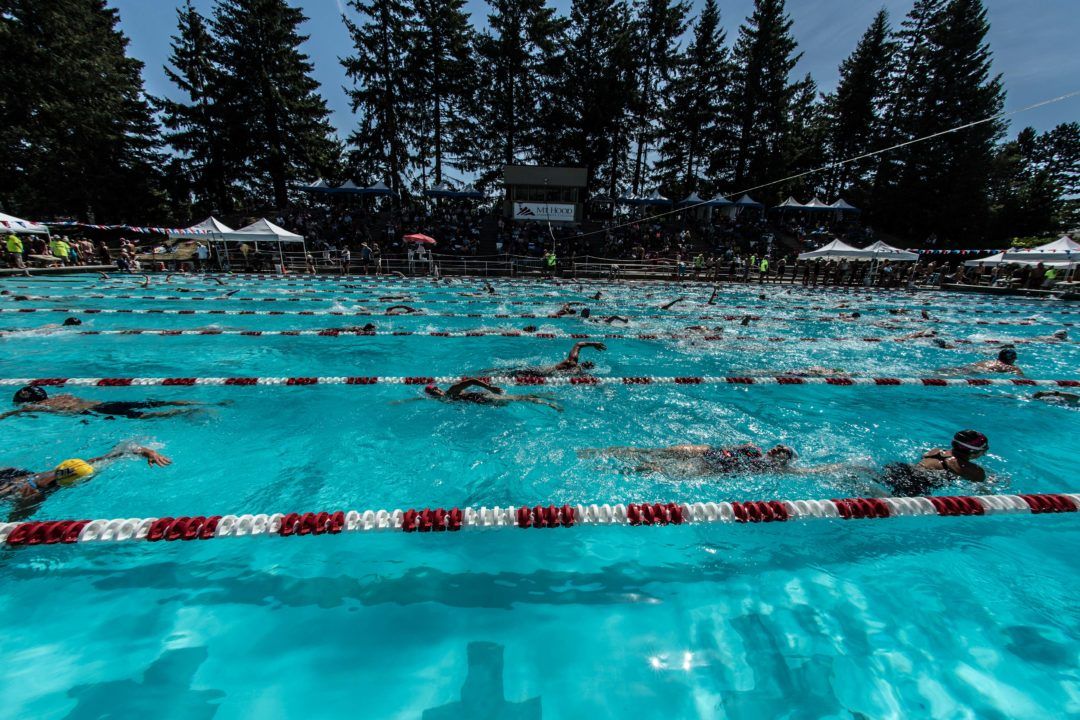 Learn how to perfect your breaststroke from some of the best. Stock photo via Mike Lewis/Ola Vista Photography

More than 200 clubs across the country are participating in this initiative as interest in the sport increases during the Olympic year.

Lawrence Day of the Michigan Masters (pictured) led the way with five potential USMS and world records in the Men’s 70-74 age group.

Breaststroke can be a difficult stroke to perfect, whether you’re learning how to kick properly, nail your timing, or do any other number of things. But don’t worry. All breaststrokers, no matter how great they are, are always trying to improve their technique.

To help with your breaststroke technique, here are tips from four swimmers who won national championships in the 200 breaststroke on Friday, the third day of the U.S. Masters Swimming Short Course National Championship in Greensboro, North Carolina.

Mike Freshley understandably doesn’t recover as quickly at age 80 as he used to when he was younger. This causes him to limit his workouts to 2,000 to 2,500 yards/meters.

Because of how important a good breaststroke kick is for swimming the stroke fast, Freshley dedicates roughly one-third of each workout, 800 yards/meters, to doing breaststroke kick. His usual set is 8 x 100s focusing on quality, not just mindless kicking.

“The kick is 70 percent of the stroke,” Freshley says. “If you don’t have a kick, you’re screwed.”

After primarily swimming IM while growing up, he began doing more breaststroke events in college and continued to do the stroke in Masters. The Sarasota Sharks Masters member holds 21 USMS records and seven FINA Masters world records, largely in breaststroke and IM events.

Freshley’s kick has been the key to his success.

Although your kick provides the majority of your propulsion in breaststroke, you should still work on your catch. Britta O’Leary has spent years attempting to perfect hers.

For a proper catch, swimmers should begin with their hands in a streamlined position and do an out-sweep to slightly wider than shoulder-width apart before bringing their hands to just in front of their head. O’Leary, 36, likes to focus on her catch while using a parachute or a short stretch cord, items that also help her concentrate on finishing her kick.

O’Leary, a member of Atlanta Water Jocks, also recommends that swimmers not dive down when they stretch out into streamlined position following a stroke cycle.

A poor catch can leave you spinning through the water rather than swimming efficiently, something that’s especially noticeable in a 50 breaststroke.

“If you jump in and you do your breakout and if you don’t catch that first catch correctly in the 50, that’s it,” O’Leary says. “You don’t find your stroke. You don’t find the right catch.”

Sara Dunn receives questions about breaststroke technique all the time, but she never knows how to answer them. She relies heavily on feel, especially for her underwater pullout.

Being aware of how fast you’re moving through the water, a form of proprioception, is important for a good underwater pullout. Once you’ve dived into the water or pushed off the wall, you should perform your dolphin kick, do your pullout, and do your kick before you’ve slowed down, which requires an awareness of how fast you’re moving. If you want too long before doing one of those steps of your underwater pullout, you’re falling behind your competition.

But what’s the right timing? The answer is complicated.

The cues for having a good underwater pullout that Dunn tries to follow are having a tight streamlined position and not rushing through the sequence. To find what works best for her, Dunn will sometimes experiment with how long she glides during her underwater pullout. If it’s quicker, she’s found something new to do; if it’s not, it’s another piece of information.

A great underwater pullout takes a lot of time and work to develop.

Find Power From Your Core and Glutes

“My hips were sinking, and I couldn’t figure out why,” Guthrie says. “As soon as I started engaging my glutes and doing that posterior tilt, all of a sudden my hips are on the surface.

“[I try to] shorten that line from my sternum to my navel, which is kind of counterintuitive. We think about breaststroke, there’s kind of a little bit of arch in the lower back. You want to remove that completely. You want connect your glutes to the rest of your torso.”

Engaging certain muscles can be difficult, especially for swimmers who haven’t worked them much previously or struggle with range of motion because of an injury or age.

To help activate and strengthen his muscles, Guthrie, 61, who holds 17 USMS records and one FINA Masters world record in breaststroke events, began doing a calisthenics class several times a week when his pool was closed during the coronavirus pandemic.

“I’d never done a proper push-up in my life,” he says. “I didn’t know what proper form was, so when I started out, my goal was to do 10 straight push-ups. You need to work your way up to the full motion, to the full movement.

“My body just learned so much. I was just seeing constant gains. Calisthenics is fantastic that way. I’ve done yoga for years. I did strength and conditioning. I’ve done weightlifting. Nothing compares to calisthenics. I’m really exciting about transferring that to the pool.”