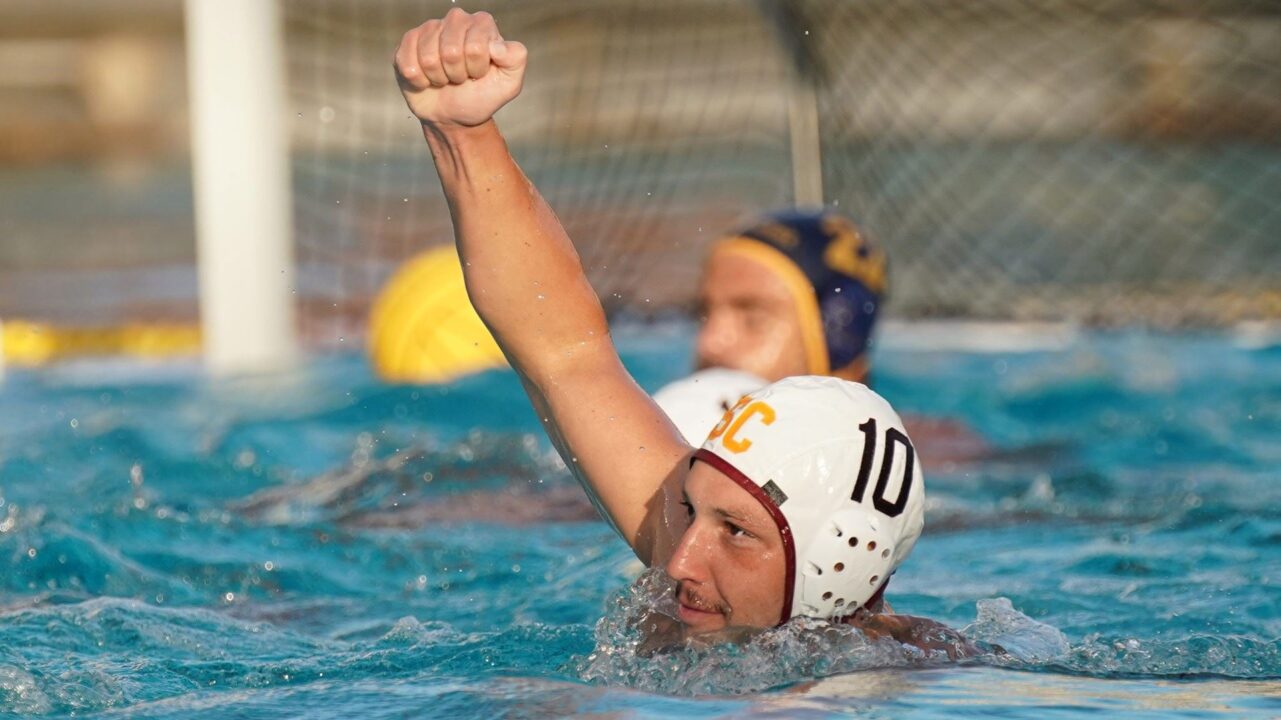 A five-goal rally in the fourth seals the Trojans' place in the championship game against UCLA. Current photo via Catharyn Hayne

LOS ANGELES, CALIF. — The USC men’s water polo team earned itself a shot at an 11th NCAA championship with a heroic 12-10 semifinal win over top-seeded California today at Uytengsu Aquatics Center. Trailing by two goals in the fourth period, the Trojans manufactured a five-goal rally to take control of things and punch that ticket to the title match. Host USC will face crosstown rival UCLA at 2 p.m. tomorrow (March 21) to fight for the rights to the postponed 2020 national championship. Normally held in December, the National Collegiate Men’s Water Polo Championship event was pushed to this March due to the delayed start to competition resulting from the coronavirus pandemic.

USC is making its 15th NCAA final appearance in the last 16 years, with six of those finals coming against the Bruins. In those last six championship meetings, the rivals have won three titles apiece. UCLA claimed crowns over USC in 2014, 2015 and 2017, while the Trojans beat the Bruins to win it all in 2009, 2011 and 2012 during USC’s stretch of now-16 consecutive NCAA appearances.

In today’s semifinal bout with Cal, it was a tight battle throughout until the Trojans made their power surge in the fourth. The score was tied five times in the first half, with neither team leading by more than a single goal in that span, which saw a 5-5 snarl at halftime. USC’s Jake Ehrhardt and Carson Kranz each had plugged in two goals during the first half, following Chris Agliozzo’s opener for the Trojan cause.

Right out of the gates in the third, Ehrhardt pulled off a ridiculous finish in front of the cage to nudge USC ahead 6-5. But Cal would piece together three straight scores to steal back the lead, going up 8-6. Kranz completed his hat trick with a zinger on a USC 6-on-5, and it was an 8-7 Cal lead entering the fourth. The Bears knocked in the first goal of the final frame to take back a two-goal lead, only to see the Trojans buckle back in. Ehrhardt, Marcus Longton and Wyatt Barker each rattled the back of the cage with even blasts to take back the lead, up 10-9 with 4:46 on the clock. Another laser from Longton lifted USC up 11-9 with 2:51 to go, while USC goalie Nic Porter remained in lockdown mode. Three straight saves from Porter snuffed Cal’s hopes, while his save count  climbed to 13 on the day. Barker sent in USC’s 12th goal soon after, making it 12-9 Trojans with 37 seconds left. Cal would get one last goal to go, but with 20 ticks remaining USC was more than able to hold on for the  final 12-10 win, securing its spot in the NCAA championship game.

In 35 NCAA appearances in program history, USC has now made it to 23 NCAA finals as the Trojans look to claim their 11th men’s national championship and the first under second-year head coach Marko Pintaric.