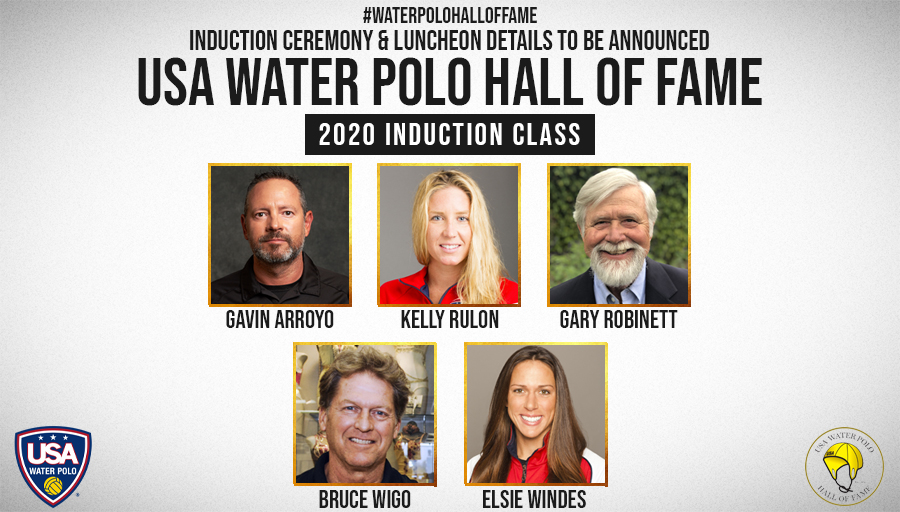 Congratulations to all the inductees!

Gavin Arroyo
Now well established as one of the premier water polo coaches in the country—at Long Beach State and with the USA Water Polo Men’s National Team—Gavin Arroyo first made his name in the water. One of the best aquatic athletes to come out of southern California in the 1990s, Arroyo was named swimmer of the year and water polo player of the year as a senior at Villa Park High School. From there it was off to the University of California, Berkeley, where Arroyo immediately helped the water polo team win three straight NCAA Championships including an undefeated campaign in 1992. At the same time, he began carving out an important role on a veteran USA Men’s Senior National Team and made his Olympic debut at the 1996 Games in Atlanta. The next year Arroyo helped the United States to a Gold medal finish at the FINA World Cup—the second World Cup crown of the decade for Team USA. Arroyo capped an eight-year run with the U.S. with a second-straight Olympic Games appearance in 2000 in Sydney. While starring for Team USA, Arroyo was one of the first American athletes to become a mainstay abroad, enjoying a seven-year career in Greece and Spain competing for Vouliagmeni, Glyfada, CN Barcelona, Olympiakos, and CN Barceloneta. Arroyo remains entrenched in water polo as a high-level coach, now in his 14th season leading Long Beach State and having won MPSF Coach of the Year honors on three occasions. Currently the acting ODP technical director, having helped implement fundamental development frameworks for more than 20 years, Arroyo also has been in charge of the Men’s Development and Junior National Teams the last five years.

Gary Robinett
A former water polo player at the high school, junior college and Division 1 college levels, Gary Robinett turned to coaching age group and the high school levels before he found his calling in the water polo world as a referee.  A high-level water polo official for more than 25 years, Robinett whistled at high-level international, collegiate, high school, and age-group competitions. An administrator at the 1984 and 1996 Olympic Games handling field operations, Robinett wore the whites at the FINA World Cup and Olympic Qualification Tournament in a career that spanned more than 85 international matches. A familiar face in domestic water polo, Robinett worked 23 NCAA Men’s and Women’s Championships, including 10 title bouts alongside three U.S. Olympic Festivals and eight Junior Olympics championships. An advocate for referee growth and enrichment when Robinett wasn’t refereeing a game himself, he helped others improve their craft serving as an instructional chair for SCAF and OCSCAF and the supervisor of officials for the MPSF.  A teacher for over 40 years at Valencia High School in Placentia, California, Robinett remains involved in the sport as a member of SCAF, officiating girls high school water polo, and most recently joining the American Water Polo Collections committee.

Kelly Rulon
Kelly Rulon arrived on the world water polo stage as a teenager joining the USA Senior National Team during her freshman year at UCLA. The 19-year old Rulon arrived in Athens, Greece, for the 2004 Olympic Games on the heels of helping UCLA win the 2003 NCAA Championships, the first of four she would earn. In 2004, Rulon and Team USA battled back from a heartbreaking semifinal loss to claim Bronze in just the second Olympic Games to offer women’s water polo. The following year Rulon was a medal winner again, taking Silver at the FINA World Championships while adding another collegiate title with UCLA. She stepped away from the National Team in 2006, but not from water polo; she soon became one of the most dominant players in the game. In 2007 Rulon capped her star-studded career in Westwood with another title and Cutino Award honors as the best player in the college game. She was the first Bruin to win four NCAA team titles and holds the record for most goals scored. Rulon embarked on an international club career in Italy that saw Len Cup, Italian league titles, and being named the best international water polo player in the world in 2010. The year before she was lured back to the National Team ranks by her former collegiate coach Adam Krikorian, and the two picked up where they left off, claiming Gold at the FINA World Championships. After World Cup and Pan American Games crowns, Rulon found redemption from Athens with Olympic gold in 2012 in London. She’s remained involved in the sport coaching age-group water polo with Corona del Mar Aquatics in southern California.

Bruce Wigo
Bruce Wigo’s involvement and impact on water polo in the United States is so extensive it’s hard to summarize. Stretching more than 50 years and involving a countless number of projects and initiatives, Wigo simply was all about pushing water polo forward. Introduced to the sport in the late 1960s at the Philadelphia Athletic Club by USAWP Hall of Famer Paul Barren, Wigo competed in AAU water polo before swimming took priority in his college years. He circled back to the sport in the 1970s, first as a coach for the U.S. Virgin Islands and then with the New York Athletic Club’s Saturday morning youth program, where his son Wolf was introduced to the sport. He served as Zone 1 chairman and was a collegiate referee before taking on the role of interim executive director of USA Water Polo in 1991, an assignment that would last more than 12 years. In that time, working with a dedicated corps of volunteers, Wigo delivered on multiple fronts. He played a key part in securing a new training facility in Los Alamitos, boosting membership and installing coaching staffs for the Men’s and Women’s National Teams that set the stage success for years to come. Back on the domestic scene Wigo helped track down new sponsors for the organization, increased youth participation in conjunction with the YMCA, opened the Junior Olympics to all comers, and developed a variety of much-needed coaching materials. Wigo assisted in the production of videos and other promotional materials in an effort to bring women’s water polo to the Olympic Games, a feat achieved at the 2000 Games in Sydney while also placing a premium on the health of men’s college water polo and growth of the women’s game. He hasn’t strayed far from the sport or the aquatics world, serving as CEO of the International Swimming Hall of Fame for a dozen years and more recently working as a consultant to various aquatic-related organizations and museums.

Elsie Windes
In a sport long dominated by California athletes, Elsie Windes put Oregon women’s water polo on the map at the Olympic level. Hailing from Portland, Elsie followed in the water polo footsteps of her father Doug and sister Lucy. She was a standout player in the age-group ranks in Oregon, claiming a high school championship at Beaverton while competing on the club scene with Tualatin Hills. Discovered by USA Water Polo National Team staff during a 1997 clinic, she went on to become a three-time All-American selection at the University of California, Berkeley, and more recently a Cal Hall of Fame inductee. Elsie joined the national team in 2006 with her sights set on the Olympic Games. An integral piece of Team USA’s staunch defense, Elsie immediately made an impact helping the red, white, and blue to an undefeated 2007 campaign, which included a FINA World Championship. Windes made her Olympic debut in 2008 as Team USA claimed Silver in Beijing before adding another World Championship title the following summer in Rome. The wins continued as Windes was part of Team USA’s first FINA World Cup title in over 30 years with a Gold medal in New Zealand in the summer of 2010. Windes’ Team USA career culminated in London in 2012 as the United States earned Gold for the first time in program history. Now a wife and mother of three, Windes was recently back in the pool for a scrimmage with her sister’s water polo club, bringing her water polo journey full circle.

About USA Water Polo
USA Water Polo, Inc., is the national governing body for water polo in America, overseeing our United States Olympic program as well as 20 championship events annually, such as Junior Olympics and Masters National Championships. With more than 50,000 members, USAWP also is the sanctioning authority for more than 500 member clubs and more than 400 tournaments nationwide. USAWP is committed to the development of the sport throughout the U.S., fostering grass-roots expansion of the sport and providing a national system of affiliated clubs, certified coaches, and officials.