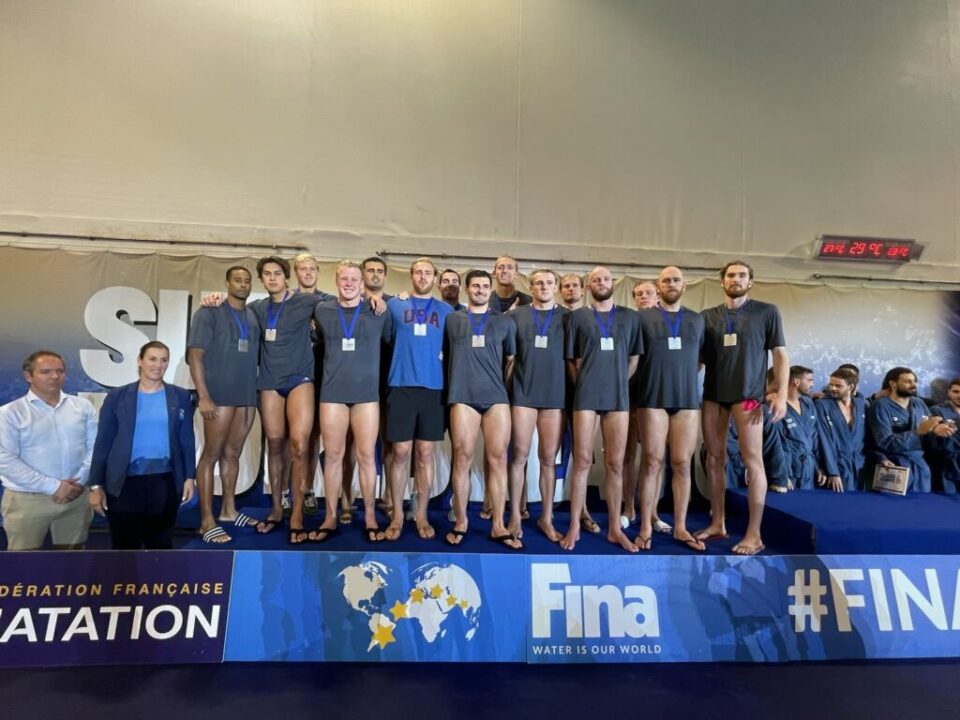 The American men won silver in the Super Final for the second straight year, falling by a score of 13-9 to the Italians. Current photo via USA Water Polo

Strasbourg, France – July 27 – For the second straight year and fourth time in program history, the USA Men’s National Team won silver at the FINA World League Super Final. The latest podium performance came earlier today in France following a 13-9 loss to Italy in the final. The loss snapped a four-game win streak for Team USA as they finish play in Strasbourg at 4-2. Alex Bowen scored four goals to lead the offense while Jack Turner and Adrian Weinberg split time in cage collecting 14 saves. A full replay of the match is available by clicking here.

Team USA and Italy met for the fifth time since July 12 and just days removed from the USA Men defeating Italy 13-9 to finish group play. After the Italians opened the match with the first goal it was Bowen and Ben Hallock answering to give Team USA a 2-1 lead after eight minutes. The teams traded goals in the second quarter as Hallock scored on a power play to build a 3-2 lead with 2:37 left in the half. Italy answered with two straight goals but Jake Ehrhardt had the final word on lob shot score with just :19 left in the half for a 4-4 match at intermission.

Italy took command in the third quarter, outscoring Team USA 6-1. Italy ran off three straight goals to open the period taking a 7-4 edge less than two minutes into the quarter. After Hannes Daube scored to stop the run, Italy went right back on the attack scoring three straight over the final 4:22 of the period to take a 10-5 lead. Three goals came from Luca Damonte in that period, one of three Italians to score three goals in the match joining Edoardo Di Somma and Giacoma Cannella.

The onslaught continued in the fourth quarter as Italy opened the frame with two more to go in front 12-5 with 5:56 to play in the match. Team USA looked to stage an epic rally as Dylan Woodhead scored, followed by three consecutive goals from Bowen for a 12-9 match with 1:38 left. From there the United States ran out of time, unable to find the goal again. Italy secured the outcome with a final power play strike with :38 left to take the gold at 13-9.