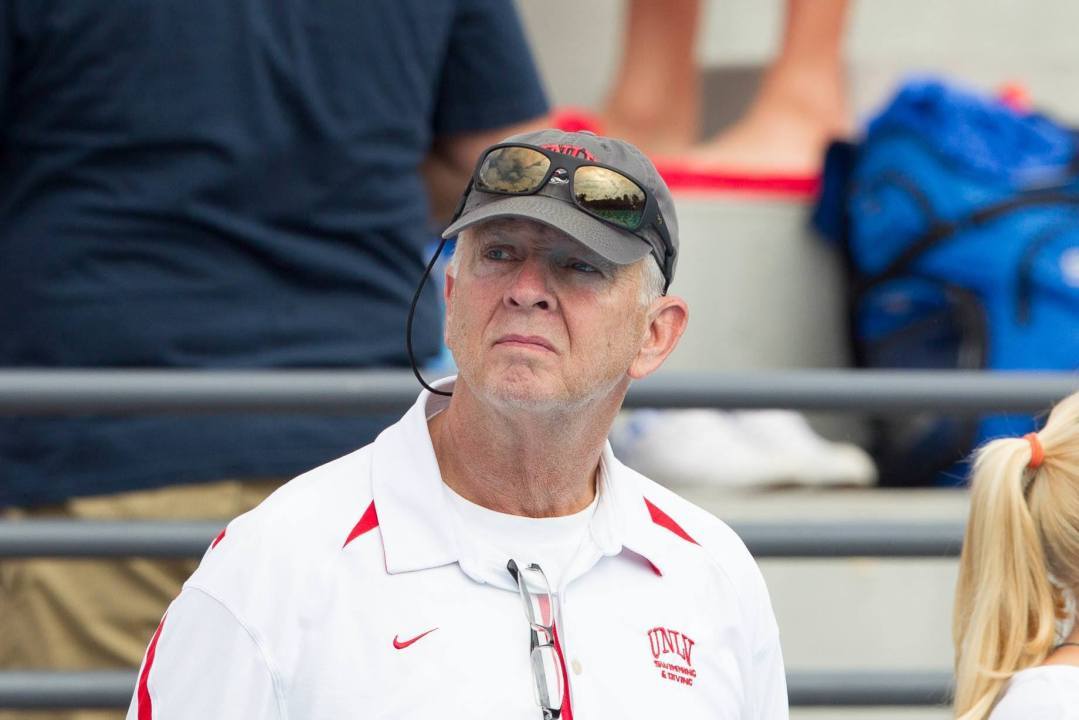 UNLV head men’s and women’s swimming & diving coach Jim Reitz announced his retirement on Tuesday in a meeting with members of his team, ending a 35-year tenure that is one of the longest in NCAA Division I swimming.

Reitz has built somewhat of a mid-major dynasty with the UNLV men, who have won 10 out of their last 11 conference championships between the MWC, the WAC,  and the MPSF, and have scored at 5 out of the last 6 NCAA Championship meets (including tying for 26th in 2015). The team has scored at NCAA’s a total of 16 times, including a high of 19th place in both 2011 and 2014.

“Without a doubt we are losing not only an outstanding coach, but also an icon with Jim Reitz’s retirement,” said UNLV Director of Athletics Tina Kunzer-Murphy. “Jim has built our swim program almost from the ground floor into one of the top programs on the West Coast, and the entire Rebel family will always appreciate the accomplishments and the outstanding student-athletes that came through the program in his time as our head coach.”

His women’s team has had success too, having scored at the NCAA Championships 9 times, including a high of 24th in 1986.

Reitz has a total of 15 conference Coach of the year honors on his resume. Prior to coming to UNLV, he was a club coach for 15 years, including as the coach of the Cascade Swim Club and the Seattle Swim Club.

“UNLV was my first and only collegiate coaching position and I just felt that now was the right time to retire,” said Reitz. “I truly enjoyed my run here and working with these kids over the years. I will always cherish my time at UNLV as I’ve seen it turn into a premier academic institution over the years. I will miss watching the kids grow in the program as that is really the best part of coaching.”

“I am thankful to numerous people during my career here and wish the program the very best for continued success in the future. I greatly appreciate the ongoing support and leadership of our Athletic Director, Tina Kunzer-Murphy, and also Brad Rothermel, who gave me a chance 35 years ago to be the head coach.”

A native of Seattle, Wash., Reitz coached 15 years before coming to UNLV. He coached at both Cascade and Seattle Swim clubs and was head of the physical education departments at Shorewood High School in Seattle. He moved to Las Vegas in 1976 and began coaching the Sandpiper Swim Team before taking over the reigns of the Rebel programs four years later.

Coward. It’s easy to be publically critical when you don’t leave your name.

Congrats on the amazing run Jim! Thanks for being a great coach, extraordinary person, and amazing leader! The true rebels will miss you!

A great man that taught me a lot about swimming and even more about life.