UNC Men and Women Defeat Louisville Over The Weekend 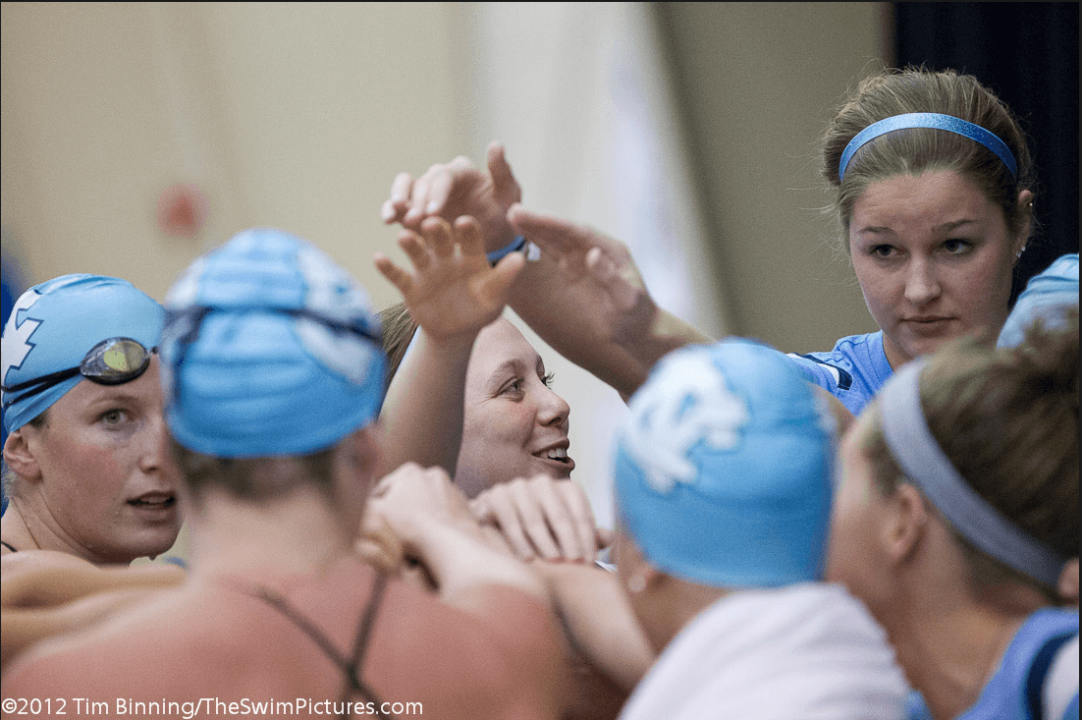 After day 1 of the UNC Tar Heels dual meet vs the Louisville Cardinals, the Tar Heels were leading 100-67... Stock photo via Tim Binning/TheSwimPictures.com

After day 1 of the UNC Tar Heels dual meet vs the Louisville Cardinals, the Tar Heels were leading 100-67 for the women and 83-81 for the men.

The North Carolina women only won half of the events on the second day, but their depth carried them through to a commanding victory over the cardinals. They started day two with a second place in the 200 medley relay. Louisville’s relay team of Krissie Brandenburg, Andee Cottrell, Kelsi Worrell, and Breann McDowell touched out the Tar Heels by .31 to win the event with a time of 1:42.35.

Stephanie Peacock added the first won of the day for North Carolina, posting the second fastest time in the country in the 1000 freestyle. Peacock touched the wall at 9:38.51, which is only .02 behind the fastest time in the nation this season, which is currently held by Florida’s Elizabeth Beisel. Emma Nunn, Peacock’s teammate, finished second with a 9:59.39 and Louisville’s Abbie Houck was third with a time of 10:12.67.

In the women’s 200 breaststroke, Katherine Rechsteiner added another win for North Carolina, swimming to a time of 2:16.71. Abby Fisher was second with a 2:19.25 and Louisville’s Gisselle Kohoyda was third at 2:19.51.

Despite North Carolina’s talented group of butterflies, Louisville finished first and second in the 100 butterfly. Kelsi Worrell and Tanja Kylliainen touched the wall at 53.70 and 54.50.

North Carolina’s relay team of Allyn Hardesty, Danielle Siverling, Lauren Earp, and Sarah Koucheki won the final 400 freestyle relay with a time of 3:21.72, ahead of Louisville’s A-relay, who swam to a time of 3:22.50.

Louisville’s Joao De Lucca won the first event of the day for the Cardinals, touching the wall at 20.27. Logan Heck was second at 20.40, and led the Tar Heels to a 2-3-4 finish. Louisville’s Caryle Blondell had an unfortunate slip on the blocks and almost three seconds slower than his split from the 200 medley relay.

Louisville won the final 400 freestyle relay. The team of Caryle Blondell, Joao De Lucca, Trevor Carroll, and Matthias Lindenbauer won with a time of 2:58.62, ahead of UNC’s 2:59.31.

The Tar Heels were ahead by two points after the first day, and slightly extended their lead to 25 points to win the meet on the second.