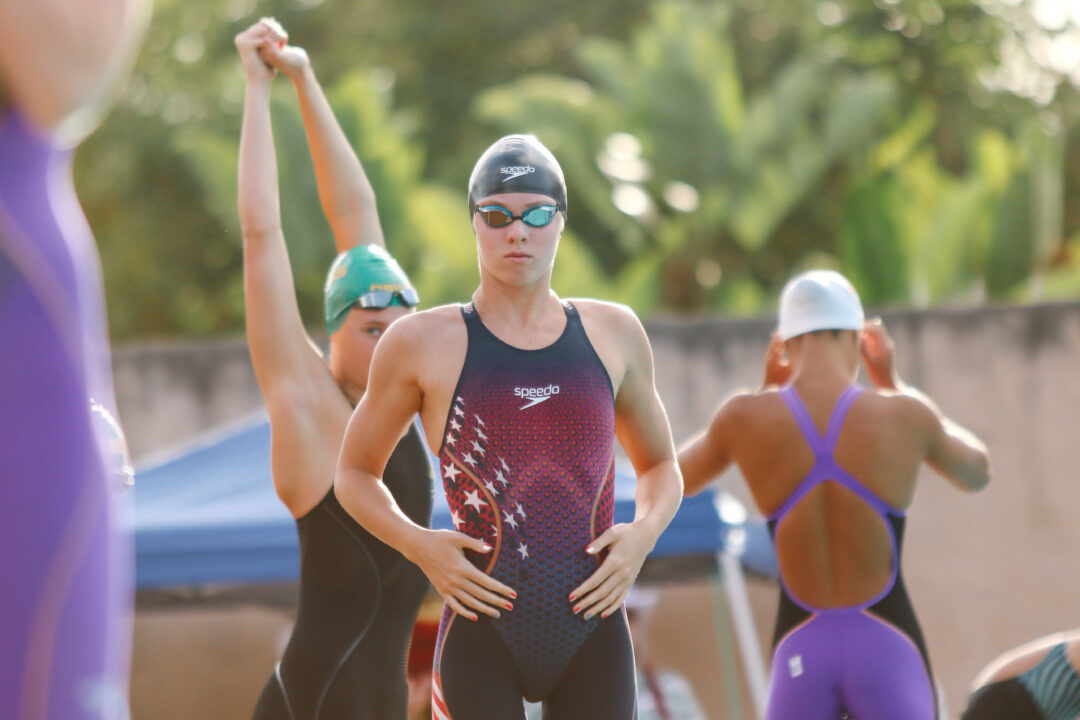 Gemmell had a monstrous showing at the Junior Pan Pacific Championships in late August, piling up six gold and seven total medals in Honolulu. Current photo via Jon Reiter

After narrowly missing qualifying for the World Championship team earlier this year, Erin Gemmell has taken a massive leap forward this summer and it all cumulated with a six gold, seven medal performance at the Junior Pan Pacific Championships in Honolulu.

Gemmell, 17, finished seventh in the women’s 200 freestyle at the U.S. International Team Trials back in April, three-tenths outside of a berth at the World Championships, but has responded with some big-time swims over the past month-plus.

First came the U.S. Summer National Championships in late July, where the Nation’s Capital Swim Club product won the women’s 400 free in a lifetime best of 4:06.17, and also recorded her fastest-ever time in the 200 free (1:56.14) to place second to Katie Ledecky.

Gemmell was also a clutch relay performer in Honolulu. Not only did she post the fastest split in the field on the record-setting U.S. 400 free relay (54.29) and the quickest free leg on the 400 medley relay (53.73), but she also dropped a scintillating 1:54.86 anchor on the 800 free relay to erase a three-second deficit to Australia and win gold for the Americans.

At the conclusion of the competition, Gemmell’s name is now on six different Junior Pan Pac Championship Records, having lowered the standard in all of her gold medal victories.

The greatest success of Erin Gemmell this season was certainly the improvement of her sprinting abilities. She bettered her personal best in 100Fr by more than 1.4 sec. The 54sec is still too far from being in contention internationally when swimmers swim 51sec but it is not far away from the times required to be on American relay team.
And as a consequence her impressive results in 200FR made people talk about her a lot. It’s not a joke to have a swimmer who splits 1:54. But there is some caveat about this her race. It was not actually swum faster than her individual race. She was there still a 1:56 swimmer and relay start made such a noticeable… Read more »

Where issue going to college?