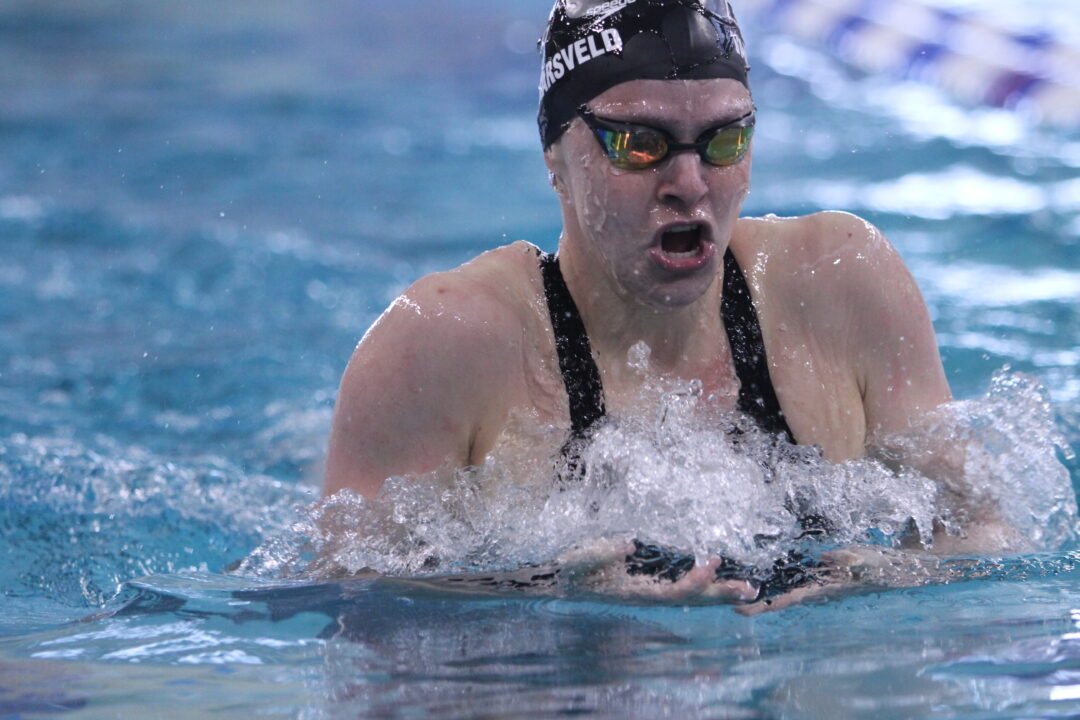 Over the weekend, UIndy swimmers broke three school records. The team as a whole also defeated Butler and Findlay in a tri-meet. Stock photo via UIndy Athletics

INDIANAPOLIS – Yesterday against McKendree, Liki Prema of the University of Indianapolis men’s swimming & diving team broke the school record in the 200 breast at 1:57.95. However, today against Findlay, Prema passed that mark and produced an even stronger time at 1:57.49, earning him a B-standard and a first-place finish in the race.

The records didn’t stop there, as Alexis Lumaj of the women’s program set the new school record over in the diving in the 3 meter-6 dives at 311.40. This won her the event and slides her by the previous record set by Cassie Kury of 277.05 in 2020.

Finally, Cade Hammond is now the new school record holder in the 1 meter-6 dives for the men’s squad after his 415.65 final score today. Not only did Hammond win the event, he breaks the previous mark of 375.82 set by Payton Staman in 2020.

Prema, Lumaj, and Hammond were just a few individuals in a giant team effort which saw both swimming & diving programs dominate yet again in the pool. On the women’s side, the Greyhounds dropped Findlay 206-91 and Butler 226-61. The men took down Findlay 195-90.

Once again, both relays were won by the No. 1 Greyhounds. The 400 MR, featuring the quartet of McCoy, Simioni, Van Jaarsveld, and Johanna Buys, touched the wall over the competing field at 3:47.20. In the final event of the afternoon, the 400 FR of Buys, van Jaarsveld, Schreuders, and Caylor corralled a winning time of 3:25.36.

HOUND BYTES
Final thoughts on the day from head coach Jason Hite…
“It was another good meet for us, especially seeing three school records be broken. We’re looking forward to the House of Champions meet and making some cuts for nationals.”

UP NEXT
The Greyhounds return to the pool on Nov. 18-20 for the House of Champions meet beginning at 10 a.m.

INDIANAPOLIS – The Butler swim team was in action over the weekend competing against both UIndy and Findlay in a meet hosted by the Greyhounds. The Bulldogs will continue to train this week in preparation for the three-day House of Champions meet coming up on Thursday, Nov. 18 at IUPUI.

Head Coach Maurice Stewart tabbed Cami McGrady as the “Swimmer of the Meet”. She posted a season-best time in the 200 Free and also competed at a high level for BU in the 100 Breast, 100 Fly and 400 Free Relay.

One of the best performances from Saturday belonged to Alani Hightower-Bend. She placed second overall in the 200 Back with a time of 2:08.41. It was her first time competing in this event and she still posted a BIG EAST qualifying time! Sophia Guyer (2:17.40) and Abby Hobrough(2:23.23) were also in action during this event. Guyer placed fifth and Hobrough ended in seventh.

In the 400 medley relay, Findlay picked up a win against Butler, third place against Indy, as Sasha Melnyk, Kristina Coleman, Edith Somrah, and Sydney Jones teamed up to finish the event in a time of 3:58.49. Jones later picked up a win over Butler in the 50 free with a time of 24.58, but finished third overall. She was again active in the 100 free, finishing fourth overall, but first against Butler with a 53.91.

The Oilers next win came in the 1000 freestyle as freshman Abbie Kmet swam every one of her 20 laps in less than 35 seconds to compete the race in 11:13.16. The time gave her a win against Butler, but runner-up against UIndy.

After a solid day yesterday in Cleveland, sophomore Cecilia Langle continued her momentum with a first place finish in the 200 freestyle with a time of 1:53.34. She trailed for the first three laps of the race but outswam Indy’s top finisher by almost eight-tenths of a second in the final lap to pick up the victory. She later swam in the 500 freestyle and took third overall but first against the Bulldogs, touching the wall in 5:21.80.

In the 100 backstroke, freshman Mille Berg was the runner-up with a 58.12, but did earn the win against Butler. Melnyk was close behind with a 59.47.

Colman was back in the pool for the 100 breaststroke where she finished first against Butler with a time of 1:07.38, finishing fifth overall. In the 200 breaststroke, junior Rachel Poling had a 2:30.91, defeating Butler but finishing second to UIndy.

Sophomore Jessie Schelin swam a 2:14.11 in the 200 yard butterfly to finish runner-up overall, but earning a victory against the Bulldogs. She finished third in the 100 butterfly, as well, but first against Butler, ending the race in 59.78.

In the diving pool, Findlay’s Addi Fleischman was the winner, scoring a 261.82 in the one-meter dive. She also competed in the three-meter competition and took second with a 253.27.

The final event of the night was the 400 freestyler relay. Findlay’s women took third against UIndy, but defeated Butler as the team of Jones, Langle, Melnyk, and Macy May finished in 3:37.44.

The Oilers picked up a victory in the 200 butterfly as sophomore Adam Hornak out touched his competition, finishing in 1:53.03, a half second ahead of the runner-up.

Freshman Angel Margaritov earned another win for the Oilers in the 100 free. His first lap of 22.33 was the fastest in the race as he finished in 46.22.

Sophomore Daniel Garcia earned the third and final win for the Oilers, picking up a victory in the 200 yard IM with a 1:55.16.

In the 1000 yard freestyle, Rafael Lozano Machado finished second with a 9:46.46, the eighth-best time in Great Midwest history while Daniel Garcia and Luca Chiandussi tied for third in the 100 yard breaststroke with times of 55.89, seventh-best in G-MAC history.