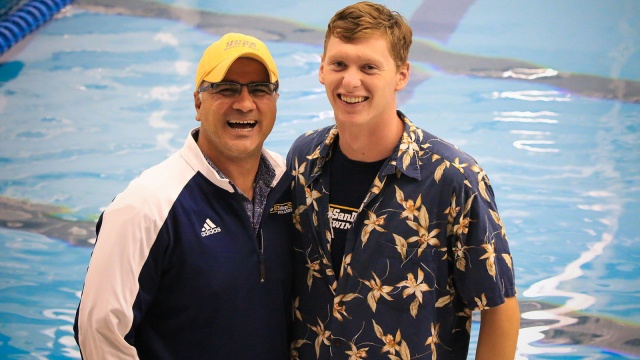 Marko Djordjevic has been elevated to the position of associate head coach of the University of California San Diego men's and women's swimming and diving programs. Current photo via UC San Diego Athletics

LA JOLLA, Calif. – Marko Djordjevic has been elevated to the position of associate head coach of the University of California San Diego men’s and women’s swimming and diving programs. David Marsh, who is approaching his second season as the UC San Diego head coach, made the announcement Thursday.

Djordjevic will be in his sixth year altogether on the La Jolla campus in 2018-19, having started as a volunteer in 2013 before moving directly into the role of top assistant coach in July of 2014. He added recruiting coordinator responsibilities ahead of Marsh’s initial 2017-18 campaign.

“Marko has had a huge impact on UC San Diego over the last five years,” said Marsh. “He’s made the most moving from volunteer, to assistant coach, and now associate head coach. I’m very proud to be in partnership with Marko as we move the Triton program forward.”

“I am both excited and humbled to continue my journey with the UC San Diego men’s and women’s swimming and diving programs as the associate head coach,” remarked Djordjevic. “It has been a dream of mine to lead our program together under the mentorship of Coach Marsh, and there is no better place to do so than at a school that has so much to offer.

“I want to thank David Marsh and Athletics Director Earl Edwards for this opportunity. I’m looking forward to building upon the rich tradition here by recruiting student-athletes of high character who embody the mission of UC San Diego, both academically and athletically. I can’t wait to see us compete in our new conference, the MPSF, and move the Tritons to Division I.”

With Djordjevic on the Canyonview Aquatic Center pool deck, the Triton men and women both won each of the past five Pacific Collegiate Swimming and Diving Conference (PCSC) championships. UC San Diego announced just last week that it had joined the Mountain Pacific Sports Federation (MPSF), made up entirely of NCAA Division I opposition, effective immediately for this coming fall. The Tritons themselves will move to Division I following two more years at the Division II level.

Djordjevic has prior coaching experience at San Diego club programs North Coast Aquatics and Pacific Swim, as well as having held numerous posts at the international level, primarily for his native country of Serbia.

UC San Diego begins its first season as an MPSF member this October, with its full 2018-19 competition schedule slated for release in the coming weeks. The swim portion of the 2019 MPSF Championships, featuring eight women’s teams and six men’s, will take place at East Los Angeles College in Monterey Park, Feb. 20-23, with the diving taking place Feb. 21-23 at the Rose Bowl Aquatics Center in Pasadena.