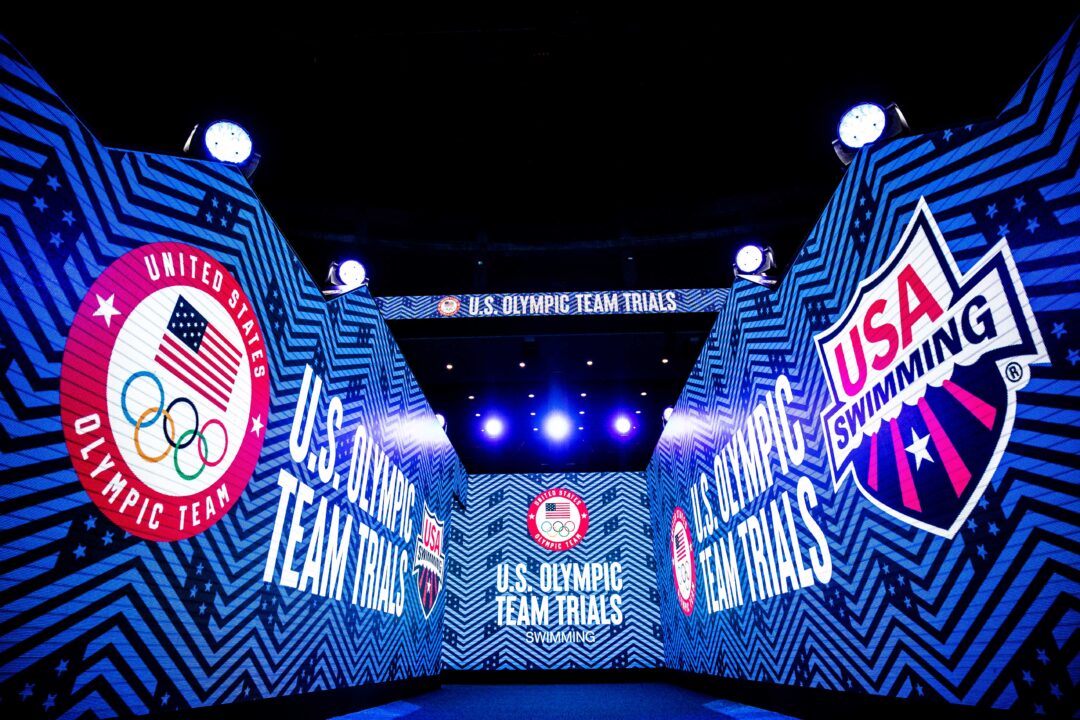 The nine-day event will be staged on a football field, Lucas Oil Stadium, as the Trials move out of Omaha for the first time since 2004. Stock photo via Jack Spitser/Spitser Photography

The IndyStar first reported that the city was set to win the bid for Trials a few days ago.

For the first time ever, the event will be staged on a football field, Lucas Oil Stadium, home of the NFL’s Indianapolis Colts.

The last four Olympic Trials meets have been hosted at the CHI Health Center in Omaha, Nebraska, with Indianapolis last hosting the competition in 2000. In 2004, the meet took place in Long Beach, California.

“From day one, I truly believed that there was no bigger, more exciting, everything-on-the-line Olympic event in this country than the Swimming Trials and envisioned the heights that we could take it to,” USA Swimming President & CEO Tim Hinchey said.

“Given their track record, we are incredibly confident and excited in Indianapolis’ ability to conduct a technically flawless competition and to stage a world-class event. We are also proud of Indiana Sports Corp’s commitment to partnering with us in giving back to the local community and leaving a legacy far beyond our nine-day meet.”

2024 also marks the 100-year anniversary of Indianapolis hosting the U.S. Olympic Trials for the 1924 Olympic Games, which were also held in Paris (as they will be in two years).

“We are honored to be selected as host to the 2024 U.S. Olympic Team Trials – Swimming,” Indiana Sports Corp President Ryan Vaughn said. “The sports strategy in Indianapolis was built on a foundation of Olympic sports and we look forward to elevating the sport of swimming and Indy’s reputation as the city where champions are crowned through this event.

“This is a tremendous opportunity to engage our community beyond the competition venue and we look forward to providing a top-tier experience to all involved.”

Three temporary pools, two 50-meter and one 25-meter, will be installed over the field in Lucas Oil Stadium, a state-of-the-art multi-purpose sports and entertainment venue that hosted major events such as the Super Bowl, NCAA men’s basketball championship games, and the College Football Playoff National Championship.

USA Swimming’s Aqua Zone will be held at the Indiana Convention Center, which is connected to the stadium.

While a specific attendance capacity/target isn’t noted in USA Swimming’s press release, the IndyStar report indicated the bid would be to have space for 30,000 to 35,000 spectators. Lucas Oil Stadium is listed as having a seating capacity of up to 70,000, though as you can see in the photo above, part of the stadium seating will be blocked off for the warm-up area.

Specific dates for the competition have yet to be confirmed as the International Olympic Committee (IOC) has reportedly not yet locked in when the Olympic qualifying period will end.

When and where will tickets go on sale?

Tickets won’t go on sale until sometime in 2023, so we’ll share that information when it’s available.

i was sooooooooooooooooooooo tired of Omaha!
Outside of the trials swimming, NOTHING to do…..
Thank God we are NOT having to go there again. . . .

So you’re psyched for Indianapolis? Like I get what you’re saying about Omaha, but Indianapolis doesn’t seem much better tbh.

The mere fact that I can use all those OLD AA miles to go somewhere else is a +;
Then, I have the joy of getting an hour BACK when I fly to Dallas from the Eastern Time Zone.
Finally, their BEER has to be better than Omaha lite!

Every night Should have one heat of legends. Phelps vs Lochte 2 IM. Natalie 100 back vs B Hanson 100 breast. Get the Crowd amped. Jake Mitchell vs the clock. Rowdy vs Biondi 100 free. Who says no to this

As someone who worked the trials in ’92, ’96, and ’00, I’m glad the Trials are back in Indy! Wonder how this announcement got back to Dale and Eric being the “Trumps” of swimming? Indy excelled when it hosted the Super Bowl, the entire NCAA tourney, and so many other large athletic events. The history of of swimming in Indy is second to none! For consistency, the roof should not be open for the competition. There’s no way it should be open for one night and closed on another because of changes in weather.

Need other pools to train in while you are here? There are 10+ 50m pools within 30 minute drive of Lucas Oil plus a ton… Read more »

Not a fan of the stadium selection, but Indy is perfect for this type of week-long event. There is no way they will get anywhere near capacity crowds in such a large facility. Hopefully they can put curtains around the upper level and keep it closed… Word of caution on Indy hotels. The JW Marriott, Spring Hill Suites, Fairfield Inn, and Courtyard run a scam with parking. $55 / night that they don’t mention until you check in. Factor the extra $55/day into your price when selecting a hotel. You can save $30/day by parking across the street, but once you enter the Marriott Garage they got you for $55.

will there still be a wave one and a wave two trials? i liked having wave one because it gave the up and coming stars a chance to be recognized on the big stage

Not that has been announced.

@Braden Keith when is USAS going to announce the way they’re gonna pick the team for Fukuoka 23 ?

American Swimmers need to know in advance, so that they can either take July/August off or re-taper for Nationals after Budapest.

Any inside infos or rumors ?

Everything is in so much of a state of flux, my guess is that they haven’t decided anything yet and are still in very much a holding pattern waiting for more shoes to drop.

Is there any word about whether they are bringing back the wave 1/wave 2 schedule?