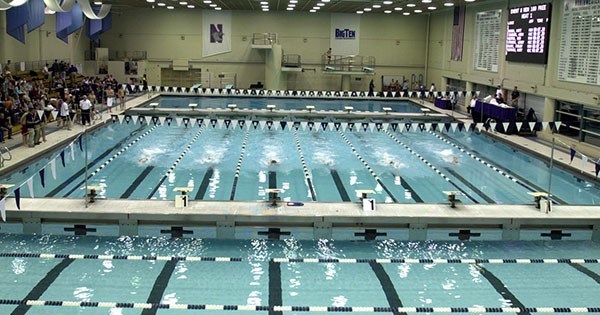 The Northwestern men’s and women’s swimming and diving teams are playing host to Michigan State University, Air Force, the University of Illinois at Chicago, Truman State, and Saint Louis University this weekend with the TYR Invitational and Friday’s opening session saw the Spartans and the Wildcats locked in several tight races, a theme that will be very interesting to watch tonight during finals.

Michigan State raced to the top 2 spots in the women’s 50 breast to lead off the day thanks to Shelby Lacy (28.40) and Kennedy Cutler (29.40), so the Spartans can score some big points unless Northwestern’s Julianne Kurke (29.40) or Katie Branch (29.88) can come up huge in the finals session. On the men’s side, the Spartans and Wildcats comprise the top 6 spots as MSU’s Alec Kandt leads the pack with a prelims-best 25.16. Not far behind is NU senior Uula Auren (25.55) and his freshman teammate Almog Olshtein (25.79). The other swimmer under 26 seconds is MSU freshman Nick Leshok (25.86) so it’s really anyone’s race in finals

Two NCAA B cuts were secured this morning in the women’s 500 free as  NU’s Lauren Abruzzo edged out Air Force’s Genevieve Miller  4:46.84-4:47.33 to take the top spot (B cut is a 4:47.79). Both swimmers entered today with season bests of 4:54’s so it will be another great race to watch. MSU’s Jon Burke posted his career best time in the men’s race (4:26.74) en route to taking the top seed entering finals, though he will have to put together something extra special to hold off NU stud Jordan Wilimovsky who cruised to a 4:28.74 in the morning heats. This is one event where Michigan State can really score a lot of points as they have 4 swimmers in the A final and 5 swimmers in the B final, so Northwestern will need some big time swims from Wilimovsky and Charlie Cole (8th, 4:35.37) to help minimize the damage done.

Perhaps the swim of the morning belongs to Northwestern freshman Mary Warren who went a career-best 22.87 (NCAA B Cut) to become the top seed in the women’s 50 free. She will lead a strong contingent of NU swimmers as they have 5 swimmers in the A final.

Also of importance will be the men’s 200 IM where the top heat is entirely comprised of Northwestern and Michigan State swimmers with Kandt leading the way in a 1:49.71.