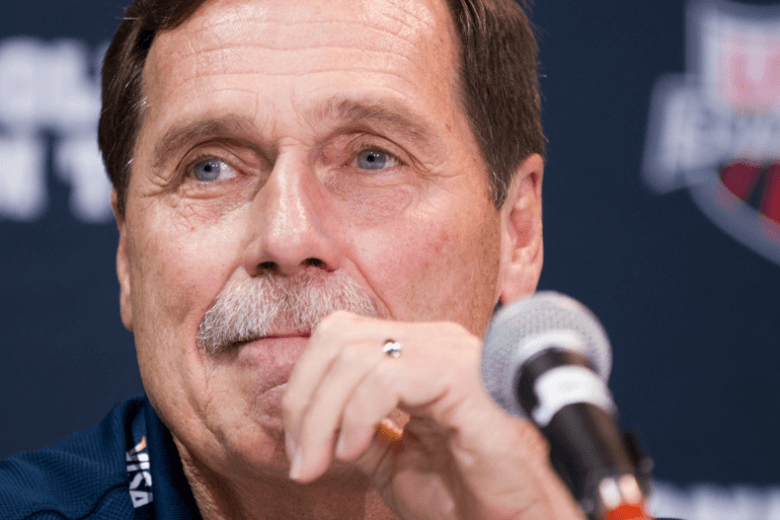 Florida Gators head coach Gregg Troy got a chance to preview his men's and women's teams in his season-opening press conference, especially noting the youth of his teams along with their talented freshman classes. Archive photo via Tim Binning/TheSwimPictures.com

Florida Gators head coach Gregg Troy got a chance to preview his men’s and women’s teams in his season-opening press conference, especially noting the youth of his teams along with their talented freshman classes.

A couple of the freshman Troy pointed out were Theresa Michalak and Caeleb Dressel. Michalak is a German Olympian who joined the team last winter. Troy said she won’t officially be eligible until second semester, but should be around for Florida’s post-season meets. Dressel, meanwhile, was one of the top prospects in the nation, a Florida native who surprised many fans by choosing to stay in-state rather than bolt to a tradition sprint freestyle powerhouse.

One of Dressel’s traits that Troy emphasized was his versatility. “He’s more than just a 50 freestyler,” Troy said. “He can swim a lot of different things real well.”

That seems like a sign that we’ll see Dressel trying out some various events this year, at least during the regular season. The 100 fly and 200 frees seem like good bets, as Dressel has already had plenty of success in those races in his career.

Troy also talks about the big steps up taken by sophomore Mitch D’Arrigo this offseason, plus the tough senior class the Gators graduated on the women’s side. You can view the full interview courtesy of GatorVision by following this link.

“He’s the only top-tier sprinter on our team, so of course we’re going to move him out of the sprints…”

Will be very interested to see how Michalak does in SCY – maybe we will see her at nationals in december?

An interesting move, for sure. I’m really curious about what he’ll be able to do in the 200, though. Given his 1:48 LC time a while back and his ridiculous underwaters, he’s got the whole package. I think he may be a huge contributor on Florida’s 800 free relay.

He certainly could be a great 200 freestyler.
But with D’Arrigo, Werner, Corey Main, Dan Wallace… do they really need another guy who could – maybe – drop a second or two from their 4×200 free relay?

You’re right. Florida needs more 200 freestylers like they need more IMers, but it’ll be nice to see what he can do his freshman year. I think Caeleb realizes that he’s got years and years of specializing in the 50 and 100 freestyles ahead of him, so he’s not too worried about it. I agree, though, that it might not be the best move, from a NCAA championship standpoint. After all, his 18.94 would have won it last year. They might be giving up a good amount of points if he can’t maintain his speed. But it’s a long season and I think they’ll be fine. Maybe they’ll spend the first half of the season working on branching out, and… Read more »