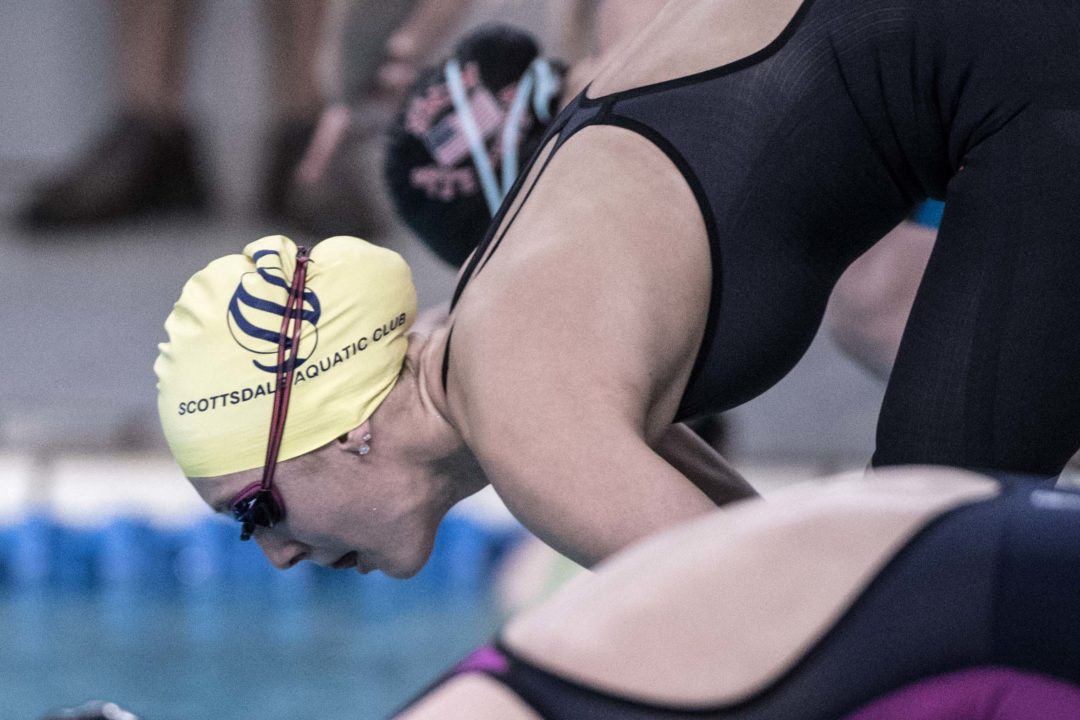 Smack Strap is a unique braided elastic replacement goggle strap which is specifically designed to reduce pressure from goggle straps.

TritonWear and Swim Swam partner to bring you the best in swimming race analysis. With the power of TritonWear, you can access 12+ metrics for all athletes simultaneously, display the results in real-time to unlimited screens on deck, and review later in an easy to use interface for monitoring progress and identifying trends over time. See race analysis from TritonWear here.

The women’s 100m freestyle boasted an impressive lineup of swimmers who raced hard for the win.

Off the blocks, Vander-Wallace led the break out, staying under for 4.19 seconds, with Geer and Ruck not far behind. Geer immediately gained the advantage a couple strokes in and kept this lead throughout the 50. Kayla Sanchez spent the longest time underwater, taking 5.16 seconds before breaking out.

Geer and Ruck were closely tied in the first 50, matching each other stroke per stroke, both keeping pace with the same stroke rate and stroke index  (DPS x Speed). Geer beat Ruck to the turn by 0.18 seconds, but Ruck made up for it with a slightly faster turn time.

Geer maintained her lead off the turn, maximizing her time underwater before taking a powerful first stroke on the final lap. However, as they came into the final 15, Geer’s strokes had begun to drag, along with a significant drop in her DPS – going down from 1.17m to 1.09m. Beside her, Ruck began to catch up. While her stroke rate also dropped, Ruck pulled each stroke at a faster pace than Geer combined with only a 0.04m drop in her DPS.

Ruck’s higher stroke index on the second lap paid off once they reached the flags, putting her in the lead just as they took their final stroke. Ruck beat Geer to the wall by 2 tenths of a second, taking the gold in the 100m freestyle final with a time of 53.51.

Almost a full second later, Sanchez, who had come in fifth on the first lap, finished hard and out touched Vander-Wallace by 4 hundredths of a second for the bronze. While Sanchez had a slower start, her swim took an impressive turn on the second half of the race.

Sanchez had almost even splits, going from 26.97 to 27.74. She clocked in the fastest split on the second 50 after Ruck. Sanchez once again took her time underwater and propelled herself towards a strong comeback, closing the gap as she broke out into the final stretch of the sprint. The DPS for each finalist dropped at a range of 0.02m – 0.07m, with Sanchez falling in the higher end of the range. However, she was the only one to increase her stroke rate after the turn. This, along with her strong underwater kicks on both ends of the wall, made all the difference for Sanchez.

This race demonstrates the impact the proper combination of speed and efficiency of each stroke can have in the outcome of a sprint event. The importance of having a high stroke index is evident – the top 2 finishers having had the highest throughout the race, but upping their stroke rate without compromising form or power gave Ruck and Sanchez the upper hand in the final split seconds that were most critical in the race.

Great analysis. You could really tell how much Sanchez stroke rate was high at the end and how her underwater really helped her the last 50. Most impressive splits imo. If she can get her easy speed improved she could be 53 low.