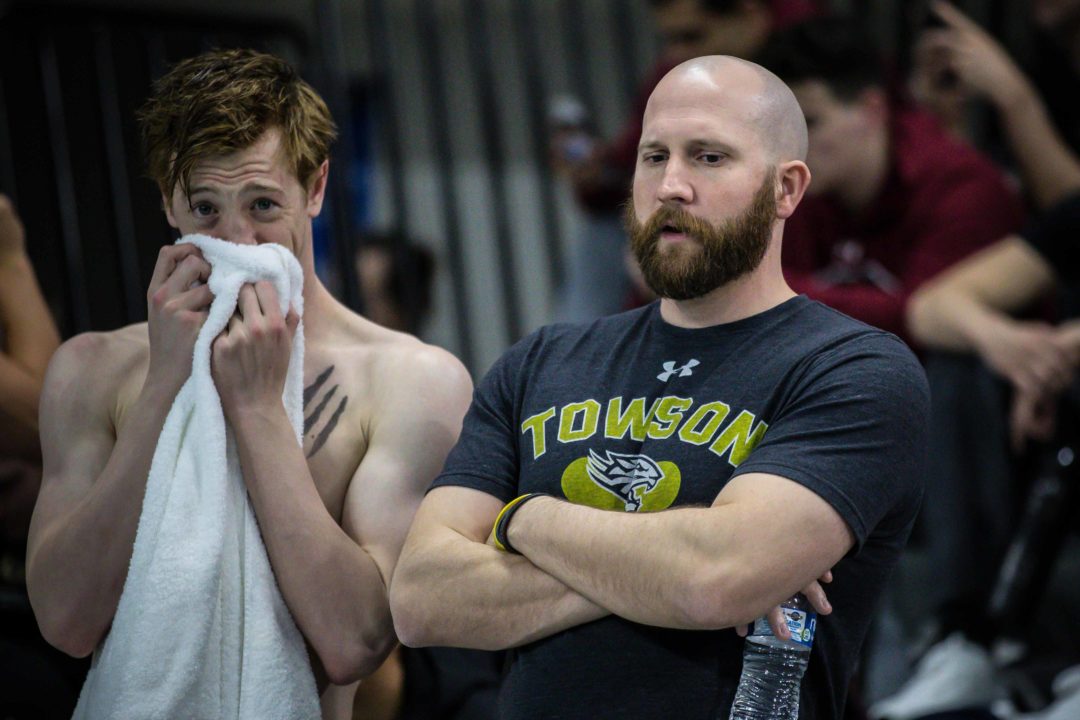 The Towson Tigers won three of the six events on the final night of the 2021 CAA Championships en route to claiming their first CAA championship in team history.

Towson came into Saturday with a 122.5 point lead over UNCW, and kept things rolling right along.

Drexel freshman Will Soleo opened up Saturday’s finals action by winning the 1650 with a time of 15:46.82, touching nearly six seconds ahead of the 2nd place finisher, Delaware’s Bryce Ciecko (15:52.37), who won the 500 free on Thursday.

UNCW’s Will Goldey kept the freshman winning streak alive with a 1:46.70 victory in the 200 back, touching in 1:467.70, just over a second ahead of Delaware freshman Zach Rowe (1:47.95). That completed the backstroke sweep for Goldey after he won the 100 back on Friday.

Freshmen were back in business in the event, the 200 breast. Freshmen Kacper Karnik of Drexel and Brian Benzing of Towson both went out in 25.99, just a tick behind UNCW senior Gianmichael D’Alessandro‘s 25.94, but Karnik steadily pulled ahead the rest of way, getting the win with a 1:57.61. Benzing, who won the 100 breast on Friday, took 2nd in 1:58.38.

Benzing was named Most Outstanding Swimmer of the championships, after taking 2nd in the 200 IM by just 0.05s, winning the 100 breast with a CAA record, and taking 2nd in the 200 breast. Towson’s head coach Jake Shrum was named the CAA Men’s Coach of the Year. Towson’s win snapped a six-year win streak by the W&M Tribe, who fell to 4th place after a particularly tumultuous season where the team was initially slated to be cut, then finally fully reinstated.

Congrats to UVA Swimming Alum Coach Jake Shrum and the Towson S&D Team! Doc is looking down from heaven and smiling with that wonderful twinkle in his eyes.

Towson tapered incredibly well with a bunch of guys making big drops from in-season times, congratulations to their guys on all the hard work paying off and props to their coach for a fantastic taper