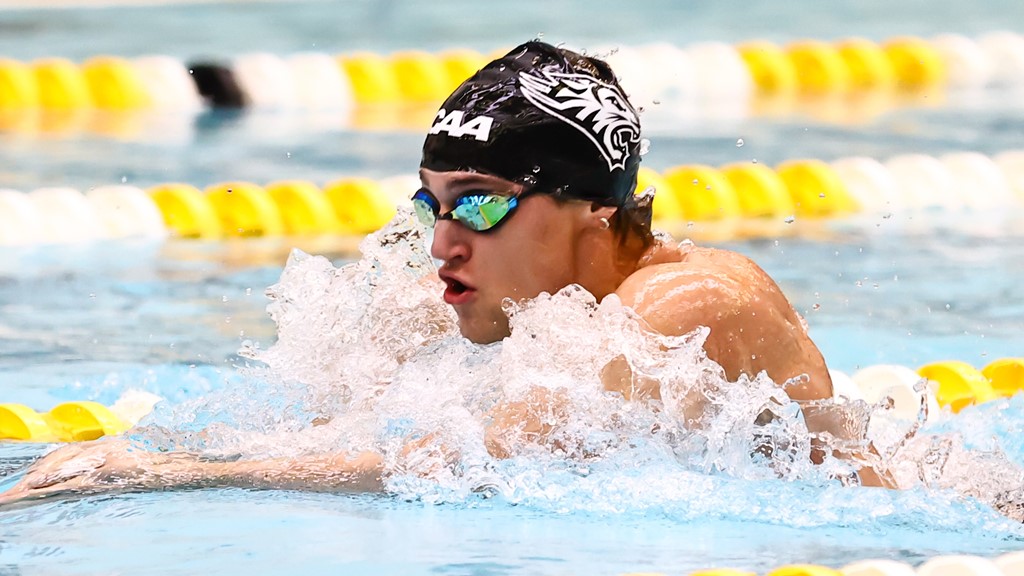 Towson University took a short trip down the road to dual with fellow Baltimore Division I program Loyola on Wednesday. The two programs split the meet, with Loyola winning the men’s meet 168-123 and Towson winning the women’s meet 179-120.

The victorious Loyola Greyhounds were led by freshman Patrick Hayburn, who swept the backstroke races on Wednesday. In the 100 back, Hayburn flipped first at the 50 mark and never looked back, touching in 50.04 for the win by 8 tenths over Towson’s Evan Bota. Hayburn returned to win the 200 back as well in 1:52.06, a new lifetime best and a half second ahead of senior teammate Casey Brown. The Bowie, Maryland native’s lifetime and season best in the 100 back sits at 49.71, from the Thomas Murphy Invitational.

Loyola also impressed in the distance events, where they posted 1-2-3 finishes in both the 1000 and 500 free. In the 1000, junior Dylan Champagne cruised to victory in 9:43.08, four seconds ahead of freshman teammate Alex Plavoukos, while freshman Jonah Goodman touched in third in 9:52.64. The trio returned again for the 500, though it was the freshman Plavoukos who came out on top, a come from behind win in 4:42.35. Champagne finished just behind in second in 4:42.64, while Goodman finished in third with a 4:44.82.

Towson was led by sophomore Brian Benzing, who won both of his individual events on Wednesday. The Ellicott City, Maryland native started his day by winning the 100 breast in a dominating 54.34, winning by over three and a half seconds. He later returned to win the 100 by a quarter second, touching in 49.24. Benzing’s season best in the 100 breast stands at 53.07, while his 100 fly season best is 48.28. Both swims came at November’s Bucknell Invitational.

The women’s meet had the opposite result of the men’s meet, with the Towson coming out victorious over the Greyhounds.

The Tiger women were led by junior Parker Schulz, who won both of her individual events. In the 200 free, Schulz touched first in 1:57.69 thanks to a field-best 29.44 split on the final 50. She outsplit runner-up teammate Victoria Dichak, who touched in 1:57.93, by a full second on the final 50 to take the victory. The North Wales, Pennsylvania native later returned in the 200 back, winning again in a new lifetime best of 2:07.72. Schulz flipped in second at the halfway point to Loyola’s Lauren Joyce, but used another strong back half to take victory. Schulz’ season best sits at 1:53.32 in the 200 free from the Bucknell Invitational.

Towson junior diver Alyssa Largay also won both of her events, sweeping the 1 and 3 meter diving. In the 1 meter, the Paradise Valley, Arizona native posted a score of 284.39 to win by nearly 30 points. Largay also won the 3 meter handily with a score of 289.20, winning by over 25 points.

Despite the loss, Loyola had two swimmers win both of their individual events on Wednesday. Sophomore Lily Mead took the win in the 50 free, posting a 24.28, off of her season best of 22.99. The Timonium, Maryland native also dominated the 200 breast by over five seconds, posting a 2:24.65 for the win. Mead’s season best sits at 2:22.95 from Loyola’s dual with American University.

Also winning two events for the Greyhounds was freshman Laura Latham. The Chelmsford, Massachusetts native used a quick opening 50 to take the 100 fly in 58.14, touching just .02 ahead of classmate Kaitlin Witkop. Latham also won the 200 IM in 2:11.00, using a quick backstroke leg to take the lead and never looking back. Latham’s season and personal best in the 100 fly sits at 56.64, while her season and personal best in the 200 IM clocks in at 2:06.80. Both of those swims came at the H2ounds Invitational in December.

Loyola returns to action next Saturday against Mount St. Mary’s for their final dual of the season, while Towson will travel to Drexel on Saturday.