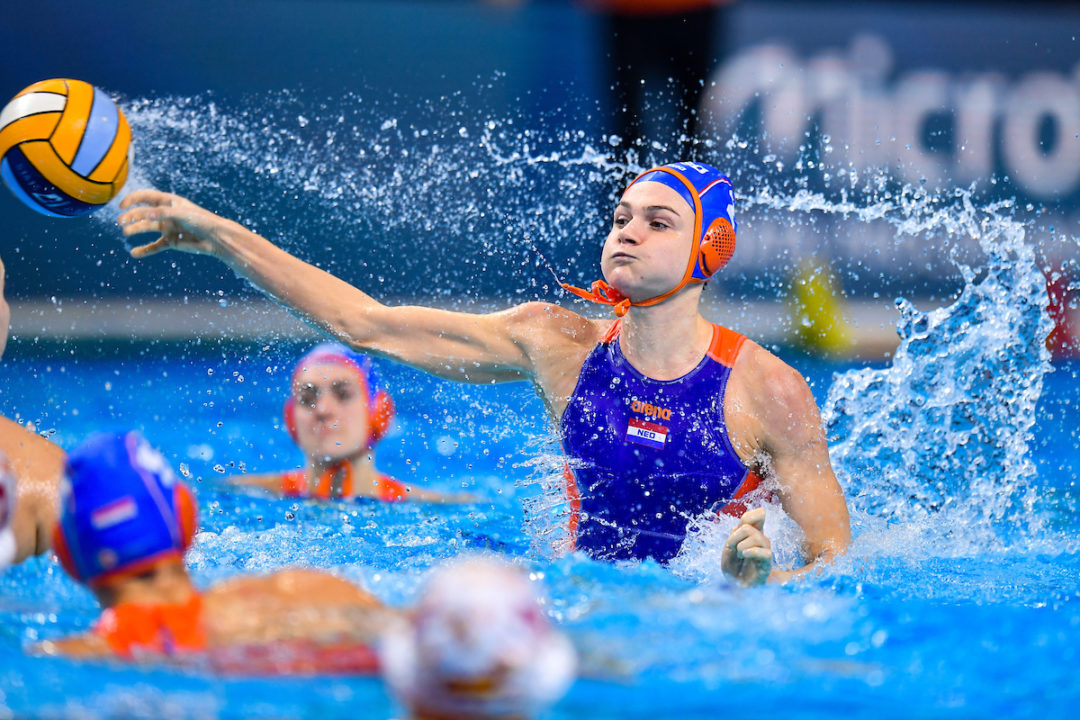 The Netherlands pulled off a truly astonishing victory over the South Africans to move to 2-1 in Group A play. Stock photo via Andrea Staccioli / Deepbluemedia / Insidefoto

The Netherlands pulled off a truly astonishing victory over the South Africans to move to 2-1 in Group A play. Domination is an understatement – perhaps obliterations is a more appropriate word. Netherlands led 16-0 at halftime, and 25-1 going into the 4th quarter. Ending with a 33-1 final score, Netherlands gain momentum as the knockout round approaches.

Although the score was so lopsided it hardly mattered, it should be noted that Netherlands goalkeeper Joanne Koenders put on a performance for the ages. With 10 shots coming her way, Koenders saved 9, only letting a single shot through. Netherlands had 5 players shoot 100%, a mesmerizing stat.

After the loss, South Africa moves to 0-3 in Group Play, and their hopes of advancing are all but lost.

The other Group A match of the day saw Spain score a decisive victory over Australia. The match stayed extremely close through the first half of play, with Spain leading 7-6 at half. A big 3rd quarter saw Spain outscore 4-1, giving Spain an 11-7 lead with a quarter to go. Spain again outscored Australia in the 4th quarter, 4-2, resulting in a final score of 15-9. The win moves Spain on to 3-1 in Group Play, putting them safely into position to advance.

The match came down to shooting, largely speaking, and Spain was significantly better in that category. Spain got off 28 shots to Australia’s 24, but Spain got 15 shots in, while Spain only had 9. That’s a shooting percentage of 54% for Spain, compared to 39% for Australia.

Spain’s shooting edge mostly came from excellent defense, including blocking and deflecting shots. The Spanish goalkeeper, Laura Ester Ramos, had a pretty tame outing, saving only 4 of the 13 shots that came her way. That’s a save percentage of just 31%. Nonetheless, Spain easily got the win, and is sitting pretty as things currently stand.

Group B: USA Scores Big Win Over Russia to Move to 3-1

USA grabbed an 18-5 victory over the Russian Olympic Committee, moving into 1st place in Group B, and a 3-1 record. That leaves the Americans in excellent position as we move into elimination rounds.

The US jumped out to an early lead, scoring 5 points in the 1st quarter to Russia’s 1. The Americans led 9-3 at half, then outscored Russia 9-2 in the 2nd half, for a huge victory. Russia had an abysmal shooting day, landing just 5 of 30 shots, for a shooting percentage of 17%. The shooting woes were compounded by Russian goalkeeper Evgeniia Golovina’s rough day. Golovina saved only 7 of the 25 USA shots that made it to her.

The game was tied 7-7 at halftime, but Hungary outscored Japan 10-6 in the 2nd half. Both goalkeepers had tough assignments, only saving 32% of the shots that came their ways. Ultimately the difference came down to Hungary getting 25 shots to the Japanese keeper, while Japan only got 19 shots to the Hungarian keeper.