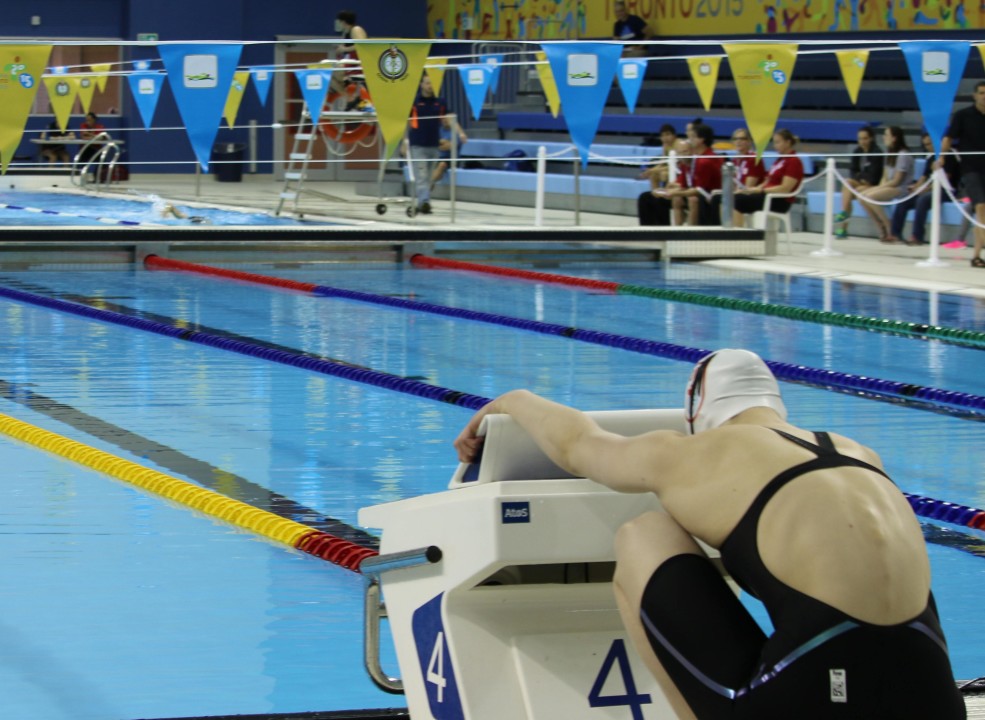 Penny Oleksiak started the night out smoothly with a rocking 2:08.06 performance in the 200m butterfly. Predominately known for her sprint freestyle and fly, Oleksiak managed to put her name on the record books once more as she downed the previous 15-17 age group record in the event. Current photo via Jacob Cohen

Penny Oleksiak started the night out smoothly with a rocking 2:08.06 performance in the 200m butterfly. Predominately known for her sprint freestyle and fly, Oleksiak managed to put her name on the record books in another category as she downed the previous 15-17 age group record in the event.

Oleksiak is quickly on the rise to becoming one of the top female swimmers in Canada.

Osvald Nitski of Oakville secured a win in the boy’s version of the event and by doing so was the only swimmer in the field to post a time under two-minutes.

Nitski was a 1:58.86 at the wall to take down Montana Champagne. Champagne was a 2:00.41 for silver. Kade Wist finished third in 2:01.44 representing McGill University.

No record was safe from the Canadian girls tonight as Danielle Hanus bettered her Canadian record from prelims in order to win the 100m backstroke.

Hanus was a 58.00 this morning to smash her own record that she set last year at the inaugural Ontario Junior International. Tonight, Hanus rocked a swift 57.63 to once again lower the mark and take down Britain’s Kathleen Dawson.

Javier Acevedo took down Michael Andrew for the first time this weekend in order to win the boys 100m backstroke. Out fast, Acevedo managed to get the better of Andrew with a 51.63 performance.

Andrew was second overall by a slim margin, clocking in at 51.97.

That performance for Acevedo bettered his own 52.33 Canadian record performance by a long-shot. In November at the Age Group International, Acevedo rocked a 52.33 to set the record. Now, less than a month later, he’s taken seven-tenths of a second off that mark.

Both Acevedo and Andrew were well ahead of the rest of the field. Craig McLean was third way back in 55.05.

Olivia Anderson of Etobicoke clocked a strong 4:05.99 performance in the 400m freestyle in order to secure a gold medal over Island Swimming’s Mackenzie Padington.

Rafael Davila got some vengeance for Island Swimming in the men’s mid-distance swim as he grabbed the win by almost four seconds.

Harriet Cooper of Britain snagged the win in the girls splash-and-dash with a 24.86. As the only swimmer to break 25-seconds tonight, up-and-comer Kayla Sanchez touched for silver in 25.12.

With that time, Sanchez was just four one-hundredths of a second shy of Penny Oleksiak’s 25.08 Canadian age group record in the 13-14 category.

Rebecca Smith of RedDeer rounded out the top three with a very solid 25.38 swim.

Michael Andrew had to wait until a lot later in the competition tonight in order to get a win.

Andrew won the boys 50m freestyle final in 21.70 making him the only swimmer in the field to crack 22-seconds. Andrew was just 0.01 seconds shy of the 21.69 performance that he threw down in prelims.

Acevedo, who set the Canadian record in the 100m backstroke earlier in the night, finished second in 22.64.

It was British domination in the boys 200m breaststroke final as Edward Baxter and Charlie Attwood went 1-2 in order to put their mark on the podium.

Ryan Telford was right with Attwood at the wall, but wasn’t able to get past him as he settled for the bronze medal in 2:13.84.

Danika Huizinga was a 26.47 tonight in the 50m butterfly to take home the gold. Laura Stephens and Claire Maiocco finished behind her in 26.75 and 27.27 respectively.

Michael Andrew and Javier Acevedo had one final battle this evening which resulted in Andrew once again coming out on top.

Andrew clocked a 23.51 in the 50m butterfly final to beat Acevedo by almost a half-second. Acevedo finished second in 24.08, almost matching the 24.09 swim he put up yesterday in the 50m backstroke final.

The above article excluded coverage of the Mixed Medley Relay which was the first event of the night, with the Trinity Prep Aquatic foursome of George Reuter, Seif Refaat, Claire Maiocco and Caroline White coming away with the gold medal in a time if 1:48.74. The most notable leg being Claire Maiocco’s 26.13 fly.