The Key to “Easy” Fly 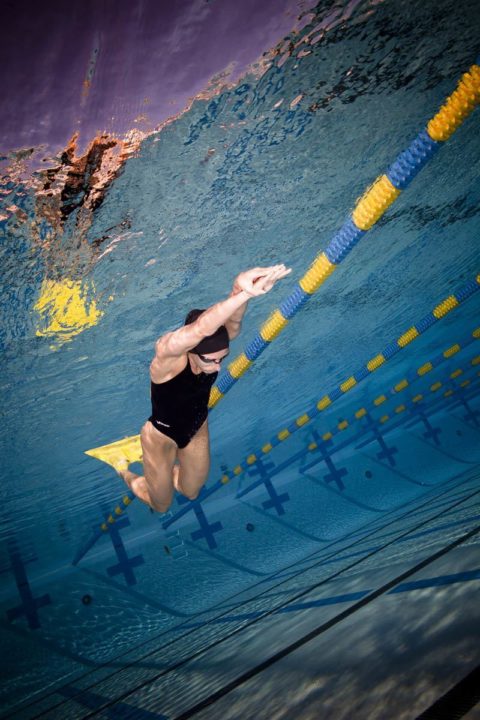 There is a considerable degree of difficulty associated with Butterfly, but poor technique can often be attributed to incorrect coaching methods.

Hali Flickinger, #SwimON: “When the world slowed down, we never turned off. We never lost sight of our goals– we adapted & got creative.”

#SwimON: “When the world slowed down, we never turned off. We never lost sight of our goals– we adapted & got creative.”

Goggles are an essential part of all competitive swimmers equipment, but often when the straps are too tight they can cause “swim goggle headache”.

Butterfly is undoubtedly one of the hardest strokes to learn in swimming. The amount of strength exerted with every repetition is intimidating to even many fans of the sport, let alone to the swimmers who compete in it. Although there is a considerable degree of difficulty associated with swimming good Fly, the poor technique we see too often can also be attributed to incorrect coaching methods. It is common that coaches will try to “run before they walk” with Butterfly, asking their young swimmers to complete many repetitions without having the proper technical tools to succeed.

When taking a quick look at the Butterfly stroke, one could determine that the hallmark of great swimmers is a low body position during the recovery phase, with the chin almost skimming across the surface as they move forward. The ability to loosen the upper body and to give the illusion of “relaxation” during Fly is only possible due to a great amount of core stability and propulsion under the water. It is critical to develop the techniques under the water before refining the ones that happen above the surface.

The Butterfly tempo and stroke are dictated by the rate and position of the body in the water, not by the arms. A great way to test this is to try to complete a butterfly spin drill, moving the arms as quickly as possible. You will quickly become out of sync because the body will be out of position for that phase of the stroke. On the other hand, building the stroke tempo by decreasing the amount of time in between kicks will automatically force you to increase the rate of your arms. Butterfly is a short-axis stroke, and therefore, is completely dependent on the movement of the torso.

To hone in on the stabilizing and propulsive muscle groups, it is often a good idea to add a larger driving surface to the dolphin motion. The Foil Monofin works well for this because the large single blade adds resistance evenly to both sides of the kick. The lower back and abdominal muscles will be engaged as you change directions, and exponentially so as you reach high speeds underwater. The large muscle groups in the legs are also fired to drive the fin up and down. Creating muscle memory and endurance throughout the entire Butterfly motion will help train the signature “easy” Fly recovery above the water that we expect from elite athletes. As previously mentioned, kick rate and body position are the forces that drive the best Flyers forward and make it possible to relax the shoulders and to fully extend along the surface of the water.

So, how are you teaching Butterfly? Are you giving your swimmers the tools to develop the most efficient stroke possible? It’s never too late to start training the right way, with the FINIS Foil Monofin.

Oh, so I”m going vertical because my problem is that I don’t have size 30 fused feet!

No, but probably are not in a good body position! Try engaging your legs and your core! The Monofin is simply a tool to improve that learning curve.

if you don’t race with fins, then don’t train with fins. Fins, kick boards, pull bouys, paddles, etc…are all like training wheels on a bike. just work harder on ur kick. no toys needed.

That’s one way to look at it. People are different and need different things to succeed. However, I can assure you that every member of the US Olympic Swim Team uses everything you just listed off on a daily basis: fins, kick boards, buoys, paddles.

On dry land you can get into really great shape using just your body weight. But at the same time people recognize that adding resistance through weights, bands, etc. can get you to where you want to go faster. Adding resistance in the water and focusing on specific muscle groups is something that every elite swimmer will do during training.

I understand your point, but I also think the key is to not get carried away with usage, and do not become dependent. I see way too many people at my pool using fins for their entire practice every. single. time. My aunt is one of those people, and is also the only one I can chide about it.

Training tools are great, and just that; tools. Don’t become dependent and you’ll be fine.

You’re right, Ashley. It is very possible to become too dependent on equipment, especially fins.

Mini bus- I don’t come here often, but when I do, it’s to read comments from ppl like you.