The International Field Dominates on Final Night in Santa Clara. 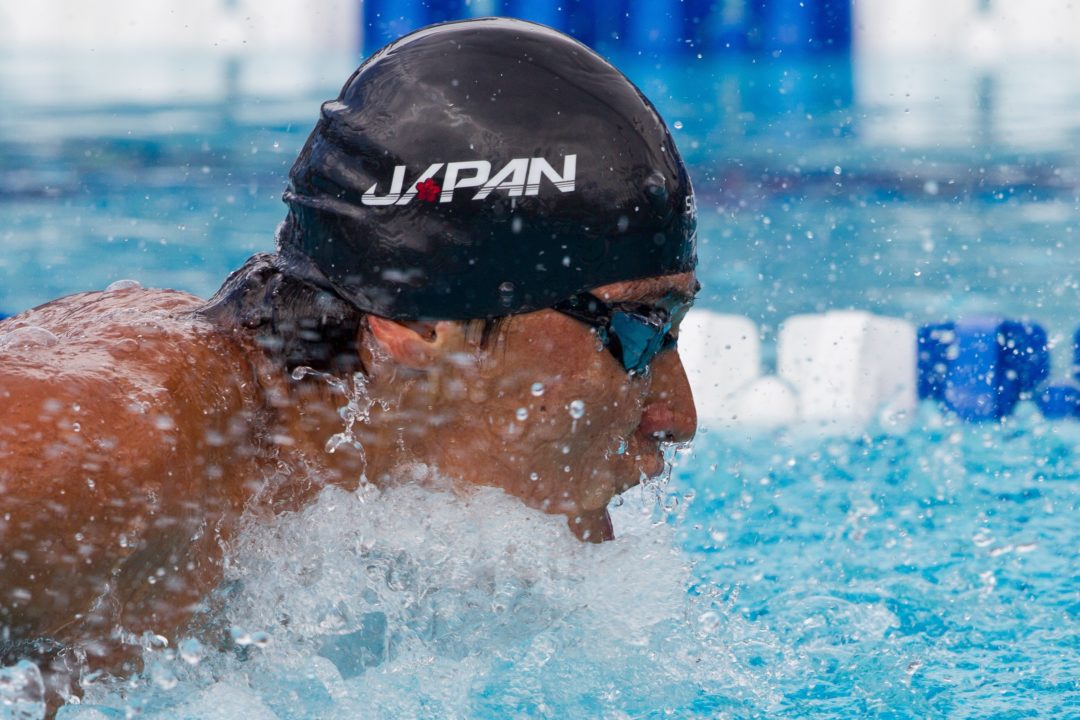 The final session showcased the international field at the Santa Clara International Invitational. Only one American made the top podium on Sunday night.

Natsumi Hoshi of Japan started off the session with an impressive win in the Women’s 200 Butterfly, clocking a 2:07.32. She had to run down Jasmine Tosky, of Palo Alto Stanford Aquatics, who lead the field out with a blazing 1:00.9 on the first 100. By the final turn Hoshi had taken the lead for the first time and extended it with a 32.9 on the final lap. Tosky held on for second and even though the last lap was 35 seconds of pain, she did clock a personal best of 2:09.66. Kim Vandenberg rounded out the top three with a 2:10.02. Hoshi has the fastest time this year in the event, 2:04.69.

Her Japanese teammate, Takeshi Matsuda, owns the top time of 2012 in the Men’s 200 Butterfly and like Hoshi he was dominate on Sunday evening in Santa Clara, winning the event in 1:54.66. Nick D’Arcy of Australia has the 2nd fastest time of the year (1:54.71) and he finished 2nd in the race with a 1:56.43. D’Arcy was challenged on the final 50 by Stanford’s Bobby Bollier who ran out of room and touched third with a 1:56.77.

Canada’s Scott Dickens won a stacked championship final in the Men’s 100 Breaststroke with a time of 1:00.69. Glenn Snyders of New Zealand turned just one one hundredth of a second behind Dickens at the half way mark, but was unable to match him on the back half taking 2nd in 1:01.44. Kosuke Kitajima, who is the only man this year who’s been under 59 seconds, touched 3rd with a 1:01.56.

Three medal hopefuls from three different countries claimed the top three spots in the Women’s 100 Backstroke. Emily Seebohm of Australia touched first in 1:00.00 in front of Canada’s Julia Wilkinson, 1:00.45, and Natalie Coughlin, 1:00.83. Coughlin appeared to have the lead coming off a monster turn, but couldn’t maintain it on the home stretch.

Ashley Delaney of Australia lead the Men’s 100 Backstroke from start to finish, taking the top spot on the podium with a 54.89. His countryman Hayden Stoeckel touched 2nd in 55.51 and Randal Bal  grabbed the third spot on the podium with a 56.03. Anthony Cox, who trains with Dave Durden at Cal Aquatics, had the 2nd fastest time overall, from the B final, with a 55.07.

Caitlin Leverenz of Cal rode the momentum from her signature breaststroke leg to win the Women’s 200 Individual Medley, avenging her 2nd place finish on Saturday night in the 400 IM to Australia’s Stephanie Rice. In both races Rice had the lead going into the back to breast turn, but on Sunday Leverenz emerged from her pull out with the lead and held on for a winning time of 2:10.81 to Rice’s second place time of 2:11.18. Madeline Dirado rounded out the top three with a 2:13.70.

Tyler Clary’s early departure lead to a one-two finish for Japan in the Men’s 200 IM with Ken Takakuwa winning in 2:00.55 in front of Yuya Horihata’s 2nd place time of 2”01.44. Takakuwa was out first in the fly with a 25.6 to Horihata’s 26.9 and that was the difference in the race as their splits were fairly close the rest of the way. Third place went to the Marin Pirate’s Scott Weltz.

Lauren Boyle of New Zealand took the lead on the third 100 and never looked back in the Women’s 800 Freestyle winning in 8:29.44. She demonstrated great control splitting 32 lows through the 500 where she found another gear and held 31s until her final 50 where she dropped a 30.6. Canada’s Alexa Komarnycky finished 2nd with an 8:32.68 and Andreina Pinto of Gator Swim Club finished 3rd, stopping the clock at 8:33.28.

I am really impressed with caitlin leverentz in that she does’t ‘protect’ herself and swims anything/everything. Last night, she was facing the defending olympic champion in the 2im and caitlin still swam the 200 fly before the im. i see that this will benefit her down the road at Trials and Olympics!

I was surprised by Clary’s swims today, especially after yesterdays swims (2 back/4im) . He has been pretty consistent this spring.

As always, Great recaps SwimSwam-
The typical question that probably always gets asked each quadrennial has to do with:
Veterans vs. new up comers.
After this weekend’s final 2012 Grand Prix meet going into Trials, that question is clearly resurfacing- Especially based on the current 2012 times from a few of our ‘older’ swimmers.
I’m a big fan of Natalie, Katie Hoff, Kate Zeigler, to name a few, and appreciate their success for Team USA over these last past 10 years…but right now, I see their path in qualifying to London, very difficult.
We all aware in life that nobody can rest on their previous laurels or achievements and this sport definitely reiterates that. I’m… Read more »

Dickens has been on fire since he qualified for the Canadian team. He’s going to be fast once he gets some rest. He usually doesn’t swim anywhere close to that fast in-season. #canadianbias

Nadador, there was some trouble at the start of the 100 backstroke. I think Federico Grabich, of Argentina, was putting his toes over the edge and didn’t understand when the starter told him to lower his toes. That’s just what it looked like on the webcast.

Hoshi and Matsuda will make some noise in London.

Coughlin always has great starts/breakout/turns. I hope she hits taper right for London (Again, she will have to make the team first…why, oh why U.S. Trials is at such an awful date).

Men’s 100 back had some problems at the start. The referee asked people to move away from the wall many times. It appeared that someone from lane 7 was doing something not right. Well – why didn’t he get D’ed? I am saying this bc it obviously was detrimental to a faster race.

Leverenz did what she has to: stay within striking distance after the backstroke, then run away in the breaststroke leg and hold on. If she lets… Read more »

Your observation about Leverenz is spot on.
That’s what happened to her in the 400 IM: she let Rice opened up too much gap after back.

It’s the starter’s responsibility to observe that the toes are not curled over the gutter…however, this is a rules infraction only if the feet move up after the start and this is observed by stroke and turn who then has this jurisdiction. Hence, the verbal “reminder”…..but no DQ.

…great recap, Garrett! Wish I could’ve been there to see Caitlin Leverenz. I think she’s going to perform in Omaha…a great story after her 08 run.